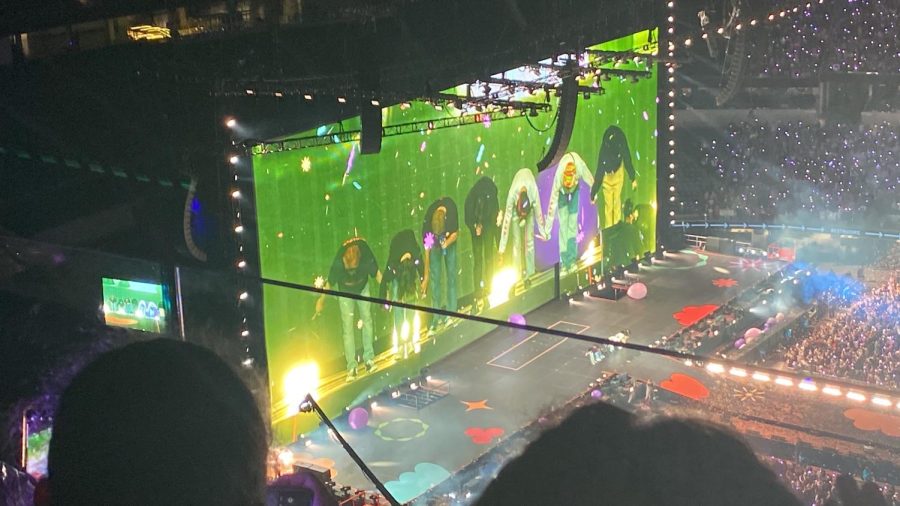 The amazing performance that ended the night made fans cry.

After waiting two years to perform due to the pandemic, BTS was able to hold their very first live concert at the Sofi Stadium on November 27.

BTS kicked off the four-night takeover on Saturday night with an enormous amount of excitement depicted through the entire four shows of the concert being sold out. Many ARMY fans were thrilled and even packed into the venue. There were fans running everywhere trying to purchase merchandise and food before the show kicked off. It was hectic but totally worth it, and it almost felt like a marathon rushing to the seats before the concert began.

The concert took place at seven-thirty p.m and ended at exactly ten-thirty p.m. Every second was worthwhile and absolutely exhilarating.

The concert, “Permission To Dance”, consisted of a rife of confetti and smoke machines placed everywhere across the stage enlightening the vibrant energy and mood in the room. The overall atmosphere and dance performance were all too incredible, it felt like a dream. The dance moves and vocals performed were amazing, but it was the power of the seven BTS members Jin, Yoongi, RM, Jimin, Taehyung, J-hope and Jungkook that truly are what ruled and made the night.

The production of this concert was absolutely insane. The bottom tier of the seating was completely packed. As your eyes examined each row, you were able to see there were no empty spots at all in any of the four shows. Part of the production was the enormous screen that was presented from the front row and the upper levels and this allowed everyone in the arena to get a closer and much more personalized experience of viewing their favorite artists perform. The arena held exactly the max capacity, which was 70,000 people.

In the VIP section, many people seated within that area were talking about how they could feel the heat from the pyrotechnics. This only took place during the performance for “Dynamite” which had fireworks, and “Burning Up” which featured flames.

In addition, the stage was built in the shape of a T. This allowed the band members to give the fans a full 360-degree view, but also have many encounters with the entire audience within the arena. The audience had the opportunity to see the breathtaking performance during the songs “Boy With Luv” and “Butter.”

Throughout the entirety of the night, BTS was able to keep ARMY fully engaged. The choreography, background props, lighting and even sound were all incredible. BTS is known for their one of a kind and unique, stunning style of clothing. Sure enough, the boy band did not disappoint and came through with astonishing outfits throughout the entirety of the night. The night started off with BTS entering the show with all white and silver outfits, for the “On” performance. The next song played was “Black Swan” with entire black outfits which made the crowd go wild during the performance. During the performance “Dynamite” the outfits were based on the ’70s style time period and included many light colors. When performing “Permission to Dance” the style of clothing switched to many ’90s inspired outfits that included denim, backward caps and even multicolored jackets. During the second show, BTS had a guest artist, Megan Thee Stallion, who sang the song “Butter” along with them.

The performance that truly touched everyone’s hearts is when the boy band performed “Life Goes On.” The scene truly was able to symbolize the hardships faced during the pandemic that many faced during COVID-19.

Although BTS had amazing outfits, ARMY also came through and went above and beyond with their outfits prepared for the purpose of the show. Many fans came with bold, magnificent outfits, such as purple glitter and sparkles that can be seen in the distance during the show. The fans specifically did this to captivate the specific different eras of BTS’ musical journey from the beginning to now. The fans even showed their support through posters and customizing their own clothing to support BTS.

BTS was able to use a much safer way in order to interact and get close with fans while off the stage. The band used two Boom Lift machines and split up. Three were in one cart and another four of the members were on the other cart. They even interacted with the fans in the higher seating in the arena. The seven members split during the performance of “Telepathy” and went around the outer rim of the floor seats. BTS also did this in order to give the second and upper levels a much better view of the performance but also the chance to interact much more with everyone, including the fans high above in the arena.

It was then J-Hope’s words that had deep utter heartache. He twinkled his eyes and fans could tell he was holding back tears. He stated while his voice cracked in between sentences, “Everything was so uncertain, I was afraid my fears might become real.”

The last and final statement is what made fans cry, (including myself) due to band leader RM’s final last words. “I don’t know when we can come back, but I feel so blessed and grateful that I can do this during this crazy time. These four nights are so precious,” RM said. “I’ll be even better when I’m 30 or 35, 40.”

After giving the last final words of his statement, he then took off his sunglasses to then wipe his tears and gave the crowd a peek of his gorgeous dimple smile that he served with one last joke.

Once the group finished their last performance with their latest song “Permission to Dance” the band surprised fans by bringing out a guest, Coldplay’s Chris Martin. This then turned the stage deep blue as the solar system began to float throughout the stadium. ARMY fans who had army bombs played an enormous role in this, they represented the stars in the solar system.

If there was only one moment to capture their concerts, it would have to be a sea of ARMY stars circling around with BTS, which took place in the middle of the Sofi Stadium. This concert was nothing but absolutely spectacular and mind-blowing. This concert is something people will remember forever, but also look back on as a life-changing experience.