The Dragons of Drama Club 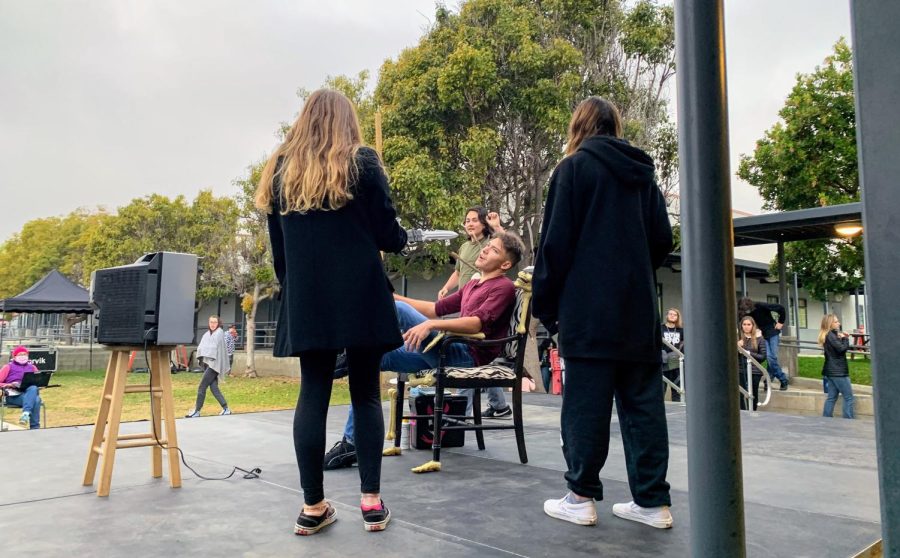 The cast members of "She Kills Monsters" shine on the newly built stage in the quad.

When walking through the halls at Foothill Technology High School (Foothill Tech), it’s hard to ignore the bright green posters taped to the walls and painted scenery aside the walkways. The vivid imagery of She Kills Monsters signifies the upcoming fall production of the Drama club— as preparations unfold before opening night, learn how the cast and crew have brought the show to life since the fall of 2019.

Foothill Tech’s Drama club has been run by Mrs. Kindred, a beloved Foothill English teacher, since 2018, as well as from 2003 to 2010. The club allows students to gain experience in acting, directing and theatrical production: participants can join either the cast, where they learn lines and choreography to play roles in the show, or the crew, creating sets and managing technology backstage to ensure that the play runs smoothly.

“At first it’s been more relaxed,” says Billy Corcoran ‘24. “Slowly, since we’ve been getting closer to our [opening night], we’ve been getting more active.” He describes how members of the club work together to create, “a synergy. If someone makes a little bit of a mistake, the other person knows how to act and work with them.”

Will Oxford ‘23 perfectly summarizes the club’s process: “a lot of people working as one person to get something done.”

A benefit of Drama club is the personal growth attained by participating. “It’s taught me a lot about socializing with people and giving me more of an interest in theater,” says Oxford. “You learn how to talk in front of people and it helps your memorization,” adds Jared Lantiegne ‘22.

“This is the kind of club where you can actually get a sort of sense of family from,” says Clarisse Cortez ‘23. Dylann Overbaugh ‘23 also mentions the familial aspect of the club, saying, “it’s a nice little community.”

She Kills Monsters is a comedic yet sentimental story about a cheerleader who delves into a game of Dungeons & Dragons, the passion of her deceased younger sister, as a means to gain closure from her passing. “This performance is fun, it’s exciting, it’s hilarious at times,” says Cortez, “it has a deeper meaning to it than what’s on the surface.”

The production of She Kills Monsters has been in the works since 2019. Its original performance dates were set for April 1, 2 and 3 of 2020, just weeks after schools were shut down due to COVID-19.

“We put in a lot of work and dedication our first year and it got shut down,” says Overbaugh. “It’s cool to finally see the play come to life,” she concludes.

“This year, I knew that I wanted to come back and finish this show,” says Mrs. Kindred. Though the long-awaited return to the play is rewarding, “there is a little sadness,” among the happiness, “that the original cast didn’t get to do the show.”

“Finally being able to do the show again is awesome,” says Lantiegne, a veteran of the She Kills Monsters cast. Cortez emphasizes “the finally moment,” as the wait for opening night comes to a highly anticipated end.

“Bring a jacket, it’s gonna be cold,” says Mrs. Kindred, “but that makes it all the more exciting!”