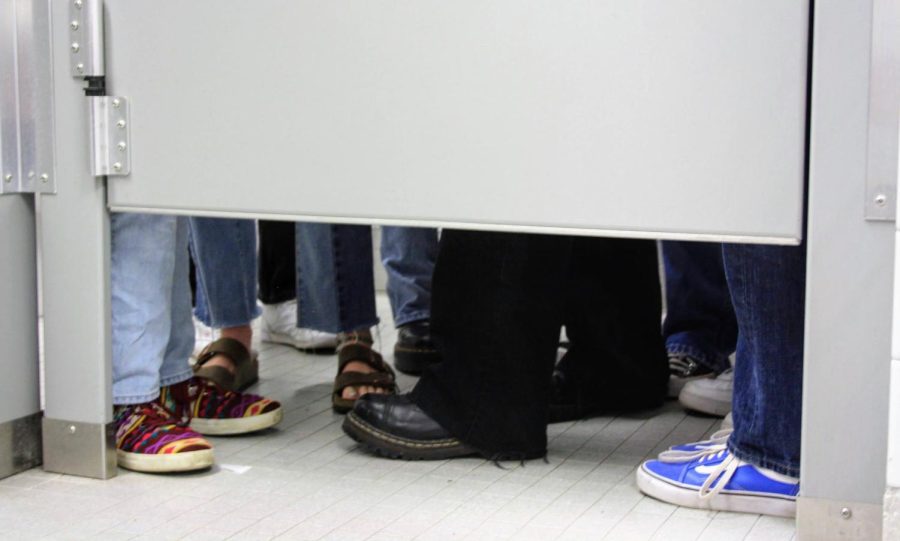 Students reenact what it looks like when they see their peers vaping in the school restrooms.

Editor’s Note: All sources’ names are altered names that were granted on conditions of anonymity. These sources agreed to discuss their personal relationships or opinions on vaping only on the condition that their names would be omitted or changed in the article. We have arbitrarily provided names for each anonymous source for clarity’s sake. More information on our anonymity policy can be found here.

Congregated in the bathroom stalls of Foothill Technology High School (Foothill Tech) is the school’s worst kept secret, mainly because it’s mango flavored. Smoking electronic cigarettes (i.e. vaping) is Gen Z’s poison of choice and the enclave of academia at Foothill Tech is no exception to the worldwide phenomenon. It can be summed up into a simple truth: Dragons vape.

Not as much as other schools. This was the resounding response from vapers and non-vapers alike about vaping at Foothill Tech. It’s easy to assume that vaping doesn’t fit into the overtly academic culture at Foothill but, “vaping is a part of the high school ecosystem,” says Hannah, a junior who doesn’t vape.

There’s a misconception that if vaping exists in schools, immense peer pressure to vape exists as well. Throughout high school, Hannah has found that pressure doesn’t exist at Foothill, at least not in the way some would think. She explains that other students don’t care whether or not you vape, but that sometimes young people impose pressure on themselves to vape. “Self-pressure,” she dubs it.

Sarah ‘22, who vapes outside of school, thinks that it’s just a symptom of the culture at Foothill, “I feel like the kids at our school aren’t the type to just keep holding it [a vape] to you and trying to make you do it.”

Brooklyn ‘22, who vapes at school regularly, offers her insight into peer pressure from the other side of the Puff Bar. She explains that if she offered someone a hit and they declined she’d respect their self-restraint, “I wasn’t able to say no […] I’m not going to think any less of them. I’ll probably think more of them actually.”

It may seem like the student body is indifferent to vaping, but not everyone feels that way. The clouds of candy apple smoke, which seem to be exclusively confined to the bathrooms, can be an imposition on others. Riley ’22, who dislikes vaping, explains that she doesn’t use any substances and that, “it doesn’t feel fair or right that I am forced to breathe that air where girls are vaping because it is the only way to use the restroom.”

Vaping, like any illicit activity, creates tension within a community. There’s a lot of grey area surrounding administrative crackdowns. It should be simple enough: the school’s disciplinary policy is right there in Foothills’ rules and regulations, but incidents are never that simple. The very logistics of vaping, as a group activity in bathroom stalls, brings up an important predicament. Five girls crowded together in a bathroom stall: one vape pen. Who’s responsible? Who actually vaped?

And in this scenario, is there such a thing as a bystander?

It would almost be more fitting to say that the peer pressure exists not necessarily to vape, but to put yourself in a bathroom stall where you could possibly be punished for vaping.

“When situations like this pop up, there’s not a reason multiple students should be in one bathroom stall,” says Assistant Principal Katie Tedford.

Tedford also emphasizes that in order for someone to be punished for vaping, there must be factual evidence that they vaped, “nothing can be inferred.”

She goes on to explain how hard it is to get factual statements from witnesses involved in instances of vaping. But in the age of social media, the perpetrators often create the factual evidence themselves.

Brooklyn is certain that there are some old videos of her vaping somewhere on her social media feed. The idea of administrators seeing them terrifies her, “because if they’ve got me, they’ve got me.”

Brooklyn and Sarah are sure they aren’t the only people who’d have a problem if vaping videos started leaking, “if some stuff got out, we’d all be in deep sh**. I feel like a lot of people would go down, it wouldn’t be just one person.”

The idea of administrators viewing their social media doesn’t sit well with students in general, even those who don’t vape, “it feels like an invasion of privacy,” Hannah says. But Tedford explains that it would be logistically impossible for administration to monitor students’ social media and that if administration has punished anyone based on something that they posted on social media, it’s because another student sent it in.

Among students, there’s a fundamental disagreement around reporting other students for vaping. Some feel a responsibility to report to administrators when they witness people vaping on campus, whether it be because vaping makes them uncomfortable, because they’re concerned for the vapers’ health or simply because they have a reverence for rules.

Still, the grand majority of students share Hannah’s view, “I don’t care if people are vaping, it’s not my problem.”

There is one fundamental thing that people seem to agree on. All of the interviewees independently brought up the link between vaping and mental health issues.

Brooklyn explains how vaping may have started out as a novelty, but for her and many of her friends, it evolved into an addiction.

Hannah stresses that it would be better if the administrators could focus on helping students address the root of their vaping instead of just leveraging consequences.

Riley summarized the connection, “I really think that the true root of the issue is that many teenagers have internal problems and are just looking for a way to escape.”