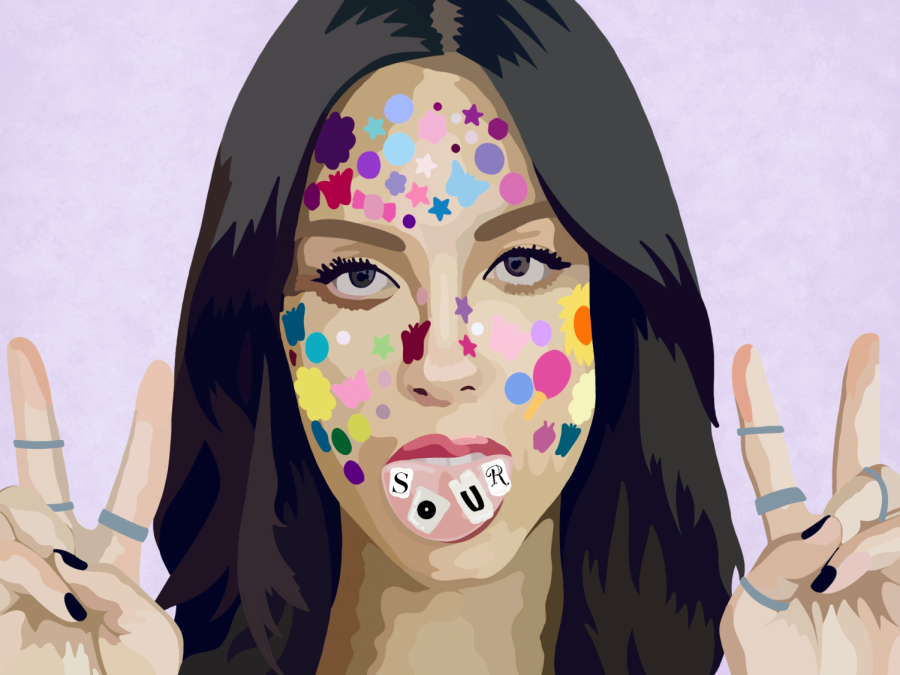 Viral hit, “Drivers License” by 18-year-old singer and actress Olivia Rodrigo, had fans going wild over how melodious it was. The song was being used everywhere and because of how quickly it became popular, Rodrigo decided to release a full album that included “Drivers License” as one of the songs.

On May 21, 2021, Olivia Rodrigo released her debut studio album, ‘SOUR’. The album was a success right off the bat, as its streams went off the charts. The album had over 2.6 billion streams on Spotify, and it exceeded the number of streams of Justin Bieber’s album, ‘Justice’, replacing it as the top album of 2021 (uproxx.com).

In the same month, the album was released, the first ten songs of the “Spotify’s Top 50” list were from ‘SOUR’. Occupying the top ten rankings were the songs “Jealousy, Jealousy,” “Favorite Crime,” “1 Step Forward, 3 steps back,” “Drivers License,” “Enough For You,” “Happier,” “Brutal,” “Traitor,” “Deja Vu” and “Good 4 U” (Forbes magazine).

Besides gaining popularity on Spotify, ‘SOUR’ became a trending topic on another large platform: TikTok. Some TikTok users expressed their love for the album by lip-syncing videos to the album’s songs. Others ranked the songs from their most favorite to their least favorite. This led the album to ramp up plenty of streams since people discovered that they all have different opinions about which ‘SOUR’ song is the best.

Additionally, many Instagram users admired the album. When Olivia Rodrigo announced the release of ‘SOUR’ on Instagram, the post received over three million likes and more than 30 thousand comments. Most of the comments were from delighted Olivia Rodrigo fans (also known as Livies), who were looking forward to seeing what the album had to bring to the music industry. Many Instagram users also expressed their admiration for the album by using quotes from it in their Instagram posts.

Here at Foothill Technology High School (Foothill Tech), ‘SOUR’ led to a mixture of opinions among students. Some students loved the album’s songs, while some believed otherwise.

An anonymous Foothill Tech student enjoyed listening to the album because they liked how much variety it gave, “[since] each song [had] a super different melody”. They also “enjoyed how well the lyrics flowed together” and pointed out that other albums weren’t able to achieve as much popularity as ‘SOUR’.

On the other hand, Moia Kingsley ‘24 had a contradictory belief. She remarked on how “all of [the album’s] songs are depressing,” which was a common critique among online users. Kingsley also added how she had “seen TikToks of [people] crying to [the album’s] music” because it was so sorrowful.

Overall, ‘SOUR’ received a sweet but slightly sour response from fans and casual listeners alike. Although it was the most-streamed album of May 2021 and its fame rose rapidly, some believed Rodrigo’s songs were overplayed and too emotional. Despite all of this, ‘SOUR’ helped Olivia Rodrigo rise to the spotlight, and it sparked much excitement around Livies, especially at Foothill Tech.