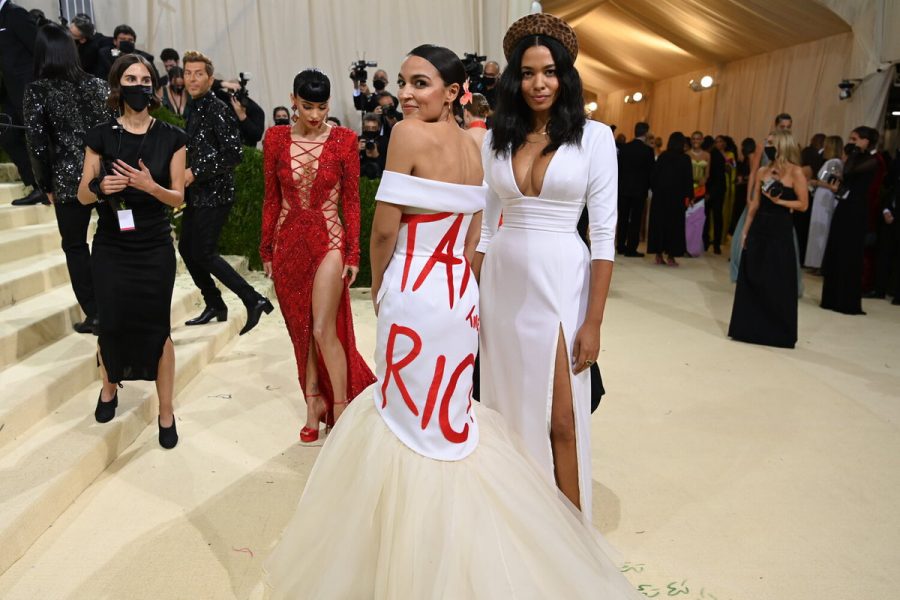 Occurring on Sept. 13, 2021, the Metropolitan Museum of Art in New York held what’s known to be fashion’s biggest night—the Met Gala. The event was hosted by award-winning actor Timothée Chalamet, Grammy champion Billie Eilish, four-time Grand Slam singles champion Naomi Osaka and our youngest inaugural poet in U.S. history, Amanda Gorman. The event was overseen by British Journalist and fashion icon Anna Wintour, who has led the industry for decades. After rescheduling due to COVID-19, the Met Gala occurs in the midst of the semi-annual fashion month, rather than it’s typical occurrence in May. The theme for the night was “American Independence”, which brought forth judgmental eyes as well as the praise of certain individuals.

Breaking gender norms has become the new look for our current generation of celebrities. Demonstrating this progress was comedian Pete Davidson, who wore a black pencil skirt paired with a white blazer, prompting GQ Magazine to call it a “style evolution”. This recent breakout of confidence has been empowering for not only those leading the break in tradition, but for the viewers as well. The bending of norms doesn’t just end with the men, as singer Kehlani, arrived in a suit filled with 70,000 crystals, adding a powerful image to the show.

In breaking these norms, our society has been pushing everyone to discover their true self. Showcasing this cultural development was Lil Nas X and Saweetie. Though many attendees did not fully grasp the concept for the gala, Lil Nas X did, and he had one of the best leading interpretations, consisting of two outfit changes. He arrived in royal inspired attire, broke out into a suit of golden armor and finalized the look with a gold and brown crystal suit. When asked about his transformation, Lil Nas X stated it resembled his personal growth in the spotlight and becoming the truest form of himself. “Personally, I took the look as the American journey into freedom. The royal cloak that guarded the powerful suit of armor, with a hidden layer of character, can be a symbolic summary of our American history,” he explained.

Saweetie’s interpretation of the theme was just as admirable, as she arrived in a full body crystal dress draped with “The Black American heritage flag and one of them (dress tails) is a Filipino flag,” she proudly stated: “That’s what makes me an American girl”. This outfit was one of the most on target to the theme, considering that our country was built on immigrants and the paths that they blazed for us. Lil Nas X and Saweetie both flared their individuality, which was my favorite aspect to the theme as America prides itself on its originality as a country.

As the night progressed, U.S. Representative Alexandria “AOC” Ocasio-Cortez redirected all eyes, while she voiced her beliefs through fashion, flaunting a dress with the statement: “TAX THE RICH”. In a room filled with billionaires and the elitists of our society, AOC sent her message to the country. A table at the Met Gala ranges from $200,000 to $300,000, though with her congresswoman status, AOC was invited with no cost. Her message perfectly hit the theme by using her voice as we in America are advocated to do, while reminding us of our disproportionated capitalist society we are under.

After being postponed twice due to COVID-19, many were left wondering if this year’s Met Gala was worth the wait. “It was disappointing…I expected to see more,” shared Layla Funez ‘22. “It was definitely not worth the wait,” added Emily Ruiz ‘23, however Ruiz reminded us that there will be another gala before we know it.

Most of the long anticipated fashion choices also failed to satisfy the public’s standards. “It was definitely too simple…everyone was dressed as though they were going to a regular Hollywood party,” Ruiz bluntly stated.