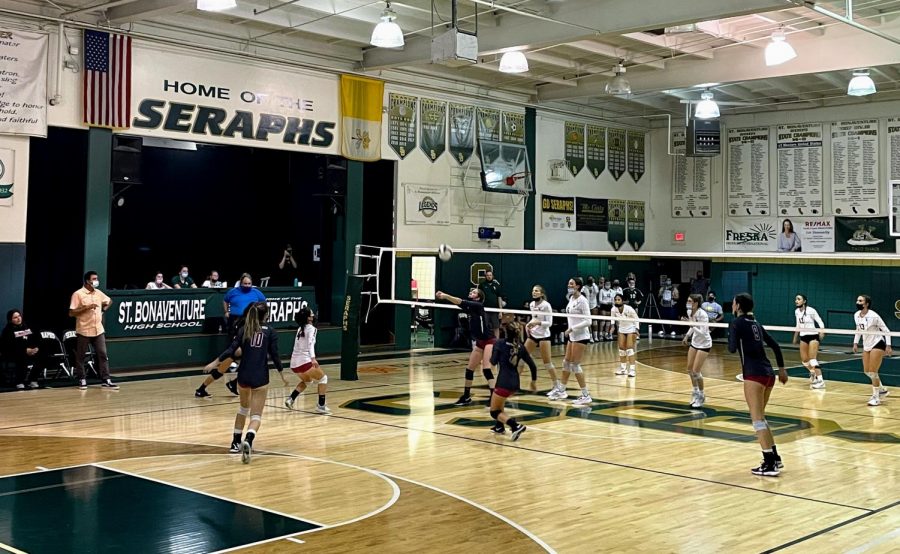 Aimee Kidwell '22 passes the ball into the air hoping for her teammates to score.

The stands filled as the Foothill Technology High School (Foothill Tech) girls’ volleyball team got ready for their rivalry match against the St. Bonaventure High School Seraphs on Sept. 9, 2021. They were focused and in deep concentration as they warmed up, getting ready for the exhilarating game ahead.

St. Bonaventure started with the first serve of the game, hitting a smooth ball before plummeting into the hands of the girls below it. Foothill Tech put in their highest energy, getting the first point of the game.

Seeming to be in a great mindset, Foothill Tech managed to win three points in a row before St. Bonaventure scraped up their first point. Both teams were not willing to back down, the ball going at top speeds through spikes and hits until the score was tied 5-5.

Foothill Tech took a slight fall, leaving the score to be 13-7, Saint Bonaventure racking up points and leaving the Dragons to scramble.

Foothill made beautiful dives, saving the ball from seeing the out-of-bounds line. The ball came at the players from all different angles, making it impossible for them to return so many times, leading to multiple points for the Seraphs.

After more sweat and hard falls, St. Bonaventure slowly crept up on the scoreboard, finishing the game 25-12.

Game two began, the first point going to St. Bonaventure. Foothill Tech did not let up and after a few points, Rebekah Sokoloski ’22 got the serve. The serve went just over the net and fast into the opponent’s court. She continued to hit five breathtaking serves in a row.

The Dragons were playing well, the libero, Adriana Rodriguez ‘23, catching hard hit balls coming towards her to keep Foothill Tech in the lead. Unexpectedly, St. Bonaventure made a few rough hits, tying the score at 11-11.

With Malia Juker ‘22 getting major blocks and hitting high speed spikes, she racked up a few points for Foothill Tech.

“I definitely could add a lot more energy like a lot of the other girls,” says Juker while reflecting on her personal performance.

After a few unlucky hits, the Dragons started to reap the consequences. With Foothill Tech trying to pull through, they were unable to get back their lead, finishing the second match 25-17.

Foothill Tech started with the serve, managing to get the first four points in a row. After some intense rallying, the score turned to 10-3, the Dragons pulling through with a stellar game plan. St. Bonaventure called a timeout and the Dragon fans went wild.

The game started up again and almost instantly, a Seraph got hurt. Walking off the court, the crowd saw that the score was 15-12, St. Bonaventure catching up.

Sokoloski set up next with a miraculous jump serve that could save the Dragons the game. With a turn of events, the scoreboard showed a tied score of 22-22; Foothill Tech was in trouble.

Saint Bonaventure pulled through to win 25-22, finishing the game.

Courtney Velarde ‘22 commented on the competition, saying, “I’m not going to put anything bad on them because they actually played really good,”

Juker echoed the sentiment, saying, “we could’ve definitely beat them in [game] three,” continuing saying, “I think we did really well overall.”

The Dragons will prepare themselves for the next game against La Reina High School on Sept. 15 at the Cabrillo Middle School gym.