It’s time to head to the polls: What you need to know about Gavin Newsom’s recall election 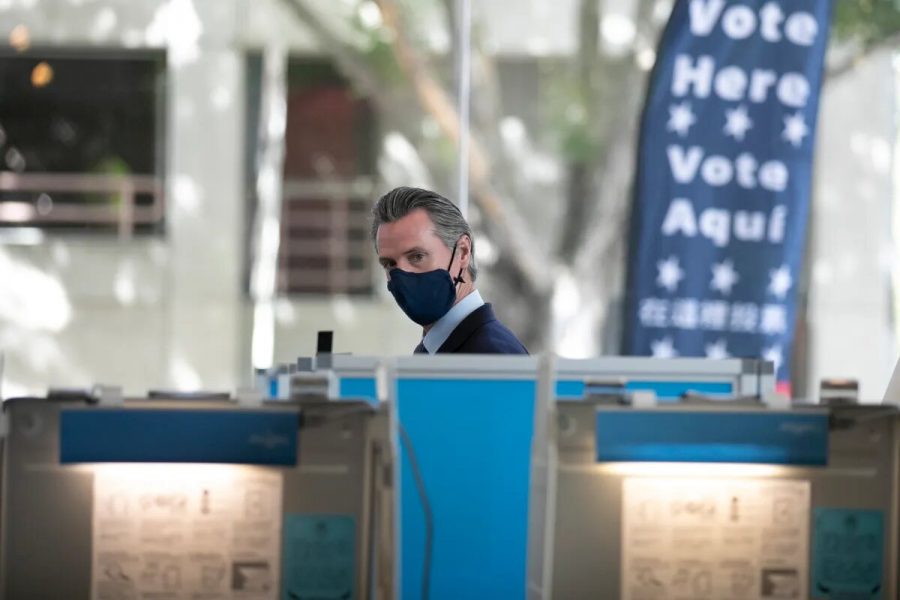 Gov. Gavin Newsom votes at the polls in his own recall election.

As Calif. Gov. Gavin Newsom reaches the middle of his first term in office, a recall election may soon divest him of his position within the next two months. The recall election will take place on Sept. 14, 2021 and mail-in ballots were sent to all eligible, registered voters during the month of August.

A petition started by California’s Republican party in June 2020 received over 1.5 million signatures after Newsom sustained criticism for dining mask-free at the height of the pandemic and received the 12 percent threshold to trigger a recall election in early 2021. The ballot will consist of two parts, the first being a yes or no to Newsom’s recall and the second being a selection between the 46 candidates running for governor.

Recalls and recall petitions are not uncommon in the state of California as there have been 179 attempts in the past 100 years, but only six passed with enough signatures for an actual election. If Newsom were to be recalled, the newly elected official would take the oath and remain until the end of Newsom’s original term of Jan. 2, 2023.

Among the 46 candidates featured on the ballot, the leading Republican candidate, Larry Elder, has raised 13 million dollars for his campaign, significantly more than his competitors. Elder is running under the position of broadcaster/author and served as a radio talk show host for “The Larry Show”. His latest press conference revealed his overall pitch to voters which focuses on improved education, lower crime rates and accountability for Black and Latino communities in California.

Democratic party candidates are outnumbered on the ballot with about 24 Republicans, nine Democrats, two Green Party, one Libertarian Party and ten unaffiliated. However, Hollywood actor Patrick Kilpatrick and Youtube star Kevin Paffrath are among some of the leading liberal contenders. Kilpatrick focused his campaign around adequate funding for schools, Medicare, homeless shelters and the environment while also promising a zero-tolerance crime policy and lowered taxes. Paffrath focused his campaign on new infrastructure, COVID-19 relief, an end to the homeless crisis and media transparency in government.

However, one name in particular may look familiar to students and faculty at Foothill Technology High School (Foothill Tech). John Drake, a former graduate of Foothill Tech, is running as a Democratic candidate with a campaign centered around the needs of the average Californian and has a vision to end bureaucracy in government.

Polling stations across California will remain open from 7 a.m. to 8 p.m. on election day, and results should be available in the hours following. Live results can be found here beginning the morning of Sept. 14, along with updates from major publications once all votes have been tallied.