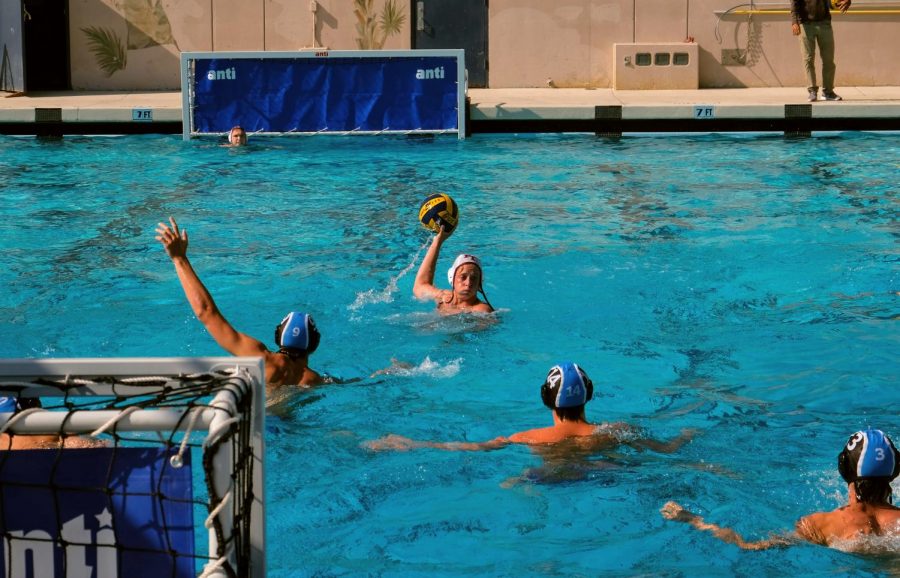 Ryder Hart '23 looks past the defense in hopes of scoring a goal.

As the Foothill Technology High School (Foothill Tech) boys’ water polo team jumped into the pool for one of their first preseason games of the year. Fans filled the metal stands, in stark contrast to a previous COVID-19 restricted season, Ben Zeko ‘22 saying, “our teams a little bit in disarray because of lack of a season last year.” The Foothill Tech Dragons prepared to face the Buena High School Bulldogs on Sept. 7 at the Bulldogs home pool in an intense match.

The scoreboard was set and the teams raced off for the first sprint, the Bulldogs gaining the advantage. With early fouls and a set passing piece by Ram Pierce ‘22, Ryder Hart ‘23 and Alex Jannone ‘22, the Dragons seemed to have the upper hand within the first two minutes of the game.

However, the Bulldogs managed to slip in a goal past Foothill Tech goalkeeper Zeko. He did not let this shake him, following with several blocks to support his team. Levi Davis ‘22 let the early goal fuel him, gaining fouls and earning a free shot with 3:36 left in the quarter, tying the match 1-1.

Buena took an opportunity close to the goal and sank one straight into the back of the net with 1:50 left in the quarter, making it 2-1. Zeko threw himself into the last minute of the game, blocking three consecutive shots before the timer went out.

The second quarter began and the Bulldogs came out strong. Multiple shots from both sides tested both teams’ defensive lines and the Bulldogs managed to get their third goal in just under two minutes.

Zeko shut down another shot attempt and saw an opportunity for his offense, throwing a long ball up the line to Donovan Hart ‘22, which was barely missed.

With just 14 seconds left in the quarter, the Bulldogs lob the ball over Zeko in a last shot attempt, finishing the first half of the game 4-1.

The quarter starts with Buena winning the first ball. Both teams play impressive defense while none of the shots taken make it into the goal.

Davis slots the ball into the goal to begin their hopeful comeback, but just seconds later, Buena manages to regain the point lost, making it 5-2. Hart comes back to smash the ball into the net with an assist by Davis. Buena wasted no time to respond. A quick change of possession, the Bulldogs managed to score once again, ending the quarter with a score of 6-3 in favor of Buena.

Zeko struggled with this especially, saying, “the shots that were taken on me I couldn’t have done much about because there wasn’t much defense happening around me.”

After more shot attempts from the Dragons, Foothill eventually calls a timeout with 4:42 left to try and snatch the game once and for all. The game started up once again, Jannone and Peirce working together to set up a left wing shot for Pierce, making the score 7-4 with four minutes left. A quick shot by Buena earned them another point, but Peirce continued his streak to slip the ball in, setting the scoreboard to 8-5, still with Buena in the lead.

The back and forth frenzy continued, with Pierce scoring yet again. With just two minutes left in the match and a score of 9-6, the Dragons struggled to shorten the lead by Buena.

Within the last two minutes of the match, Buena managed to score three times, overpowering the Dragon defense. But, Ryder Hart did not let this ruin his spirit.

He sprinted down the pool in a last second attempt, and went for a no-look shot behind his back right into the Bulldogs home goal with five seconds left on the clock. The crowd shouts in awe after the beautiful shot was executed. Despite the efforts, the game ended with a score of 12-7, the Bulldogs taking the victory.

Davis reflected on the match, saying, ”we need to go back at it as a team and work together.” He also added, ”hopefully we get better results in the future and can play Buena again.”

The Dragons are ready to dominate the next game with more preparation, teamwork and drive as they hopefully prepare to face off against the Bulldogs once again.