A concert to remember: Weezer, Green Day and Fall Out Boy 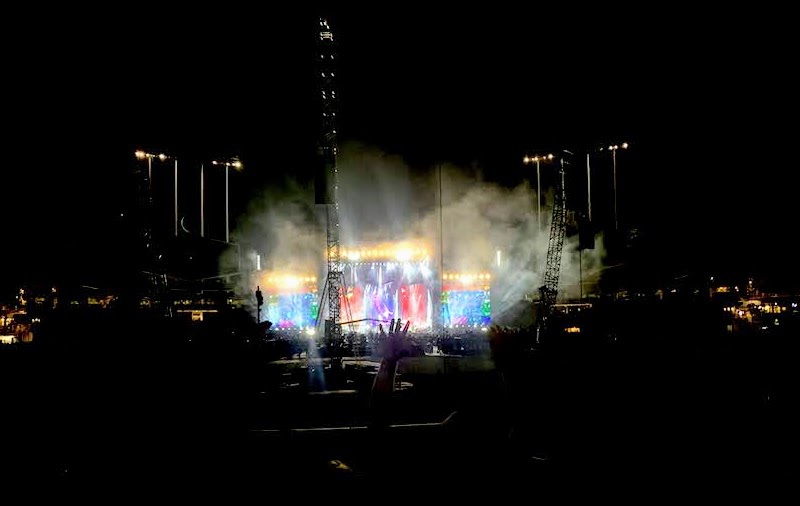 A fan raises his hand having the time of his life singing along with the band, Green Day.

At the Hella Mega Tour it was all about the cult of Green Day.

With their breakouts kicking off from 1987 to 2001, Green Day, Weezer and Fall Out Boy have taken over the modern rock genre. Together, the three bands fueled the rise of pop punk teens with an energy to last throughout generations. On September 3, 2021, fans in Los Angeles were able to witness the second to last day of the Hella Mega Tour, and it was a night to never forget.

The punk rock band, Green Day, formed in 1987 and has since been an international phenomenon. Starting out as a small band from the Bay Area, the rock band hit the charts through the success of their third studio album, Dookie, and had gained over 10 million listeners. Green Day members Billie Joe Armstrong, Mike Dirnt and Tré Cool have won nine Grammys and fifteen nominations. With 13 studio albums and over 200 songs, it’s impossible to not know the name Green Day.

Originating from Los Angeles in 1992, Weezer has applied their misfit attitude to any and all who can relate. With the lasting impression of the fan-titled “Blue Album”, the three-time Grammy winning band has led the pop punk genre with hits such as “Buddy Holly” and “Beverly Hills”. Despite their busy history of on and off hiatuses, the band has persevered and has continued to play just as smoothly as they did in the ‘90s.

Formed in Chicago in 2001, Fall Out Boy has brought love and energy to the world of rock ‘n’ roll and punk. With high-energy songs, any listener can find appeal. Hits such as “Centuries”, “Sugar We’re Goin Down” and “Thnks fr th Mmrs” are constantly played on the radio while containing over hundreds of millions of views on YouTube.

After waiting in line amongst an overflowing amount of people sporting ripped jeans, band t-shirts and eyeliner, fans buzzed as the daylight brought the opening band “The Interrupters”. Their energy and enthusiasm instantly caught the eyes and ears of fans as they scarfed down the infamous loaded dodger dogs and garlic fries. Among hushed whispers and smokey air, it was just the start of a night we would never forget.

Weezer frontman, Rivers Cuomo, gave LA the energy jumpstart that they needed. The entire set felt like a “Buddy Holly” music video reference, from Shriner’s business casual outfit to the ‘80s themed blue lightning backdrop. This all led to the highly anticipated performance of “Buddy Holly”, which the band closed with, leaving the crowd fulfilled and ready for the next performer, Fall Out Boy. “Do kids still listen to rock music?” the lead singer, Patrick Stump, asked the crowd. With an ecstatic roar, the answer was yes.

The highlight of the Fall Out Boy performance was when Stump began to sing “Centuries”, which prompted everyone to spring out of their chairs and chant the lyrics. Fireworks sprung up, illuminating the night sky and it felt utterly surreal. It was an absolute dream come true. The crowd’s energy was enhanced for the anticipation of Green Day.

Opening with “American Idiot” and Billie Joe Armstrong wearing the iconic red tie, Green Day caught the crowd the second they were revealed. Based on the zeal of the band, it was impossible to tell they had been performing for over forty years together. This energy was unmatched, truly as youthful as they were in the early days of the band’s formation. Armstrong’s voice had completely matched the sound of his first record.

Green Day was able to capture the wild roars of the crowd when they brought an overjoyed fan to the stage to perform alongside them. Fans screamed bloody murder at the hopes of being the one lucky person chosen to play guitar alongside their idols. Nonetheless, they supportively chanted the chosen fan’s name with excitement. Following his performance, Armstrong then gifted him the guitar that he played with.

Armstrong later turned to the crowd to ask us to “put away your phones, this is our chance to be together”. The proposition was given in response to COVID-19, stating that we have spent the past year staring at our screens, so instead, it’s time to appreciate the moment that we were sharing together, face to face. Before closing the night, Armstrong reminded us, “we are still alive, we are still breathing”. This led to the closing song, “Good Riddance (Time Of Your Life)”, reminding us that in spite of the pandemic, every moment we share with one another is precious.