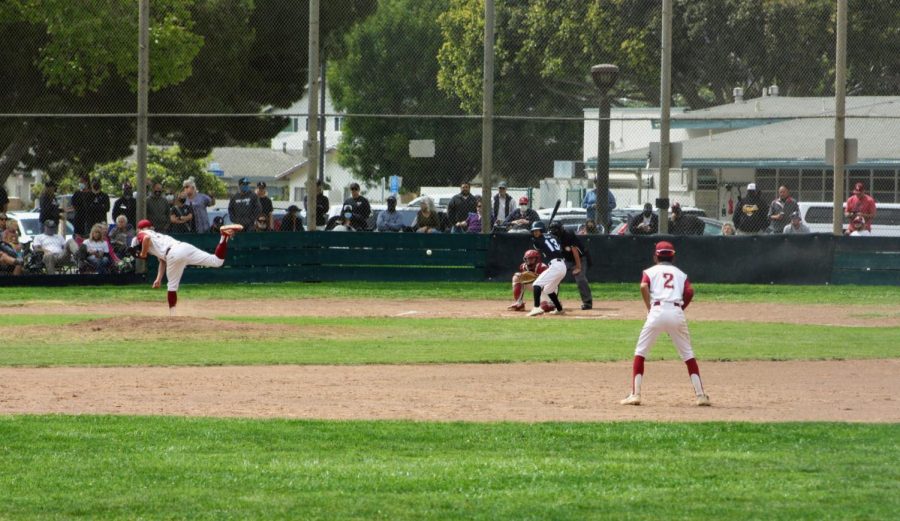 The stands and outfield at DeAnza Middle School were peppered with fans from both teams as the Foothill Technology High School (Foothill Tech) baseball team took on Buena High School in their first round of California Interscholastic Federation (CIF) on June 4.

The crosstown matchup was dominated by the starting pitchers for both teams who both stayed on the mound for all seven innings.

The Dragons had Joey Bishop ‘21 as starting pitcher, but Buena wasted no time getting on the scoreboard. Two singles in the first inning gave them a 1-0 lead, but Bishop was able to escape the inning with no further damage.

In the bottom of the first, Foothill Tech was unable to capitalize on a couple of opportunities to tie the game. Second Baseman Sagen Beltowski ‘21 reached base in a scary fashion after being pegged in the head with a pitch, but he was able to reach third base after advancing on a single from Zach Jackson ‘21.

The Dragons flew out on their next at bat to end the inning, leaving two runners on base.

The second inning looked promising for the Dragons after Bishop garnered a strikeout and groundout on the first two at-bats of the inning, but two consecutive errors by the Dragons infield allowed Buena to have runners on first and third.

Buena finagled a run out of the Dragons when their first base runner forced a pickle, and the Dragons were unable to throw out the third base runner stealing home. The next batter grounded out, giving the Bulldogs a 2-0 lead.

The bottom of the second yielded no offensive opportunities for Foothill Tech, with three quick outs coming on a groundout, foul out and strikeout.

Following the three up-three down for the Dragons, the Bulldogs almost suffered a similar fate in the top of the third. One batter managed to reach first on an infield hit, but Bishop got out of the inning with no further damage.

The next five half innings had similar results for both teams, with just one batter reaching base for Buena.

Foothill Tech’s bats finally awoke in the bottom of the fifth, which was led by a single down the third base line for Evan Conant ‘23. Austin Watkins followed by reaching base on an error from the Buena third baseman. Xander Belchere ‘22 then popped into right field, but it was dropped by the Bulldogs who were then able to throw out a tagging Conant at third base.

Following a strikeout for the second out of the inning, Spencer Major ‘21 was hit by a pitch to load the bases for Beltowski. During Beltowski’s at-bat, the Bulldogs catcher attempted to back-pick Major at first base and threw a wild ball, allowing Watkins to steal his way home from third. Beltowski then flew out, putting the Dragons behind 2-1 going into the sixth inning.

After giving up their first run of the game, the Bulldogs were motivated to stretch their lead as much as possible, and they were able to do so with a double into leftfield that was followed by a single into right field. Right fielder Parker Graham laid out for the ball, but it barely squeaked under his glove to put Buena up 3-1 before Bishop struck out a batter for the third out.

The bottom of the sixth and top of the seventh were once again dominated by both pitchers, with only one baserunner for each team.

The Dragons had one last chance to save their season in the bottom of the seventh, and Simeon Rodriguez ‘22 gave them hope when he led off the inning by reaching first base on an error from the Buena shortstop. The next two batters were outs for the Dragons, but Spencer continued the inning by reaching first and advancing Rodriguez on a groundout. The final at-bat for the Dragons season resulted in a flyout, giving Buena a 3-1 win.

The Dragons were emotional after the loss, but Major was grateful for the chance to play this season, saying, “[this season] meant everything man, we had our best shot at CIF last year, but it got cut off and it was really a bummer, but now we got out here and got a second chance, it was phenomenal, it was awesome.”