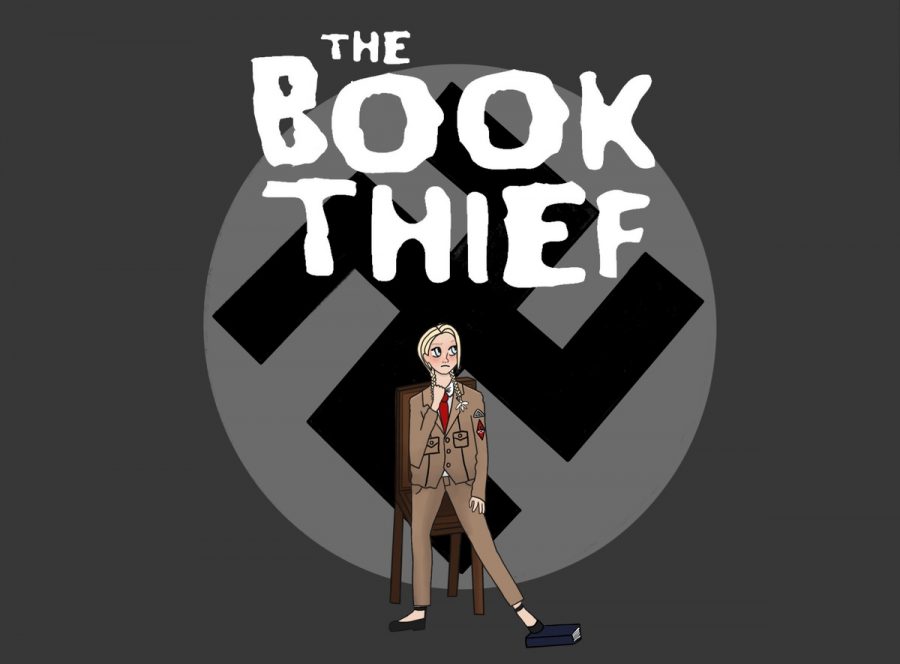 One critic for the Boston Review called the movie adaptation of The Book Thief, "the Walt Disney version of the Holocaust from the German point of view.

Every year during the joint Holocaust unit in English and history, the sophomore class at Foothill Technology High School reads The Book Thief  by Markus Zusak. The fictional account of Nazi Germany follows Liesel Meminger, a loveable German tween, as she adapts to life with her foster parents Rosa and Hans Hubermann.

Narrated by an equally sarcastic and sacrilegious personification of Death, The Book Thief weaves an idyllic tale of benevolent Germans and well-meaning Nazis, book burnings and a rebellious girl on her journey from illiteracy to authorship when she writes her own book, also titled The Book Thief, at fourteen.

Published in 2006, The Book Thief curiously has received virtually no criticism. Praise for the novel seeps from every vestibule of the literary community. Readers practically worship Markus Zusak as if writing a Holocaust novel is an altruistic act.

Joining the legion of authors who turned the Holocaust into literature is an honorable pursuit, but not what Zusak did—or even intended to do. The Book Thief is a childish story about German civilians during the Third Reich confused into Holocaust novel.

The Book Thief was originally marketed to adults in Australia and then rebranded as “Young Adult” for American audiences. As it became more successful, The Book Thief was shoved into the foreboding Holocaust genre. It was there that the novel became truly special because it is much easier to digest than all the raw narratives that populate the genre.

The Book Thief is essentially judenfrei, except for Max Vandenburg, Liesel’s Jewish friend hiding in the Hubberman’s basement. Max, 22, is advertised as the “Jewish fist-fighter.”   Zusak shies away from inventing Max as an actual ghetto fighter or a competent fighter for that matter, instead creating an ironic “like a sheep to slaughter” stereotype: the Jewish fist-fighter who can’t fight.

Zusak’s feeble swing at the Jewish condition is laughable. In one scene, Max shadow boxes Hitler and loses. No self-respecting Jewish man has ever shadow boxed Hitler. The scene reads like “Enemies to Lovers” Wattpad fanfiction. During the fantasy fight, Max keeps getting hit because he is distracted by Hitler’s “deliciously brown eyes.”

The second strike against The Book Thief is Death’s personality. He is arrogant and his alleged charm feels forced. The book opens as Death says, “first up is something white. Of the blinding kind.” He continues on to invent an argument with the reader over whether or not white is a color.

Zusak made a plethora of creative choices for the novel. What he created was a stylistic nightmare. The Book Thief is a crime against rhetoric. Throughout The Book Thief, Zusak abuses every rhetorical device available. His imagery is hapless, he writes in short phrases and excessive line breaks in a pseudo-poetic fashion. He repeats words and phrases constantly in a way that most authors would only do at the end of a dramatic chapter.

His word choice is just as artificial as his Holocaust. He uses “due to the fact” and “as percentages may suggest ” multiple times throughout the novel and Death speaks in tongues while trying to convey simple sentiments to the reader. Additionally, his use of allegory is impotent.

Liesel is no Greek tragedy, but Zusak almost goes out of his way to destroy any emotional impact the story could deliver. He spoils every twist with his willfully pedestrian foreshadowing.

Thus, The Book Thief is what it is. It is popular because it is easy to read. Because Zusak’s fantasy Germany, his gentile Anne Frank, soothes German guilt. It could be valuable for younger readers, more amicable to the eighth-grade tolerance curriculum. But for older readers—anyone past Bar Mitzvah age really—the Book Thief is a grand waste of time.

To me, you miserable mortals, The Book Thief will always be the color of Barney.

Of the dinosaur variation.

Due to the fact that it’s an entire book of purple prose.