The return of live Air Guitar 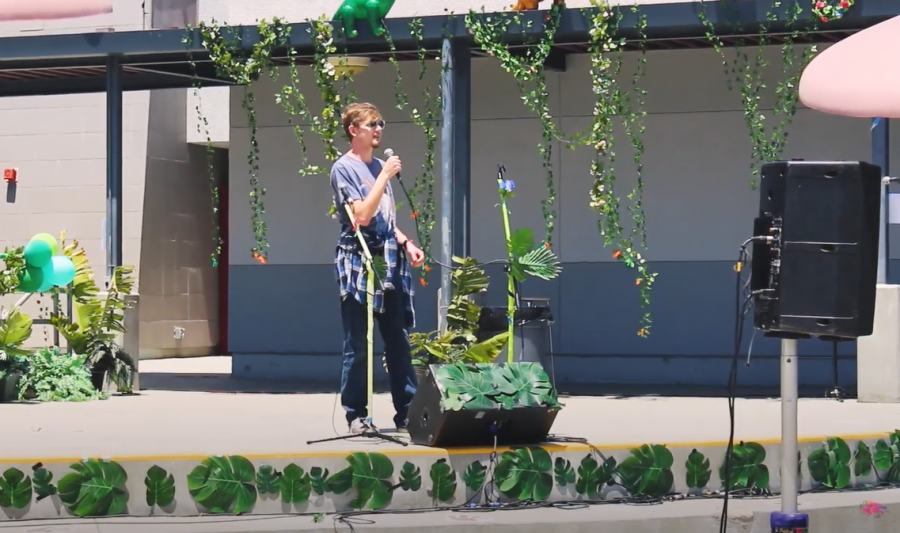 Andrew Johnson '21 confidently declares his rendition of the Announcer's Test.

With the buzzing atmosphere of a unique prehistoric jungle theme, Air Guitar 2021 commenced on May 21. The stage was set with a multitude of fake trees and dinosaurs. The much hyped event took place in the quad of Foothill Technology High School (Foothill Tech) and started off with a bang as Zen Li ‘21 and Tristan Arana ‘21 performed a rendition of, “Your Song,” by Elton John to which the crowd reacted with positive approval.

The intermissions between performances were various awards and recognitions for the senior class. The first being, recognition for 1st generation college students. An intermission recognizing 125 to 175 along with 176 to 224 hours of community service followed this. ASB then awarded students who had 225-400 hours of community service. Next up was recognition for seniors who maintained a 3.0 GPA for quarters 1-3. NHS handed out the last awards of the day to students who were in the society.

Elizabeth Ferris ‘21 and her father, the Foothill Tech girls’ basketball coach Chuck Ferris, performed a vocal and guitar rendition of his original song “Crawl”. An exhilarated crowd reacted well to this performance by showcasing a thunderous round of applause.

In response to his thoughts on Air Guitar, Drew Brunsky ‘22 stated that, “Air Guitar is a great event which allows us to relax and enjoy the cool performances that occur.” Unfortunately due to the COVID-19 pandemic, Air Guitar 2020 was held virtually, and Foothill missed out on a live performance of one of the biggest events of the year.

Akshay Shanbhag ‘21 agreed with Brunsky’s sentiment and added that, “it was nice to experience air guitar after not having witnessed it in person last year.”

Andrew Johnson ‘21 stirred the audience by reciting The Announcers Test which involved memorization, repetition, enunciation and the use of every letter in the alphabet multiple times, to which an excited crowd screamed in approval. This was followed by a vocal performance of, “Science,” from Lily Toreja ‘24 to which a supporting crowd attempted to start a wave.

Naomi Devine ‘21 performed “Battlefield” in which the music was roaring, and the crowd viewed in awe of a ballet-like performance. Charisse Lindsey ‘22 sang “Glitter In the Air” by Pink, a performance crowd reacted to encouragingly, which happened to be the last student performance of the day.

The annual event was appropriately closed out by the teachers of Foothill Tech singing a parody of “Hello From The Other Side” by Adele which had a zoom spin on it and effectively summarized the difficulties of the online school year. The performers all got stuffed animals to celebrate their performances at the end of the talent show. Johnson was declared winner of Air Guitar for his rendition The Announcers Test. The crowd reacted well to all of the performances, and many students echoed their joy for having witnessed Air Guitar in person, after not being able to see it live last year.