The Foothill Dragon Press • May 26, 2021 • https://foothilldragonpress.org/273912/a-latest/tough-loss-for-boys-basketball-in-second-to-last-league-game/ 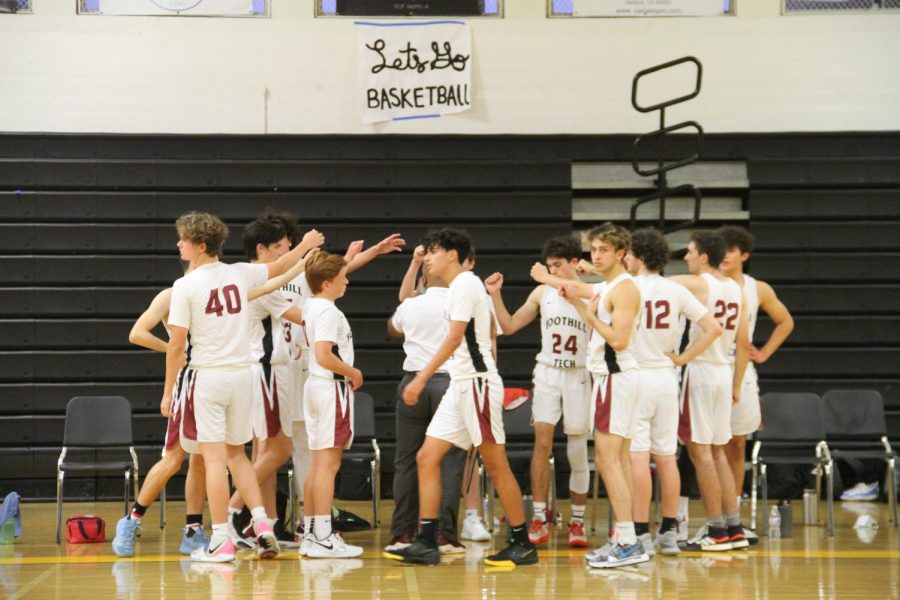 The boys' basketball team rallies together in one of their last few season huddles.

On the evening of May 17, the Foothill Technology High School (Foothill Tech) Dragons played the Bishop Diego High School Cardinals in their second to last league game at their home court of Ventura High School. With family members from both the Cardinals and the Dragons, the crowd was loud and ready to watch some basketball.

Stepping on the court for the Dragons was Kai Wilkes ‘22, Brian Holloway ‘21, Justin Razo ‘21, Cooper Mecham ‘21 and Sam Noah ‘23. The Cardinals won the tip and were the first ones to put points up on the board for their team. They kept their energy up by playing intense defense on the Dragons, and by causing them to have several turnovers within the first couple possessions. Along with the intense defense, the Cardinals were getting several second-attempt shots with their offensive rebounds.

Even Conant ‘23 changed the tide by making the first shot for the Dragons. The Dragons used their defensive momentum to fuel their offense, helping break the Cardinal’s press with ease. With several easy layups by the Cardinals and with the Dragons trailing, they did their best to keep their energy up. Holloway proved these efforts with  a rebound and by making  a fade away shot  in front of the free throw line.

With high intensity, the Dragons started to scramble out of control, causing fouls and sloppy passes. To cool the Dragons down, Coach Jamaal Brown called the first timeout of the game.

Coming out of the timeout, David McCarthy ‘22 drew an on-the-ground foul for the Dragons, giving Razo a shot attempt that nearly missed. Playing off of Razo’s attempt, Joseph Poteracke ‘22 gets a put-back layup, giving the Dragons two more points. With the Dragons trailing behind, Mecham attacked the basket and scored another layup for the Dragons. Despite their efforts,  the first quarter ended with the Dragons down 19-11.

With the start of the second quarter, the Cardinals wasted no time to increase their score furthermore. With aggressive defense by the Cardinals, Mecham drew a foul that sent him to the freethrow line, making the first but missing the second. But with the high intensity defense, the Cardinals were able to strip it away from the Dragons and get a fast break layup.

To add to the scoreboard for the Dragons, Holloway, Razo and Noah contributed  their fair share of points.

After numerous attempts to establish their lead, the shots by the Dragons all failed to go in. By the end of the second quarter, the Dragons still trailed 40-23.

As half time closed and the third quarter set into motion, the Cardinals began with possession of the ball. Razo went up for the rebound and secured it for the Dragons after the Cardinal’s missed their shot attempt. After several minutes of no shot attempts from the Dragons, Aden Robles ‘22 gave a dish pass to Poteracke giving the Dragons two points.

Luke Wells ‘23 drained a three-pointer, giving the Dragons the momentum they were lacking in the third quarter. Robles attacked the rim while drawing a foul, sending him to the line and making both of his free throws.

With the back and forth shots and layups by both teams, the score was 59-35 by the end of the third quarter, in favor of the Cardinals.

The fourth and final quarter rolled around and the Cardinals started with the ball once again. Holloway was the first to score with an off the dribble spin move shot near the basket. Following the shot, Mecham made a three-pointer for the Dragons, along with hustling on defense and playing aggressive. McCarthy and Wilkes both added to the aggressive defense, causing the Cardinals to have back to back turnovers and giving Wilkes shot opportunities in which he capitalized.

As the clock started to wind down, Owen Houston ‘23 was fouled outside the three-point line, lending the opportunity to shoot three free throws. He made one out of the three, finishing the game with a total of 51 points for the Dragons against the 68 points made by the Bishop Diego Cardinals.

For the next game the Dragons play them, Coach Brown states, “I’d like to have a little bit better effort, like our second half that we had, for the entire game. If we can put together 32 minutes of basketball instead of just having a really good second half… I think we’ll be in a lot better shape.” The Dragons played the Cardinals again in the final game of the season on Friday, May 21 at the Cardinal’s home gym and lost 77-44.