The Foothill Dragon Press • May 21, 2021 • https://foothilldragonpress.org/273896/a-latest/girls-basketball-fights-back-against-st-bonaventure-but-suffers-a-44-38-overtime-loss/ 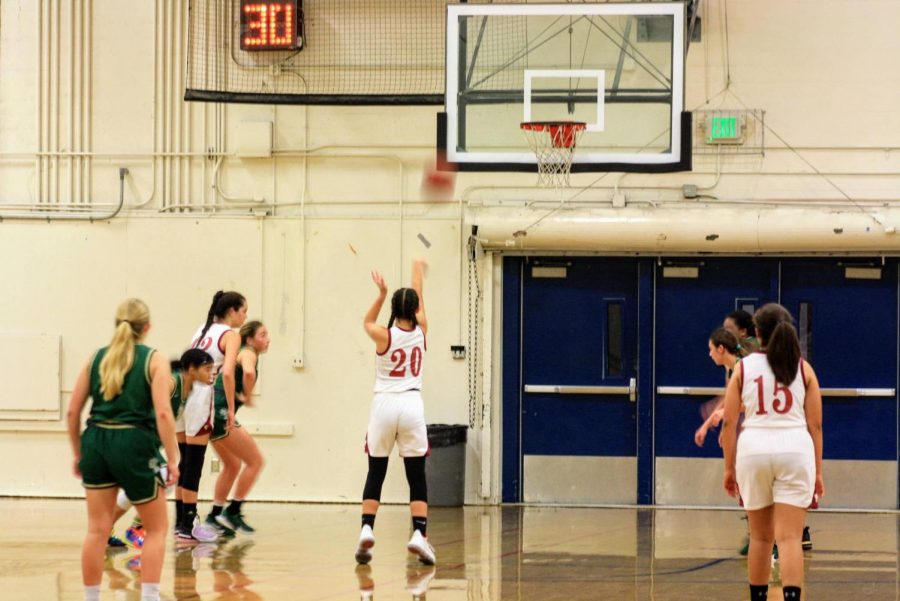 The Dragons started the game off quickly, with a steal and layup from starting guard Ashlyn Gomez ‘22.

The rest of the first quarter highlighted the other two starting sophomore guards for Foothill Tech, Olivia Huynh and Esmi Cesarez. Cesarez hit a mid range jumper and contributed a steal, while Huynh hit a three-pointer and pick-pocketed the Seraphs for a fast break layup.

Despite their efforts, the Dragons struggled to stop the Seraphs inside game, giving up five layups to finish the quarter down 10-9.

In the start of the second quarter, the Dragons showed their hustle and rebounding prowess when starting center Rome Falcocchia ‘22 gathered an offensive rebound and was fouled on the putback. After swishing the first free throw, the second resulted in a miss. Chloe Scofield ‘22 grabbed the rebound from Falcocchia’s shot and racked up another one off of a miss from Cesarez in the same possession.

An elbow jump shot from forward Shaun Taylor ‘22 was matched by yet another layup from the Seraphs, but Falcocchia neatly found Huynh for a cutting layup to give the Dragons a 14-12 lead.

Falcocchia continued her success with an and-one layup off of a Dragon inbound play, but she was unable to convert the three-point play.

The first half ended with one free throw from Emma Bartlett ‘22 and a short corner shot from the Seraphs to give them a 19-17 lead.

The third quarter was an all-around clinic from the Seraphs, quickly hitting two baseline shots and two layups to give them a 27-18 lead.

Turnovers and missed shots from the Dragons contributed to the Seraph onslaught, and missed free throws held the Dragons to just one point in the third, making it 30-18 going into the fourth.

Despite their struggles, the Dragons came out firing in the fourth quarter and began to claw their way back.

After the two teams exchanged free throws, the Dragons made their run. Falcocchia converted an and-one layup, and Scofield and Cesarez both followed with two free throws of their own.

The continuous foul opportunities had the Seraph head coach livid, and his animated frustration drew ire from the Foothill Tech crowd about his complaints.

Despite his frustration, the Dragons kept drawing fouls, with Huynh, Elizabeth Ferris ‘21 and Cesarez capitalizing three times on free throws. The Dragon front-court game showed their grit when Scofield got three consecutive offensive rebounds before finally getting it to Falcocchia for the game tying layup with two minutes left.

After a Seraph floater, Scofield made a layup of her own to tie it up again at 35-35. The gym was buzzing from the immense comeback, and a scramble for the ball with 30 seconds left only heightened the intensity.

The Dragons took possession with 20 seconds left and had a chance to win, but Huynh turned it over with 14 seconds left. The Seraphs pushed the ball up the floor and shot a quick three-pointer, but the Dragons collected the rebound and threw it up the court. With just five seconds left, Scofield was unable to get a shot up and the game was forced into overtime.

To start the four minute overtime period, Falcocchia won the tip-off and got it up to Ferris who hit a mid range jump shot to give the Dragons their first lead since the first half.

Although it looked like the Dragons could run away with the game, it was the Seraphs who got hot to seal it up. A series of two free throws, a three-pointer and two more free throws put the Seraphs ahead 42-37 with just over a minute left.

Cesarez attempted to put the Dragon’s back into the game with a free throw, but St. Bonaventure hit two more free throws to end the game.

When asked about the comeback, Ferris said, “we really showed some confidence today at the end there, we were lacking it in the beginning and I think that we just came together.”

Falcocchia echoed similar sentiment, saying, “we had a pretty good timeout that brought up our energy, and getting some loose balls and turnovers really changed our energy, but unfortunately we should’ve been playing like that the whole time.”

Huynh says to prevent deficits similar to this one, the Dragons need to, “practice our transition offense more and just have more control of the ball and not force passes.”

The team lost their last league game against Santa Clara on May 18, giving them a league record of 1-3.