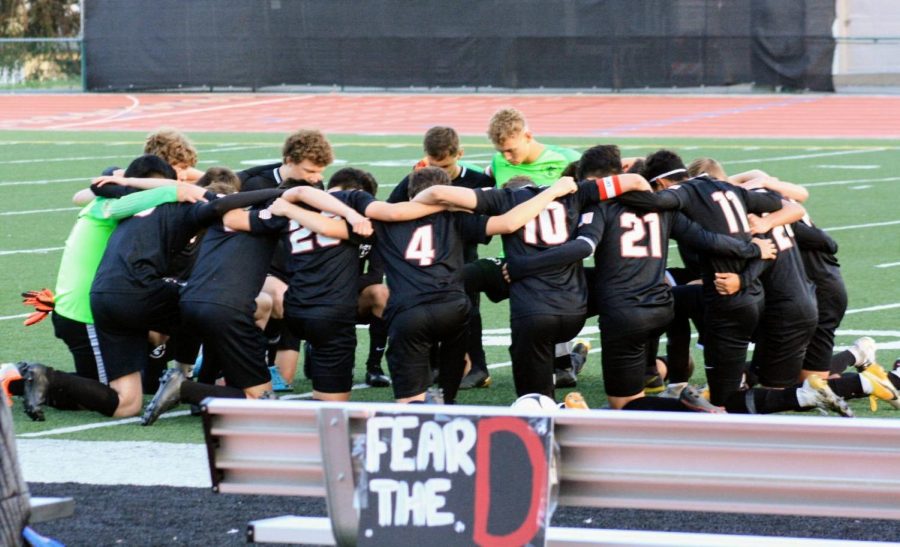 Varsity boys huddle up as they prepare to defeat their rivals.

When asked about the ceremonies, Shadden said, “it was pretty emotional, […] hearing the parents talk about their kids and the love in the stadium, it was special.”

Noah voiced similar sentiment, saying, “it was great, they did a great job with the ceremony, it’s bittersweet of course, it’s been a great 4 years here and it’s coming to a close.”

The game had a late start but the players wasted no time, with the Dragons getting an early opportunity just two minutes into the game that was narrowly cleared by St.

Eight minutes later, Diego Ocampo ‘22 made a move and crossed it in to Kraut, who’s clear shot at the goal was quickly cleared by St. Bonaventure.

However, the Dragons would make up for it when Aaron Smith ‘22 got the ball in the middle of the box and poked it over to Hernandez, who glanced his shot off the goalkeeper into the net. This gave the Dragons a 1-0 lead at the 25 minute mark.

Immediately following the goal, St. Bonaventure had their first offensive opportunity when they dribbled right past the Dragons down the right sideline, but their shot went wide left.

Hernandez didn’t slow down, getting two more shots shortly after his first goal, but the first was saved and the second went wide.

The Dragons drew a foul near the St. Bonaventure goal and the ensuing free kick from Hernandez was punched out by the goalkeeper.

Foothill Tech almost took a 2-0 lead when Hernandez’s shot with 15 minutes remaining went left, and Ocampo’s follow was deflected out.

More offensive opportunities came from Eris when he made a long pass up to Ocampo who gave it to Andre Anders ‘22. The ball was cleared by St. Bonaventure, but Eris almost created another goal when he saved the ball off the endline, but his cross was deflected wide left.

The Dragons’ offensive onslaught continued when Ocampo drew a yellow card just outside the box, but his free kick bounced off the St. Bonaventure wall out of bounds.

Just a couple of minutes later, forward Bryson Blevins ‘22 had two shots at headers, but the first cross from Anders was just out of reach and the second cross from Eris led to the Blevins header being saved by the goalkeeper. Despite all of these missed chances, the Dragons finally capitalized when Ocampo split two defenders with a feed to Smith, who poked it just past the Bonaventure goalie to give the Dragons a 2-0 lead at the end of the half.

Foothill Tech’s first shot of the second half came five minutes in with a corner kick, but Noah’s header went over the goal.

Following Shadden’s goal, Anders took the ball down the right sideline and expertly chipped a shot over the Seraphs’ goalkeeper into the left corner of the goal to increase their advantage to 4-0.

St. Bonaventure finally got a shot to get on the scoreboard at the 31 minute mark when they received a freekick right outside the Foothill Tech box, but the kick was saved by Shadden.

At the 27 minute mark, the backup goalkeeper Arroyo subbed into the game for Shadden, who received a rousing round of applause from the crowd. Arroyo didn’t get much immediate action due to the Dragons’ ability to keep the ball in the upper half of the field. Blevins got another good opportunity to score when he got past the goalkeeper, but his shot on the empty net was deflected out of bounds.

Shortly after, Hernandez received a through ball and pushed it into the right side of the goal, just out of reach of the Bonaventure goalkeeper for his second goal and to make the lead 5-0.

The Seraphs began to try and mount a comeback soon after, with a cross that was nearly finished before it was cleared out by Ethan Diaz ‘22.

With five minutes left in the game, Arroyo made two great plays with a save on a long shot from the Seraphs, and then made a miraculous play by charging a wide-open Seraph forward and deflecting his shot away from the goal. The senior’s save provoked animated cheers from the crowd.

One of the final plays of the game ensured a noteworthy highlight, when starting centerback Noah shot the ball from the 30-yard line and got it just over the St. Bonaventure goalkeeper for an unbelievable goal to make the final score 6-0.

Hernandez spoke about the special night, mentioning that, “freshman year, I remember seeing all the seniors at their senior night and I kind of got emotional, and now actually being a senior this year, it’s crazy to think about how time flies.”

The Dragons are now going into CIF playoffs after finishing second in the Tri-Valley league.