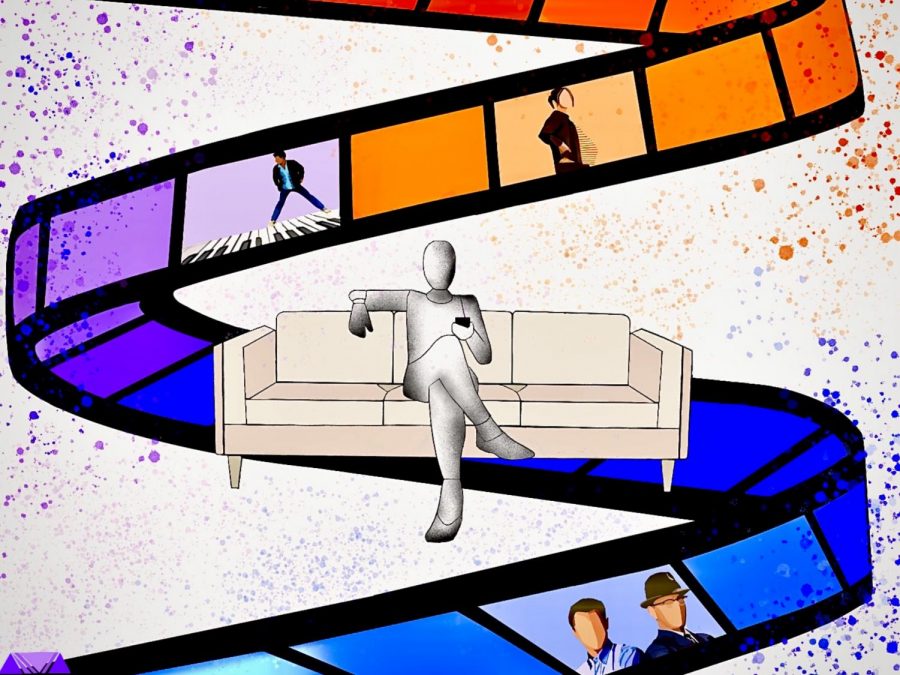 Have you taken time to relax recently? Spice up your down time with these quarantine favorites featured by writers Ryann Liddell and Isabella Fortunati that are sure to help you relax to the max.

With summer break starting in nearly a month, Foothill Technology High School (Foothill Tech) students and families can finally relax, do nothing and enjoy some fantastic movies! This list of marvelous and addicting films will set the scene to create the best summer break ever!
Catch Me If You Can
Catch Me If You Can is based on the true story of Frank Abagnale Jr. (Leonardo Dicaprio), a teenage con-artist who managed to steal over 2.5 million dollars from a bank before he turned 18. After running away from home at the young age of 16, Frank learns he can easily forge checks and poses as a pilot for Pan Am air. He travels around the U.S., meanwhile stealing large sums of money from the bank. However, FBI Agent Hanratty (Tom Hanks) soon finds out about this and is determined to put a stop to it. As Hanratty gets closer and closer to arresting him, Frank has to find new ways to escape the debt he has built up, including faking multiple professions and tricking more people. This movie is absolutely incredible to watch as it is filled with a lot of suspense yet it is also quite comedic. Dicaprio and Hanks are amazing, as they capture the characters’ essence perfectly and are able to portray their emotions well. This movie is a must-see for anyone who likes exciting movies.
Can’t Buy Me Love
Ronald Miller (Patrick Dempsey) could not be more invisible at his school. However, when the popular Cindy Mancini (Amanda Peterson) needs $1,000 to fix one of her mother’s dresses, Ronald finds an opportunity to get the popularity he so desires. In exchange for the $1,000, Cindy promises to pretend to be dating him in an attempt to make him well liked, but when Cindy starts to actually develop feelings for him, and Ronald’s friends feel more and more neglected, things start to get rocky. Can’t Buy Me Love is an outstanding movie. It sends really positive messages of self-acceptance and makes you feel good. The actors are outstanding at their roles and the story is really fun. This movie is the perfect movie to watch whenever you feel negative emotions as it leaves you with feelings of internal warmth.
Big
Big is about 12-year-old Josh Baskin (Tom Hanks) who is thrust into the world of adulthood when he makes a reckless wish on an enchanted Zoltar game. With only his friend Billy (Jared Rushton) recognizing him, he has to escape to the city and live his life as an adult, until he can find a way to change back. There, he lands an amazing job testing out toys for kids and falls in love with his coworker, Susan Lawrence (Elizabeth Perkins). However, when his last chance to change back comes to town, he has to decide between living the rest of his life as an adult, or going back to his old life as a child. This movie is extremely fun to watch. It has iconic scenes, such as him dancing on a giant piano with his boss (Robert Loggia). It also has a really good message about how you shouldn’t rush to grow up. All in all, this is the perfect movie to watch with friends or with family.

Marriage Story
Marriage Story is a beautifully depressing movie about a divorce between Charlie Barber (Adam Driver) and Nicole Barber (Scarlett Johansson). They both worked on plays together and had one son named Henry (Azhy Robertson). This film displays how divisive divorces can be, even when the two people are civil. The journey between lawyers, court and where to place the son   makes this film captivating and sorrowful. The director (Noah Baumbach) mysteriously makes you want both parties to get what they want, and there is no actual antagonist present. Marriage Story alludes to the journey of co-parenting and remaining in a healthy relationship through a divorce.
Juno
Juno is a very heartfelt film about a teenager’s crazy life. Juno MacGuff (Elliot Page) is a teenager who becomes pregnant in her junior year of high school. Juno decides to find a family that can adopt her baby when they’re born. She finds a couple who are Mark Loring (Jason Bateman), a failed rockstar, and his wife named Vanessa Loring (Jennifer Garner). While going through the adoption process, Juno still has to go through regular teenage life while being pregnant. Juno is a very hysterical film that still has an emotional side to it.
Little Women
Little Women is based on Louisa May Alcott’s well-known novel “Little Women”. There are many versions of the Little Women film, but the 2019 interpretation of Little Women is what we will be referring to. Little Women is set during the Civil War and depicts an American family with four daughters that live in Massachusetts. The daughters are Jo (Saoirse Ronan), Meg (Emma Watson), Beth (Eliza Scanlen) and Amy (Florence Pugh). The movie also features one of their friends, Theodore Laurence (Timothée Chalamet), known affectionately as “Laurie” throughout the film. Little Women is a bittersweet film that will make you feel a mixture of emotions. The setting is beautiful and the acting is phenomenal. You find yourself laughing and crying with the characters.

Summer break offers up a lot of free time, but sometimes the best thing to do is just sit down and enjoy a movie. So grab a snack, sit down and watch one of these amazing movies.