Turning off Zoom and walking into class 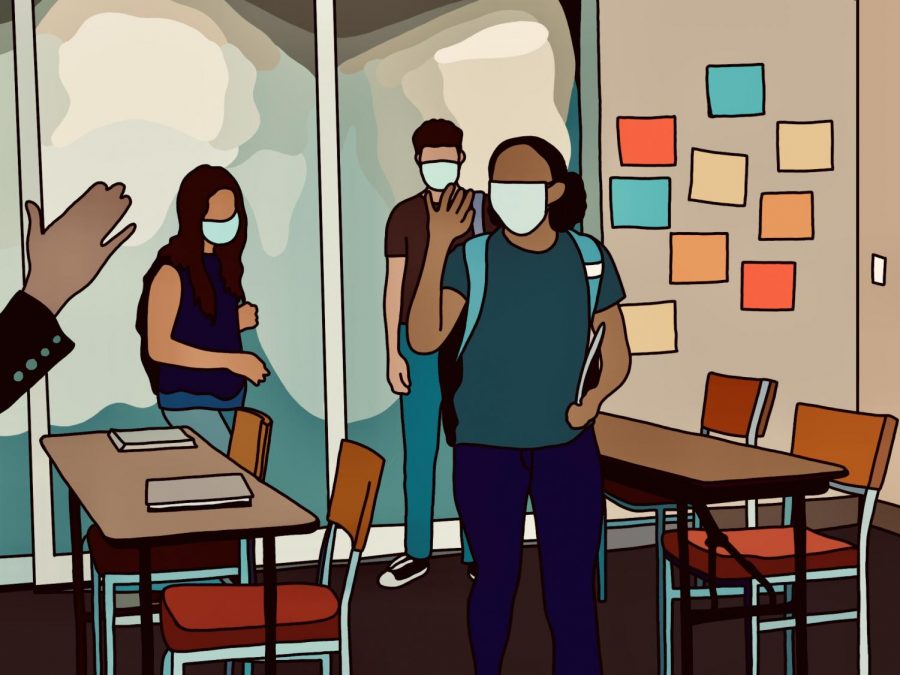 After more than a year of completely online schooling, students must now adjust to the new hybrid format, which will come with a new set of advantages and disadvantages for all students.

The return to Foothill Technology High School’s (Foothill Tech) campus has been highly anticipated by students as the year has progressed with an entirely online model. Distance learning took some time to figure out and adjust to, and it seems that students and staff are in for a challenge once again with the hybrid school model proposed by the Ventura Unified School District. With only two months left of the 2020-2021 school year, how will the hybrid model look to students and how are students in the A, B and C groups dealing with the transition?

After the two weeks of Phase One, the projected model would have students in the A and B groups back on campus full time, while group C remains online.

Students in each group are bound to have different experiences with this sudden change in learning. “I wanted to go back to school so I could get closure and finish out my senior year with some sense of normalcy,” says Brooke Secreto ‘21.

Acacia Crouch ‘22 adds, “I chose to go to in-person school because it helps my mental health by seeing people who I haven’t really seen in a very long time. It will be a big help to keep me focused.”

Tessa Shinden ‘24 explains that she chose to return to campus “mainly for the reason of socialization,” noting how, “it’s hard to meet new people when everyone is a black screen.”

For students in the C learning group, concerns about health are a major factor in determining their return to school. “I stayed online because my younger brother is high risk,” Andrew Ibarra ‘23 explains.

The sudden changes in the school year have been difficult for students to maneuver. Now, with even more changes being made to the schedule, students wonder if the confusion surrounding school this year will continue. Shinden states that she “found it to be confusing that they decided to change the schedule so suddenly on everyone, even though there was a solid plan that made sense.”

“The uncertainty of everything is what’s been so challenging for me,” Secreto adds. “There seems [to be] a huge lack of communication between the district, the admin, the teachers, students and their families.” She mentions how, with state COVID-19 guidelines constantly changing, “it leads to a lot of stress and confusion for everyone involved.”

Students also wonder whether becoming accustomed to hybrid learning will pose a challenge for them or an improvement. “I feel like things will be tricky for a few weeks to a month,” says Crouch. “I’m hoping that they have come up with an official plan and stick to it.”

Shinden continues with a bright outlook on hybrid learning, hoping that no major issues will arise. “Maybe small problems such as familiarity with subjects and distractions of others will come into play, but I think it depends on the individual student,” she explains.

“It’ll definitely be an adjustment,” Secreto states. “I’m confident that my teachers are going to do everything in their power to make this as easy of a transition as possible.”

Secreto hopes that hybrid learning will be a positive outcome of the past year’s difficult situation. “I am really looking forward to being taught in person, it’s something that I’ve really missed because Zoom classes aren’t the best for me,” she says. Ibarra adds, “It will be good for those people to be able to regain some normality in their lives.”

For students in group C who will remain online full time, “I feel like it is going to be difficult and upsetting,” says Crouch. “I feel like it will be harder to understand the lesson given in person when at home, due to the teacher constantly moving around and other conflicts.”

“Those people still on Zoom are not going to be getting the same sort of attention as those in person,” Ibarra agrees.

Another aspect of the hybrid school model is the removal of Social Emotional Learning (SEL) on Wednesdays, which will be replaced by another full school day. Arguments in favor of and against SEL have been voiced throughout the year, and the debate over whether or not the day is necessary has been uncovered again due to the new model.

“I absolutely love SEL and the fact that they are taking it away makes me pretty upset,” says Crouch. “I get a mental and physical break from Zoom and school, it’s really nice having that break in the middle of the week.” Shinden agrees, saying, “it made me feel far more confident in how I was handling school so I did not have to worry about it as much on the weekends.”

“I work Wednesday mornings so I felt pretty sad when I heard that rumor,” Secreto says, adding that, “going back to school five days a week with 80 minute classes is a huge jump from what we’ve been doing the last year. A lot of my friends freaked out when they heard that was a possibility.”

With juggling classwork, jobs, sports and other extracurricular activities, healthy sleep schedules, meals and balancing commitments with downtime all in the midst of a global pandemic, many wonder if returning to campus full time is a viable choice for a number of students. Not only would their time and schedules be even further compromised, but they would risk exposure to COVID-19 as well as the possibility of infecting their families and colleagues. However, the return to campus could also allow students to interact with their peers, as well as receive direct help from their teachers and a partial restoration of their normal lives that they’ve missed for the past year.

On the topic of returning to campus full time, “I don’t think it’s a good idea,” says Secreto. “From a student mental health point of view, it’s too sudden of an advancement. It’s honestly stressing me out just thinking about it.” She finishes by noting, “We’ve been sitting in our bedrooms learning on screens for the last year.”

Crouch agrees by saying, “I don’t think it’s a good idea whatsoever, I think that it’s going to be hard on students’ mental health and the teachers, and it’s just not smart because they are jumping in too quickly. It’s just not a good idea in general.”

Ibarra also agrees that returning to campus full time is “jumping the gun before things have really had a chance to cool off. People keep prematurely going out of quarantine and that is why this has all lasted so long,” he explains. Shinden continues, saying “with the way COVID is going right now, I think it might be a little unwise to return to five days a week so soon.”

Shinden ends on a positive note, saying “complications aside, I want to go back in person just as much as everyone else does.”

In the past year, Foothill Tech students have had to adapt to multiple unfamiliar models of learning, often struggling to stay afloat in the world of online school. The hybrid model will take some getting used to, and issues will certainly arise before the culmination of the school year. However, students will be able to navigate this last quarter just as they’ve done for the previous year, and with patience, hard work and excitement for change, the 2020-2021 school year will end on a better note than last school year.