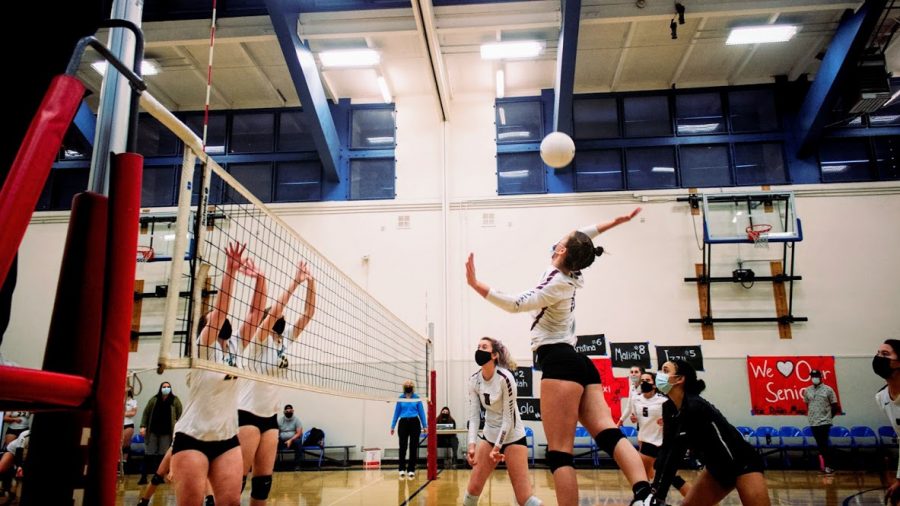 Aubrey Mullin '22 leaps into the air to strike the ball.

Beloved family members filled the socially distanced stands of Cabrillo Middle school on the night of March 18 to cheer on the Foothill Technology High School (Foothill Tech) Dragons in their last home game of the abbreviated season. With the rules and regulations implemented to prevent the spread of COVID-19, the Dragons had their season cut short, which is why this last, and only home game was so meaningful.

Before the game, head coach Kris Gullatt honored the seniors on their last night in the Cabrillo gymnasium as a Dragon. The class of 2021 seniors include Fae Armstrong, Macy Weaver, Averi Carter, Dylan Mullaney and Lexi Donnelly. Coach Gullatt states before the ceremony that the “slightest bit of season is better than no season.”
“We have a really tight bond, and we’re all good with each other and it’s almost sisterly.” – Donnelly states about her fellow senior teammates.
After the ceremony for the seniors, the game rolled around and the crowd of family members does their best to bring life to the gym.

The La Reina Regents start the game off with a powerful serve. The Dragons do a great job of controlling the ball and Mullaney attacks, leaving La Reina unresponsive and allowing the Dragons to take the first point of the game. A back and forth of expert kills and missed opportunities keeps both teams fairly matched and the Dragons push a small lead of 13-9. An attack from Carter pushed the Regents to call the first timeout of the game.

Coming out of the team huddle, immediately the Regents hit the ball over to the Dragons but it was too hard to put back up, giving the Regents hope that they could keep up with the Dragons. Unfortunately for La Reina, the Dragons kept their lead which ultimately led to winning the first match 25-19.

To begin the second match, the Dragons start with the ball. Even with a powerful serve the Regents do a good job of controlling the ball and hitting it back over to the Dragons. The kills Carter supplies are too much for the Regents to take, causing the Dragons to take the first point of match two. With the quick lead and power hits from the Dragons, the Regents call timeout after Maliah Juker ‘22 delivers a hard spike.

Coming right out of the timeout the Dragons wasted no time to put more numbers on the board with Mullaney reading the defense of the Regents and tipping the ball over the net. Shortly after Mullaney’s point, Weaver and Juker add several spikes for the Dragons which makes the Regents call for another timeout.

By this time, the score is 17-3 and the Dragons continue to keep their streak alive by Weaver blocking another hit from the Regents. Adding to the score, Isabella Rodriguez ‘23 sets up her teammate Juker and she taps it over the net for a beautiful play. With the second match close to ending, Kristina Effner ‘22 had two back-to-back serves that the Regents could not control. The final score of the second match was 25-8.

With the final match underway, the Regents serve and gain the first point of the game. It’s a back and forth battle until the Regents get five back-to-back points, but this still isn’t enough for them to win the third match against the Dragons. Mullaney once again reads the defense and spikes the ball to the right where the Regents defense was too slow to get to.

A great win for the Dragons especially considering this was  their only home game of the season and according to Coach Gullat the Dragons, “basically having no practices, and beating Bonnie last night was really good.”