Girls’ volleyball takes a loss in a bittersweet return debut 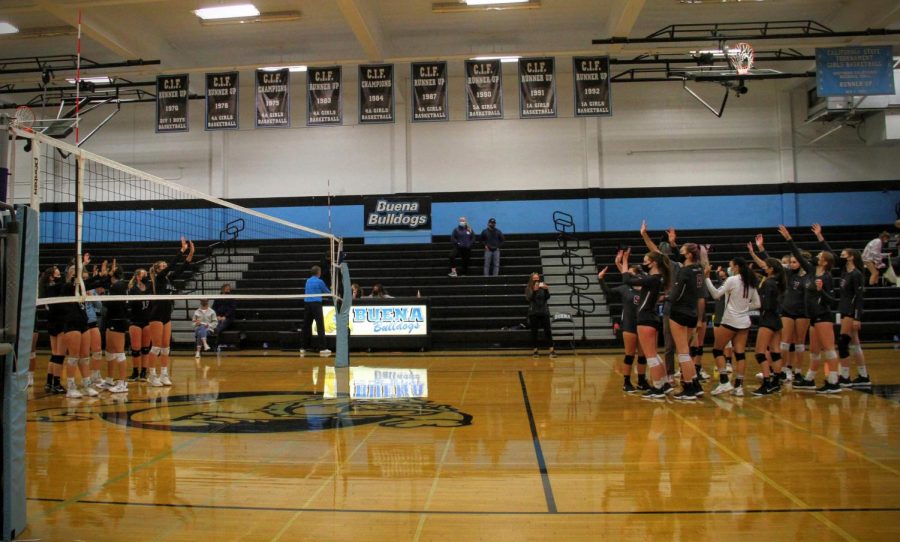 Due to COVID-19, sportsman-like conduct has evolved as the Dragons cannot exchange high-fives anymore at the start or end of a match.

March 15, 2021 marked the first game back after the year-long hiatus for Foothill Tech Dragon athletics, and the varsity girls’ volleyball team was eager to play. The sparse crowd that was scattered throughout the Buena High School gymnasium channeled the enthusiasm of a fully packed stadium as Dragons and Bulldogs began the first match. “It’s been a whirlwind to get everything ready and prepped to go. So, I’m just happy the girls get to play” says head coach Kris Gullatt.

The Dragons, excited to be back, started out strong with a serve from starter Lola Tennison ‘24  that ended in an out of bound hit by Buena, awarding the Dragons the first point of the game.

Foothill Tech quickly sustained a strong lead in the beginning of the match. The Bulldogs fought back with determination and began to tail the Dragons closing the gap to a close score of 12-13, the Dragons still leading in the middle of the match, but in the end their efforts were unsuccessful. Foothill Tech kept their lead and ended the game with a winning ace serve by Tennison and a final score of 25-16.

After winning the first match, things were looking good for the Dragons. The second match began in Foothill Tech’s favor once again with the Dragons building a lead of 8-3, but the momentum was short-lived.

Buena, with newfound determination, gained the next 13 consecutive points pulling ahead 16-8. The Dragons tried to catch up and regain the lead, but the Bulldogs held their ground and finally finished the set off with a kill and took the close win 25-22.

With the matches tied up 1-1, the crowd was buzzing with anticipation and excitement. It was anyone’s game and each team was determined to make it theirs.

The first serve of the third game went to Foothill Tech and Tennison began the match with an ace. Once again the Dragons took an early lead of 8-4, but Buena began to creep up.

As the Bulldogs closed in, Coach Kris Gullatt called a timeout after another ace by the opposition which brought the score to 8-7.

Following the time out, Foothill Tech fumbles the point, giving it to Buena. The Dragons hastily fought to make up for  the setback by scoring the next five points. Once again the Dragons were ahead, holding the lead at a score of 23-20. but it slipped away as fast as they grasped it. The Bulldogs came back, finally tying it with an ace serve.

With the teams neck and neck at 24-24, the suspense was high. Buena was able to win a point with a kill, but gave up the next with an incomplete volley. The Bulldogs were able to triumph with a kill, and finally, an out of bounce hit from Foothill Tech gave away the opportunity to win the match.

The next match would mean victory for Buena and Foothill Tech would have to come out on top to have any shot at winning. With a match score of 2-1, Buena was  fired up and confident, but the Dragons were itching to take back the game. Both teams, aware of what was on the line, were focused.

Unlike the first three matches, Buena gained the early lead. They started out strong with a block, followed by a hit from one of their outside hitters. This head start fueled Buena’s determination. The  Bulldogs held their ground, keeping their score up and shutting down the hopes of the Dragons attempting to catch up. While Foothill Tech did come close with an attack from Avery Carter ‘21 that  nudged the score to 23-21, the Bulldogs pushed through, scoring the winning point with a kill.

While both teams put up a fight, and the game was close, Buena took the final victory at 3-1.

Foothill’s first game back ended in a loss. With the sudden start of the season, there was little time to practice and get ready for this game. “I honestly wasn’t prepared to go back” says Avery Carter,  “we only had two practices before we played, and I think we did well for only two practices.”

Despite the little preparation, the Dragons fought hard and didn’t make it easy for Buena, but in the end the Bulldogs came out victorious. Although they were unable to take the win this time, the Dragons will return, on March 17th at Saint Bonaventure High School against the Seraphs with high hopes.