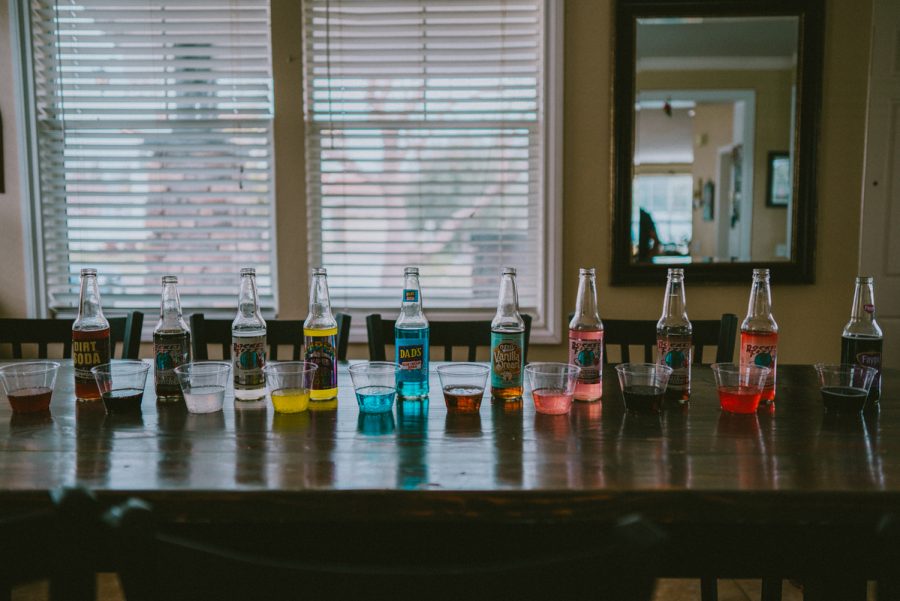 A photo complete with all sodas tried during the test, ranked from what we thought would be the worst (left) to the best (right).

Originating in 2009 from Camarillo, CA, Rocket Fizz has grown to become one of the most well-known soda and candy market(s) in America. With over 91 stores in 29 different states including two locations in Canada, Rocket Fizz is heavily marketable in North America. Rocket Fizz prides itself on its extensive catalog, holding over 4,000 different candies and 500 different sodas. Today we tried out and ranked 10 different flavors of a combination of store exclusive sodas and other popular brands.

Dirt Soda was one of the few sodas that was able to live up to its name. One whiff of the drink smelt of natural dirt, and the taste was no surprise either. It was almost as if we could taste the crunch of soil as we struggled to pour the beverage down the hatch. It appeared that the goal was to make soda with a hint of dirt, but it instead seemed like dirt with a hint of soda. Our consensus was that it was “just really bad, as expected”. (0/10)

Marshmallow soda was the first of many sodas that proved that labels aren’t always accurate. One mouthful of the beverage and we discovered that the taste of marshmallow was nowhere to be found. Instead, we could taste the faint scent of dog water and cheap factory production. In all fairness, the initial test of the drink was not all terrible. However, like many other things, the horrific taste of the soda arrived a few seconds after the first sip. Overall, the mixing of soda and marshmallow is not a wise idea. (1.5/10)

Similar to Marshmallow soda, we felt that pineapples and soda were also a dangerous mixture. To gather an accurate taste of this soda, just imagine the taste of pineapple, and then carbonate it way past the normal point in which something should be carbonated. The sweetness and carbonation of this soda surprisingly ended up being its downfall, because too much of something is usually not a good thing. We all eventually came to the agreement that this soda was simply “not good”. (2/10)

Black Licorice has always had a bad reputation as one of the worst candies in the market, so we made sure to take that information into consideration when reviewing the soda. Despite the horrible aroma, the drink was surprisingly tolerable. It was bad but still tolerable. The flavor seemed to be hidden behind a few coats of carbonation, but at least we were able to identify the black licorice, unlike Marshmallow soda. For supposedly being one of the worst candies available, this soda managed to reach our expectations, even if they were initially very low. (3/10)

At first glance, the cotton candy flavor looked to be appealing, and we entered the taste test with high expectations. However, all it took was one sip of the drink for us to completely change our minds. While the initial taste wasn’t absolutely horrendous, it left a sharp bitter sensation within just a few seconds. The cotton candy flavor tasted too artificial and rotten, and the brutal aftertaste left us in shock. Although there were worse flavors, this soda fell far below our expectations and was ultimately the biggest disappointment on the list. (3.5/10)

While we all agreed that this flavor had potential, it ended up letting us down. The attempt to add the vanilla to root beer was noticed, but we didn’t think it tasted accurate. They tried to differentiate this drink from normal root beer, but they instead created a bland but creamy beverage with a tangy aftertaste. While it wasn’t the worst flavor of the day, the disappointing aftertaste and overall blandness of the drink left us no choice but to rank it below average. (4/10)

This flavor had all of the hype as we pegged it to finish in the top rank. The combination of a great brand (Faygo) and the grape flavor had us eagerly awaiting a sample of the drink. The initial taste was pretty good, and the brand did a great job differentiating the drink from normal grape soda. However, we noted that the drink tasted more like juice than soda, and for that reason we ranked this beverage below some others that deserve greater recognition. (6.5/10)

The Fruit Punch was very flavorful, unlike some of the other disappointing options. It tasted vaguely similar to a Shirley Temple soda, but with more foam and fruit. Similar to a Shirley Temple, the beverage could be compared to Cherry Coke. Overall, this soda was better tasting than most, yet it still was a bit tangy due to the carbonation and syrup mixture. Fruit Punch soda didn’t quite reach our expectations for what it could have been, but that didn’t stop it from being an enjoyable drink. (7/10)

The Blue Cream soda doesn’t have an easily comparable real-world drink or food, but we determined that it could be compared to a better version of the Grape Faygo soda. It was pretty strong and had a crisp, sharp taste. It also wasn’t as carbonated as some of the others which all of us seemed to like better. The Blue Cream soda places higher up on the list being one of the more enjoyable flavors to consume. (8/10)

Vanilla Dream was by far the most enjoyable drink in our selection. It was a good break from much of the garbage we had tasted so far, possibly giving us a bit of a bias towards this one all the way through the end. It tasted similar to what the Root Beer Float soda should’ve tasted like and had a very smooth, creamy and lightly carbonated taste that made it just right. This soda was easily the best option for the number one spot, especially when compared to abominations such as Dirt soda and Marshmallow. (9/10)

Halfway through our testing, it became clear that many sodas from Rocket Fizz are meant for humor rather than leisure, but that didn’t stop us from finding the most flavorful and exceptional sodas on the market. We had a very unique experience overall, and the list truly opened our minds to the expansive selection of sodas found at Rocket Fizz.