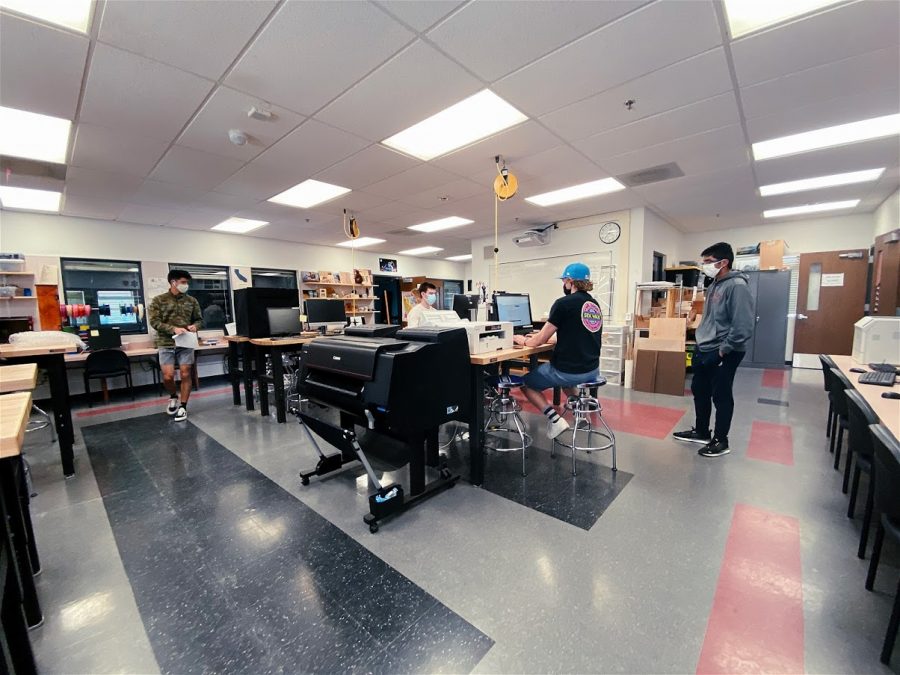 A small pod of students in Foothill Tech's DTech program on campus.

As March approaches marking the one year anniversary of most initial COVID-19 pandemic shutdowns, Ventura County is beginning to see hope for the lifting of some restrictions and reopening many Ventura Unified School District’s (Ventura Unified) elementary and secondary schools.

The end of January 2021 brought a large and deadly surge of COVID-19 cases in most California counties that prompted more restrictions, shutdowns and curfews. However, since the Pfizer, Moderna and Johnson & Johnson SARS-CoV-2 vaccines were approved this past winter, vaccination rates have skyrocketed amongst healthcare workers and those over the age of 65.

In order for schools to reopen for hybrid schedules, the county’s adjusted case rate per 100,000 people must drop below 25 and stay there for five consecutive days. If this number increases anytime during or after the five day period, then schools will be forced to resume fully digital learning.

As of March 4, 2021, Ventura Unified released a statement explaining their intent to fully reopen secondary schools in A and B groups as early as April 12 as Ventura County is projected to enter the orange tier approximately a week before. This contingent date is expected to be achieved as all Ventura Unified teachers and administrators get priority in the next round of vaccinations.

California Gov. Gavin Newsom recently announced and signed an executive law encouraging school districts to open secondary schools by April 1t with the promise of millions in extra funding. Districts will receive funding based on their relative size and any manner of in-person learning qualifies the district for the law.

In the case of Ventura Unified, spring break falls on the week following April 1, making it interesting for districts to attempt to open up for one day and then shut back down the following week. The intent is for schools to host some sort of orientation or check-in on April 1 to guarantee funding without causing confusion.

The superintendent, Dr. Roger Rice, hosted an informational zoom meeting on March 4 outlining the district’s plan for reopening which can be found on the Ventura Unified website or through this link.
Dan Baker, a Foothill Technology High School (Foothill Tech) Bioscience and Chemistry teacher commented, “I think what we have seen is if people are masked in close quarters there is less risk, and I think the benefit of that is very true.”
Baker was attributing to the fact that high schools would be safe for students to return to with proper safety protocols in place such as frequent sanitation and a no-tolerance mask policy. “I think transportation and passing periods will prove to be more of an issue than the safety thing,” Baker ended the interview with.

The major takeaway is this: COVID-19 cases in Ventura County are dropping and the students’ dream of being able to partially return to their past routine could become a reality in the very near future.