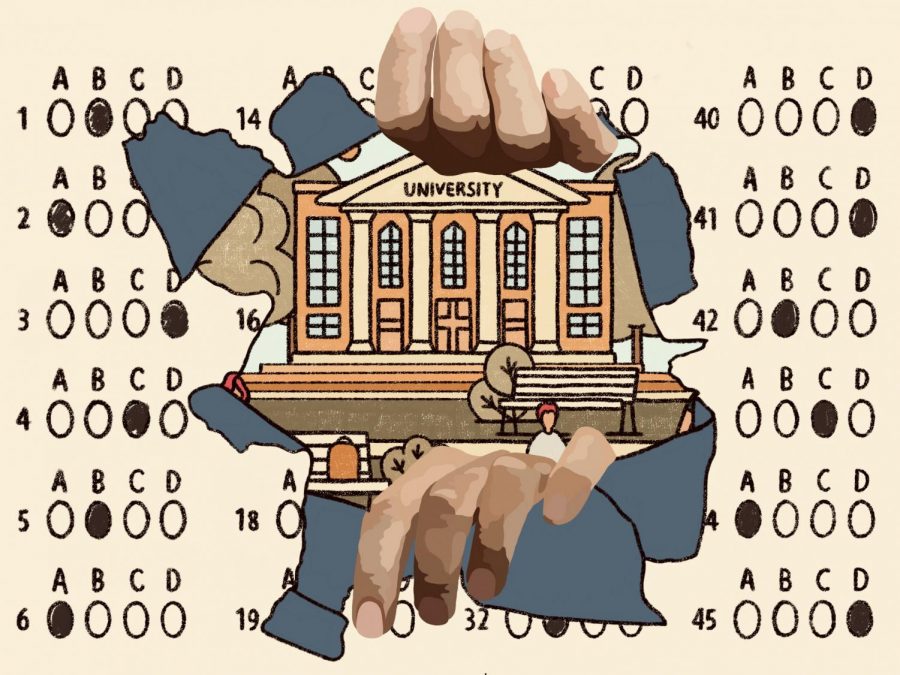 The College Board is bringing about a shift in the world of the SAT-takers by eliminating the optional essay in order to decrease the stress of all college-bound students, which is consequently adjusting how certain universities weigh applicant's SAT scores in their admission's decision, or whether they are even considered at all.

As COVID-19 continues to rapidly spread, students and administrators alike have begun to wonder whether annual standardized tests will take place as they normally do. However, it has recently been announced that many changes have been made to the SAT for Spring 2021 and onwards.

The College Board announced that they have decided to not include the optional essay to try to reduce the demands on hard-pressed students. After trying to create a test applicable for students to complete digitally at home in the spring of 2020, the College Board soon realized they failed and needed to come up with a more efficient plan. They are currently working hard to revise and construct new versions of the test that will work best for students during these uncertain times.

Some universities have also dropped the requirement for students to take the test. Some, including several Ivy Leagues, were waiting to decide whether to require the SAT or not. This decision is controversial as some feel the test is an inadequate marker of a student’s knowledge while others worry that college acceptances may become more selective without the standardized test. It has also been rumored that some universities will create their specialized admission exam in place of the SAT.

Even though many colleges have dropped the SAT/ACT requirement for admission, some individual students would still like the option to be able to take and submit their scores for future use. SAT scores are often used for more than just college admissions as certain scholarships and jobs require that an applicant have a certain minimum score.

Also, some students claim they prefer the SAT to other standardized tests because it doesn’t have a science section, its math concepts focus mostly on algebra and each section has larger time windows than say the ACT.

Nevertheless, the announcement of the changes to the test came as a shock to many juniors and seniors who became some of the first to be excused from the requirement since the College Board started administering it in 1926. Emma Dillion ‘21, who was unable to take the SAT because of COVID-19 concerns, explained, “I was extremely happy [it was canceled] because I think these tests are unnecessary. They ask trick questions, and your score is not an accurate representation of your knowledge”.

Another challenge with the SAT, especially during the COVID-19 pandemic, is the SAT-specific testing sites. College Board sets up certain weekend dates around mid-March where students can sign up to take the SAT at neighboring high schools, but the catch is, students have to find transportation to and from the school. This poses its own issues during regular years, but the COVID-19 pandemic meant that almost all testing sites were shut down, including the one at Buena High School, making it even more difficult for students to be able to take the test.

While the future of standardized testing is still unknown, students in graduating classes ‘22 and lower might be excused from the test altogether and younger students will experience these new changes and possibly new changes for themselves when it comes time for them to consider taking the SAT.