OPINION: Blurring the lines of gender norms – femininity within masculinity 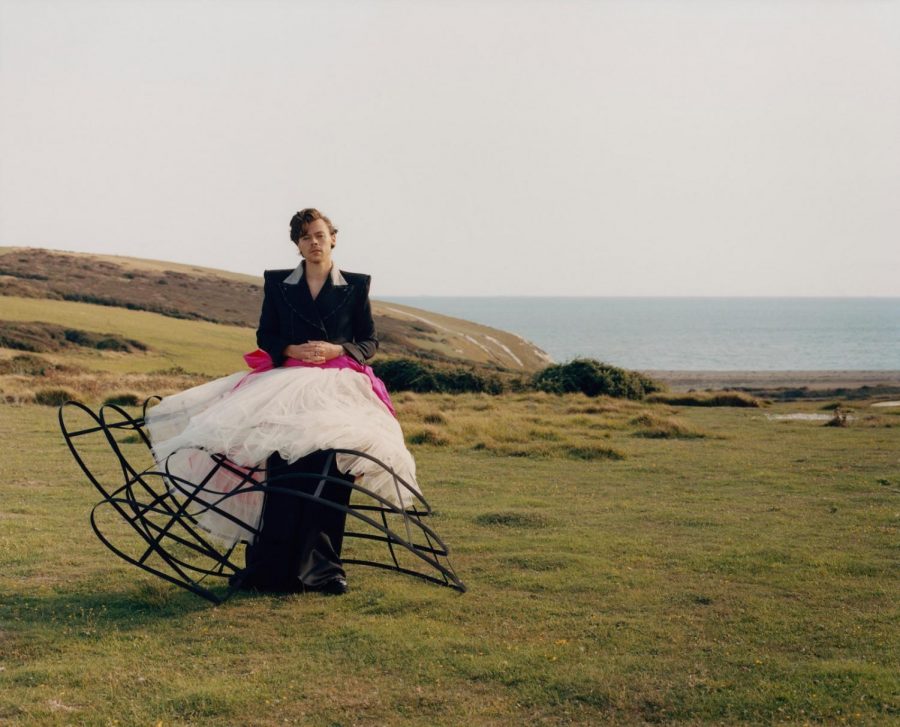 Between celebrities and common teens, the modern representation of untraditional appearances have been on the rise, foiling the social construct of gender. Credit: Vogue

Pink is a girl’s color and blue is a boy’s color, or so we’ve been told. We’ve grown up our whole lives with gender roles attached to everyday knowledge, but what defines something as feminine or masculine? Is there really a set definition for either one, or are they just social constructs? I lean towards the latter; the connotation of these words have been ingrained in our minds for so long, influencing our character and perspective of ourselves. Fortunately, we as a society have gradually been drifting away from these confining qualities as we start to embrace each unique identity.

Welcome to the 21st century, where self-expression is at its peak and old-fashioned ties are broken. Our society has evolved to realize how complex each individual can be, and we’ve been eager to illuminate the identities of those who have had weaker representation. The bending of gender norms is one of the many branches of this tree of opportunity. Wake up! Toxic masculinity is chipping away piece by piece, and inclusion is here to stay.

Gen Z avidly takes hold of this abolition as a vast number of boys experiment with different forms of expression. Whether it’s wearing makeup or strutting in a skirt, this generation has developed a driven mindset where people aren’t afraid to stand out, and this uniqueness is starting to become socially acceptable.

Birthed from this mindset is the “alternative” aesthetic, which has ramped up with a great deal of popularity. This is where anything outside of the mainstream look resides, including a mix of early 2000’s, emo, indie and more. Grunge eyeliner, platform boots and cheetah print; you name it, alternative fashion covers it.

Quarantine has also driven a number of adolescents to come to terms with discovering who they are. Reflecting on your own authentic self and recognizing the kind of person you want to be is the first step to combating these gender norms. The boldness that’s exhibited through appearance is just a product of this self-reflection.

The use of social media platforms plays a substantial role in helping to propagate this open-minded acceptance. The internet is the fastest tool to spread messages quickly, so as more people express themselves publicly, more viewers can be encouraged to show their authenticity and feel safe and comfortable in their own skin. Tiktok has especially been on the rise as it caters to young users around the world, so establishing your individuality on this platform takes this influence onto an international level.

@pierce_woodwardThese turned out better then I was expecting ngl. What should I try next 👀 #MyHobby #art #vibes♬ hot rod but slowed – Seth Stephenson

As relevant as this is today, the broken ties of gender norms stem back to cultures of the past. Iconic figures like Michael Jackson and Prince are representations of their African-American roots and the early abolition of these strict gender boundaries. Between bold makeup and glittery pantsuits, they paved the way for the normalization of non-conformity in the music industry while also representing their own ethnic minority.

Modern celebrities carry this fluidity onto their large platforms which lead to them influencing millions of fans. Harry Styles, a quintessential figure of this expression, is known for being fluid within his appearance, whether it be wearing a dress or tux. In the pictures where he modeled for Vogue, he expressed that “clothes are there to have fun with and experiment and play with. What’s really exciting is that all of these lines are just kind of crumbling away.” Rocking unorthodox articles of clothing has always been a genuine fascination for Styles, and he’s one of the many figures pinning down the fallen wall of toxic masculinity.

Every modern advancement also carries a plethora of backlash on its shoulders. Judgment plagues the perspective of onlookers in which the concept of bringing back “manly men” and the assumption of sexuality taunts those going against the traditional tide. This further proves how cemented the toxicity of gender norms are, extreme to the point that muscles and a suit are indicative of how capable a man is. The overall affiliation between appearance and competence is bizarre; a man shouldn’t be ashamed about what he likes and he shouldn’t contort himself to fit an old social construct. Clothing doesn’t define a person, it should only act as a mode to enhance character.

As this merge of femininity and masculinity draws closer, our society is continuing to travel on this paved path of expression, putting a twist on the future meaning of identity. Our lives are taken for granted so often that seizing the moment and maintaining confidence in yourself is extremely precious. So wear whatever you want; after all, seeing someone wear a piece of fabric won’t do any harm, right?