Showdown of the shoes: Docs, Vans, Converse and Nike 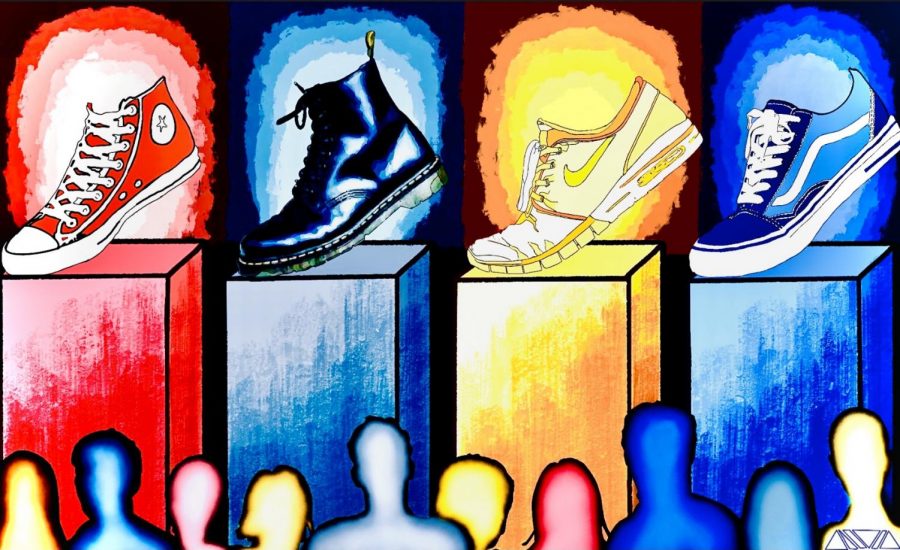 Read about and vote for your favorite shoe, dive into a battle between Converse, Docs, Nike and Vans.

A lot has changed in style, in culture, and at Foothill Technology High School (Foothill Tech) since 2013 when the iconic Converse vs. Vans article was written. Musically has been replaced by Tik Tok, BLK water has been replaced by Yerba Mate and Harry Styles somehow maintained his relevance through it all. So in the age of a global pandemic, Emma Chamberlain, sage green and rediscovering Pinterest, what footwear do Foothill Tech students prefer?

The last Foothill Dragon Press (FDP) shoe comparison article, written over seven years ago, still gets comments from eager shoe enthusiasts wanting to voice their opinion. Instead of just Converse and Vans being compared, we wanted to add Doc Martens and Nikes, two timeless brands that just made a comeback in the last couple of years.

Docs
A shoe that was popular when the parents of current Foothill Tech students were teenagers, Dr. Martens “combat boot” fashion has recently come back in style. Influencers such as Gigi Hadid and Rihanna have spotlighted the boots in their countless streetwear looks.

Making their debut in the late 1960’s, Doc Martens (Docs) have continued to release the high quality, trusty boots for generations. While they haven’t released as many new styles as other brands have, per say, they have added different variations and colors of boots, including the low-top, oxford shoe and sturdy strappy sandals.

They have many, many different styles of boots, however. If you were interested in just some simple, black Doc Martens to choose from, you’ll have to choose from about 50 pairs that look exactly the same.

Another new shoe Dr. Martens has announced is the Dr. Martens X WTAPS, which looks exactly like the boot I got from the doctor’s when I had foot surgery. The military aesthetic type-boot launched on Nov. 28.

Although vegan leather is an option, Dr. Marten’s focus is not on using eco-friendly materials. They have no policies or plans set in place about reducing their carbon footprint.

Chloe Scofield ‘22 can be seen sporting her maroon smooth leather lace-up Docs while hiking the long trail at Arroyo Verde. Scofield would consider her Docs as “a functional choice over a fashion choice” as they’re “super comfortable shoes once broken in.” She said she could “totally kill the Arroyo Trail” if she needed to, and I believe her.
Vans
With countless styles, colors and patterns, there really is a pair of Vans for everyone. Formally known as “America’s Skate shoe”,  Vans markets to surfers and skaters of all ages, although they have since broadened their stock to include sandals, boots and slip-ons that vary from the first original high-top skate shoe.

When it comes to sustainability, Vans talk a big game but lacks action. On their website, they have stated a plan for the reduction of greenhouse gas emissions and the minimization of textile waste, but no indication of a target goal or any visible progress.

Virina Saad ‘23 feels like Vans complement her girly chic streetwear style, because “they are really cute and comfortable.” Saad’s choice of shoe is white slip-on Vans because they “are super fast to put on, and they go with everything.” Her perfect outfit for a day out would consist of a cute top, some baggy ripped jeans and her trusty white slip-on Vans.
Converse
A silhouette of youth throughout the decades, Converse All Star Sneakers never seem to fall out of style. Converse sticks to what it’s good at when it comes to design, but it has recently branched out with a new boot-hybrid lugged sneaker and the All Star GR82.

However, she doesn’t feel confident enough to walk the long trail at Arroyo Verde Park in Converse, they just don’t have the level of support she would need. If Zarrinkelk wanted to branch out from the classic all-star hightop, Converse recently created the Run Star Hike sneaker/boot that boasts arch support.

Converse also took a discerning swing at Vans with their Chuck Taylor All Star Slip that feels like a lawsuit waiting to happen. Vans supporter Saad remarks, “Vans and occasionally Converse are the main two shoes I wear; It [the All Star Slip] should be the best of both worlds… but then it just isn’t.”
Nike
Of all four brands, Nike has the widest range of styles and the most numerous supporters. The brand can’t be defined or confined to a single look or function.

But Foothill Tech’s most beloved variations of Nike sneakers all seem to be descendants of the “Notorious” Air Jordan 1. Nike enthusiasts Jackson Vizzo ‘21 and De Angelos Allen ‘21 both prefer to sport Jordans.

Allen has an even more streamlined approach. Nike is his favorite shoe, specifically Air Jordan 1s, even though he feels his opinion is unpopular. Right now Air Jordans aren’t as popular as the low-top white sneakers. He remarked, “I know, everyone’s favorite is the Air Force 1s.”
“Their variety is insane, like it goes from running to style to sports to having low-top and high-tops,” Allen explains.
Neither fan of Nikes thought they would enjoy a hike in Jordans, but both mentioned the brand’s variety. Vizzo remarked how, “I would [hike] with a pair of Nike running shoes.”

The technicolor shoe has been going strong for 35 years, and Allen predicts that it will be in style for a long time coming. “I definitely do see them being in style 20 years from now,” he expressed.

Throughout the Dragon Press’ saga of shoe ranking articles, the way Foothill Tech wears these brands has changed. They don’t make 1460 Doc Martens in galaxy print anymore. Nowadays, 1461 Doc Martens are constantly sold out, while checkered Vans have been replaced by white Vans.

Black Converse are no longer the epitome of 2014 tumblr-grunge; colorful high-top Converse are in because Emma Chamberlain said so. Nike Jordans stay true to the ‘94 Jordan X name. “The legacy continues” as Foothill Tech students believe and observe that Air Jordans’ legacy will continue on for the next quarter-century.

For the time being, these four brands have a good monopoly over Foothill Tech students. Looking around on any given day (that isn’t via Zoom) Foothill Tech’s hallways are inevitably going to be filled by a stampede of Docs, Converse, Vans and Nikes.