The readers’ guide to the local city of Ventura elections 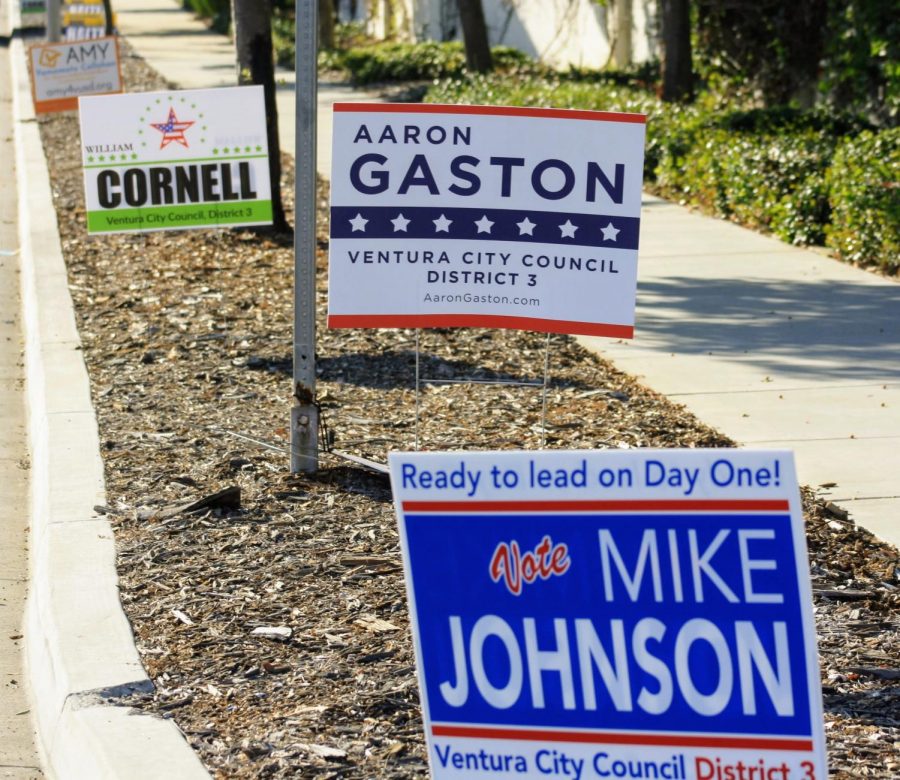 Now that the terms of several city council members have ended, it is time for Districts two, three and seven to re-elect new representatives to serve their districts for the next four years. Along with the presidential election, residents of the city of Ventura will also have the option to vote for local government officials on their ballots.

As many Foothill Technology High School (Foothill Tech) students prepare to cast their vote for the first time, it is crucial that they also understand how the unique system of local elections work. This process is still fairly new, so it is no surprise that many Venturans, experienced or not, are confused.

In Jan. of 2018, the City of Ventura transitioned from traditional to district-based elections to better represent each area of the city. A map with all the districts can be found here.

To prevent the council from consisting solely of newly elected people, the districts are on a rotation cycle. Every two years, a new set of districts are up for election, while the other districts wait until their council members’ term is complete before they vote again.

In 2018, Districts one, four, five and six became the first to vote using the district-based system, so districts two, three and seven will experience it for the first time this year. Each district has three to four candidates running for the position, and below is a short synopsis of their background and/or mission statement.

District Two –
Doug Halter: Doug Halter is a local business owner in Ventura, and has worked and lived here for 30 years. He wants to focus on starting and upkeeping beautification efforts in the city with higher standards and community policing. He also hopes to stimulate the economy post-pandemic with creative housing efforts, more local jobs and better disaster precautions. One of Halter’s goals is to change some of the government processes to include more technology and faster results.

Dougie Michie: Dougie Michie worked as a financial advisor for 39 years and has experience in the legal procedures of city council. He believes that his time as a Vietnam and National Guard soldier has taught him skills useful for a political position. Michie also earned a Doctorate degree in urban planning, so he understands the specifics of Ventura’s housing crisis, and hopes to use his knowledge to help provide more sustainable housing. In the past, he worked as a prosecutor for Los Angeles County, and he made it clear that he is against defunding the police.

Christy Weir: Christy Weir is the only candidate out of all the districts up for reelection to the position of city council member. She claims to have shown responsiveness and leadership in her last term, and hopes that people will vote for experience, especially during the COVID-19 pandemic. She wants to focus on enhancing the city livability and culture, while managing population growth and natural resources. Protecting the historic businesses and energy found in downtown Ventura are highly important to her as well as protecting the natural wildlife and habitats that surround the city. Weir also hopes to transform the community into a sustainable and eco-friendly place.

District Three –
Barbara Brown: Barbara Brown has been a local business owner for 25 years and a resident of the City of Ventura for 44 years. She has experience as a member and leader on the board for three organizations including the Ventura Botanical Gardens, the Public Art Commision, Interface Children Family Services and Goodwill Advisory Board. She empathizes with the business owners who have suffered during the pandemic and hopes to help them and their businesses get going again. In light of recent events, she plans to put better protocols for natural disasters in place and work towards protecting the quality of life for all residents of Ventura.

Aaron Gaston: Aaron Gaston used to be a business owner and is now a realtor in the city, so he has had experience with both small businesses and the housing crisis. His main focus is to boost the economy with smart growth that would not overwhelm the housing market or natural resources. This would benefit small business and company owners who struggled with income after the COVID-19 pandemic shut down everything in the spring and early summer.

William Cornell: William Cornell has been the business owner of a local construction company for 15 years and has experience with the Housing Committee from a past position as a City Commissioner. His visions for Ventura are to keep neighborhoods clean and safe as well as offer access to healthcare for as many people as possible. He is running to help keep Ventura on track after coming upon hard times by improving public safety, quality of life and development for the economy and the community. He is registered with the independent party but identifies as a fiscal (financial) republican.

Mike Johnson: Mike Johnson has previously worked as a teacher and has knowledge of the city’s logistics. He spent 10 years on the College Area Community Council which allowed him to explore the pros and cons of each district. He also served on the Economic Development Subcommittee, Homelessness/Affordable Housing Subcommittee, Measure O Oversight Committee and the Water Commision. He has acknowledged the city’s many issues, but claims that it is better to have an understanding of how these problems came about before trying to fix them altogether. He hopes to make Ventura a prime destination for businesses and families.

District Seven –
Heather May Ellinger: Heather May Ellinger has been a resident of Ventura for 25 years and works as a local real estate agent. She also worked on the board of the Parent Teacher Association (PTA), and she helped many families with property entities as Mortgage Field Inspector. Her hope is to start by fixing the city budget to focus more on large businesses and corporations, therefore bringing more money to the city in revenue. She plans to tackle the population of homeless living in the river bottom by instituting new laws for the homeless and enforcing pre-existing environmental laws to protect the river bottom.

Nancy Pederson: Nancy Pederson has worked as a business and legal executive for more than 40 years and has been a resident of Ventura for 10 years. She owns the downtown shop known as Sunflowers of the Square, and she has held positions for the Best-Day Foundation, the economic vitality of Ventura, the Ventura Visitors and Convention Bureau and a Ventura start-up. Through these positions, she has gained knowledge on Ventura’s many operations as well as proved herself to be an efficient leader. She hopes to help Ventura fix many of its issues by stepping back and looking from new angles to find better solutions.

Joe Schroeder: Joe Schroeder has had 35+ years of experience in fiances and is now the retired CEO of the Ventura County Credit Union (VCCU). He has had experience with managing both people and money through volunteering as chairman for FoodShare, co-founding the Global Women’s Leadership Network, instituting VCCU program assisting agricultural workers and creating a program that paid VCCU employees to partake in community service opportunities. His goals for the city include protecting public safety and natural resources by updating current environmental policies for coastlines, beaches, parks, etc. as well as monitoring economic growth to benefit, but not overwhelm the community.

Michael James Nolan: Micheal James Nolan is a local realtor and has been a resident of the City of Ventura for 13 years. He opted not to submit a candidate statement to the city government website. However, his official campaign Facebook page detailed some of his hopes and qualifications for the job. He has a bachelor’s degree in marketing and job experience in grocery and wireless telecommunications. His mission is to lower the crime rate, keep the sales tax as is, keep public parks open and free and institute a program for resident preference. He also wants to bring development and tourism without destroying small city charm.

In an effort to better understand each of the candidates, the Foothill Dragon Press reached out to all of them via the email listed on their campaign website. As of October 25, two responses were received from Doug Halter (District 2) and Aaron Gaston (District 3).

The candidates were asked three main questions revolving around current issues and solutions for Ventura, their motivation for running for office and what they plan to tackle first if they were elected.

Doug Halter pushed the idea of economic vitality and its benefit to the city. He explained the lengthy processes found in government and how he planned to alter them to provide results in a more timely manner. He stated, “I know the issues, the barriers and the love that I share for our community and know that now more than ever we need to set a new course; the trends for Ventura are not good.”

He then transitioned into talking about his role in society as a business owner and long-time resident of the city. “My skill sets of problem solving, visioning and new ideas and proven leadership and results, coupled with my life knowledge and love for people and deep passion for Ventura is sorely needed at the policy level and I will humbly and with honor use my time working with all of our community to lead us to a more prosperous future!” expressed Halter in his email.

He believes that he has the ability to create positive change for the community and its future, and therefore it is his duty to try. He concluded his response with a plea to the citizens of District Two to vote for new leadership instead of the returning incumbent.

Aaron Gaston acknowledged the economic tragedy that has occurred as a result of the shutdown connected to the COVID-19 pandemic. He stressed the importance of keeping the economy afloat to protect the quality of life for citizens. His proposed solution would be to reorganize the budget to help struggling businesses and people get back on their feet.

He stated, “We need to make fiscally responsible cuts wherever possible; however, I am not in favor of significant public health or safety cuts.” He further explained that his first order of business on the council would be to improve communication between councilmembers, therefore benefitting the city in the future when collective decisions need to be made.

“I believe in teamwork, not divisiveness, is essential to solving the challenges we are facing in this unprecedented public health and economic crisis,” declared Gaston. His long history as a business owner, realtor and resident of the City of Ventura has motivated him to get involved in local government now that his full attention can be given to the cause.

Gaston also gave an extra comment explaining in detail his family’s history living in the city, founding the company Infogrip and even that his daughters were past alumni of Foothill Tech.