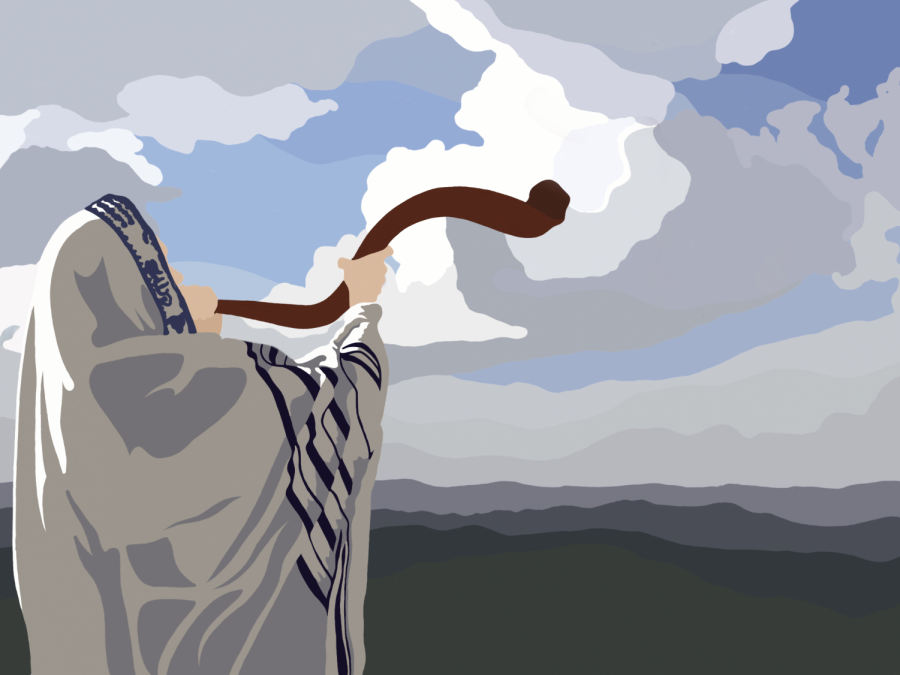 The celebration of Rosh Hashanah begins in late September, and is filled with activities from reflecting on the good intentions accomplished in the year to dining on the customary meal of challahs and pomegranates.

Rosh Hashanah, “the head of the year,” is celebrated by the Jewish community all throughout the diaspora. Starting at sundown on Sept. 18, the 29 of Elul, the Jewish lunar calendar resets to the first of Tishrei and Rosh Hashanah (räsh-(h)ə-ˈshä-n) kicks off the High Holidays.

The chag holiday dates back to the time prior to the destruction of the second Holy Temple, the Beit Ha-Miqdash, in 70 CE. Rosh Hashanah is usually celebrated for two days and is marked by the sounding of the shofar, a ram’s horn, at Synagogue.

Rosh Hashanah is a religious holiday in the aspect that the festivities start the days of judgement, when Gd (in Judaism Gd’s name cannot be written out) judges each Jew, not on their wrong doings, but on their effort to be good. If the person consistently tried to be better throughout the past year, their name will be inscribed in The Book of Life and they will continue on. For a nation dispersed, lots of Rosh Hashanah traditions are universal amongst Ashkenazim, Sephardim, and Mizrahim.

At the center of the holiday is the Rosh Hashanah seder, a festive meal. Some classic Rosh Hashanah seder foods are circular challahs (braided egg bread) for longevity, pomegranates with 613 seeds to represent the 613 mitzvahs or good deeds in the Torah, and apple slices and honey for a sweet new year. Certain foods are regionally specific like Ashkenazi honey cake and Mizrahi/Sephardi leek latkes. The Hebrew word for leeks resembles the Hebrew verb “to cut”, so leeks are eaten, thrown or ripped in half to ask Gd to cut their enemies out of their lives.

Bete Israel, or house of Israel, are the Jews of Ethiopia, most of whom live in Israel today. Bete Israel was cut off from other Jews for a millenium, meaning Jewish oral law wasn’t introduced to Ethiopian Jews until the 20th century. The version of Rosh Hashanah Bete Israel practices today may be the closest to what Rosh Hashanah was during the time of the Second Temple (350 BCE to 70 CE). Rosh Hashanah is known to Bete Israel as “Brenha Serkan”, or “the rising of the dawn” in Amharic. The Kessim (Ethiopian Jewish priest) rises before dawn on Brenha Serkan to begin the first prayers of the day. Lamb is a traditional staple for an Ethiopian Brenha Serkan/Rosh Hashanah meal.

Bene or B’nei Israel, meaning Son of Israel, are the Jews of India. Descending from one of the lost tribes of Judea, Bene Israel has had a unique Jewish experience, as they lived virtually in harmony with India’s population. Most of Bene Israel now lives in Israel. Indian Jewish food and fashion for Rosh Hashana is very unique; women wear colorful saris for Rosh Hashanah services, a contrast to the plain white attire for Rosh Hashanah most other Jews wear, and eat Biryani, a versatile rice and curry dish, and Milk halwa which is similar to Israeli sahlab.

This Rosh Hashanah, the world needs all the superstition it can get. 5780 was a rough year, this year calls for lots of beets (to leave the old year behind), haricot vert (for a heartened year) and most importantly, lots of apples and honey. Shana Tova!