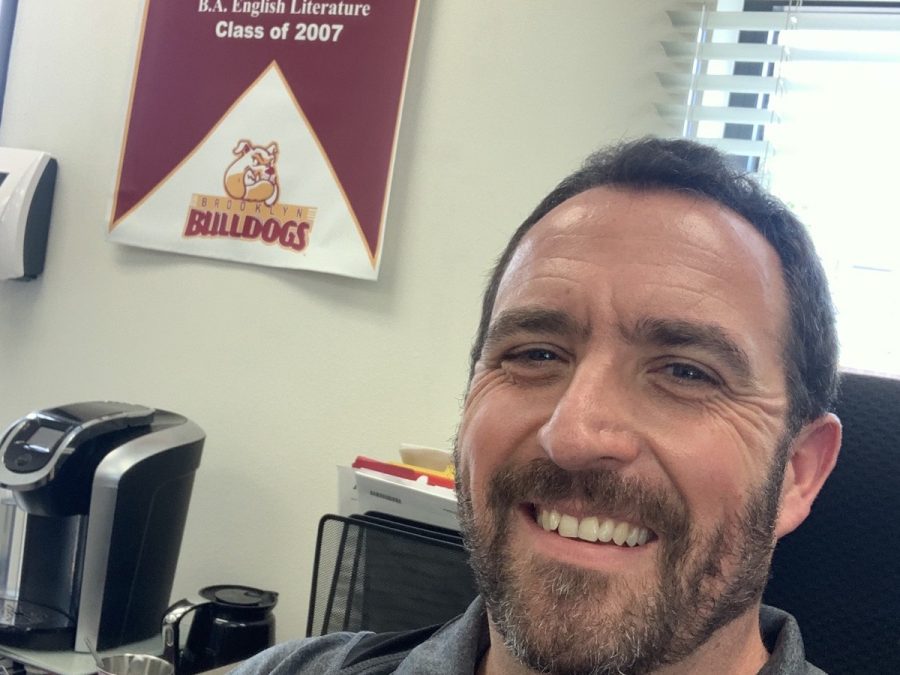 New Foothill Technology High School (Foothill Tech) principal, Russell Gibbs, is prepared to navigate the new world of digital learning. Although this school year may present unique challenges, Gibbs is ready to pick up where former Foothill Tech principal Joe Bova left off. Under the gloom of the current pandemic, Gibbs knows that this year will be like no other. Yet, he acknowledges the fact that this year is the time for taking risks and accepting the situation that students, teachers and faculty are faced with.

Having formerly taught in the state of California, Gibbs has always been impressed with Foothill Tech’s high level of recognition. He first noticed the Blue Ribbon seal on the letterhead of a student’s transfer papers and was under the impression that everyone who attended was accepted to a four-year university. The letterhead made Foothill Tech sound like, “the best school in the world” and “swanky” Gibbs said.

Before settling down to work at Foothill Tech, he had been a teacher for eleven years in New York, Chicago and California. Gibbs was a journalism advisor for two years at Grant Community High School. An English teacher at heart, he taught classes at both Ace Charter High School and Rancho Campana High School. Before landing the role of principal at Foothill Tech, he was the assistant principal at Hueneme High School. Before entering his teaching career, he used to work at Olive Garden as a waiter and bartender, manufactured skylights and even climbed telephone wires to install cable for AT&T.

Originally abandoning the typical path of going to college directly after high school, Gibbs waited for five years to pursue his educational career. His love of music; blues, jazz and more importantly, metal, was born when he stole his brother’s Metallica record when he was in first grade. This passion for music fueled his desire to perform live and sing in a band. Gibbs was paid to perform at concerts, got signed by a small label and released a compilation album.

Under the principal exterior, Gibbs is a fan of horror movies, but he still has a soft side and enjoys watching Disney movies with his two daughters. One of his daughters is in kindergarten and the other is three years old. His wife is a former professional ballerina and now teaches ballet at a dance school in Santa Barbara.

When he’s not working, Gibbs enjoys weight lifting. He has written two novels and a collection of short stories. Before he started a family, he was in the process of obtaining a literary agent with the hopes of one day being published. When he finds a moment to spare, he enjoys playing golf.

During his high school years, Gibbs struggled academically but thrived socially. He had a difficult home life when his parents struggled with alcoholism and later got divorced. Regardless, Gibbs persevered. His group of friends, U.S. history and geometry teachers were always by his side. These two teachers “really took me in, and they really told me everything was going to be okay, and they were just like, ‘you have to grin and bear it’,” Gibbs said.

Although he didn’t have the most ideal high school experience, his advice for teenagers is, “If you’re having a really rough time, everything gets better. High school for some people, it’s the best four years of their life, for some it’s, ‘I can’t get these four years over with’. Either way, I think you kind of know exactly what you want to do in high school. There’s something in your gut that tells you what you want to do and just don’t forget what that is.”
“You’re pretty much are who you are in high school into an adult […] so just enjoy who you are, because you’re going to be with yourself for a long time,” Gibbs said.
Part of his reasoning for becoming a principal himself was his own principal, Dr. Love, also known as Bob Love, a retired small forward for the Chicago Bulls basketball team. Having formerly been a teacher himself, Gibbs understands the role of principal on a deeper level. While teaching, one of his principal’s had purchased a large number of novels for his class, “I thought that was the coolest thing ever, so I was like ‘oh that’s what principals do! They support teachers, and make things awesome for students’, so I’m like, ‘I wouldn’t mind giving that a try’,” Gibbs remarked.

Foothill Dragon Press · Gibbs On Why He Wanted To Be Principal

Gibbs is here to ease the challenges that come with the digital transition and is eager to meet with parents, teachers and students via Zoom. He’s setting up meeting hours for parents and students to meet with him to discuss any concerns, “I just need to be able to sit in front of a screen at an opportune time for parents and just let them know that I’m available for them,” Gibbs explained.

His goal is to make Foothill Tech a place where “when kids come here they have the opportunity to change the world.” Whether it be students becoming the first person to go to college in their family, having a professional career, starting a business or helping the community.

Gibbs describes himself as “annoyingly patient.” As a former English teacher, he enjoys hearing both sides of the story before reaching a final decision. He thinks out his words methodically, “I listen very well, almost to the point where people are like,‘Woah, why isn’t he saying anything’, you know, I guess I’m just very careful when I speak,” Gibbs explained.

This year will present obstacles, but Gibbs noted the resilience of students having experienced both the Thomas Fire in 2017 and the COVID-19 pandemic, “I think it’s going to be a total attitude change for an outlook, like a really positive outlook on just like how you deal with things on a day to day basis. You’re probably going to be the most resilient and flexible group of people that have probably ever existed, concerning what you guys have been through,” Gibbs replied.

When the Zoom screen glitches and the audio is subpar, students should remain positive and imagine that “in 20 years from now, when we come back for the reunion, it’ll be nothing but a laugh-fest,” Gibbs said. Foothill Tech’s new principal, Russell Gibbs, is a beacon of help for students, teachers and parents alike, “If something’s not working for you, I’ll do everything I can to make it right, or if you just need to be heard, I’m here to listen.”