The Foothill Dragon Press • May 2, 2020 • https://foothilldragonpress.org/271371/news/ventura-protesters-call-for-an-end-to-california-shutdown/

Ventura protesters call for an end to California shutdown 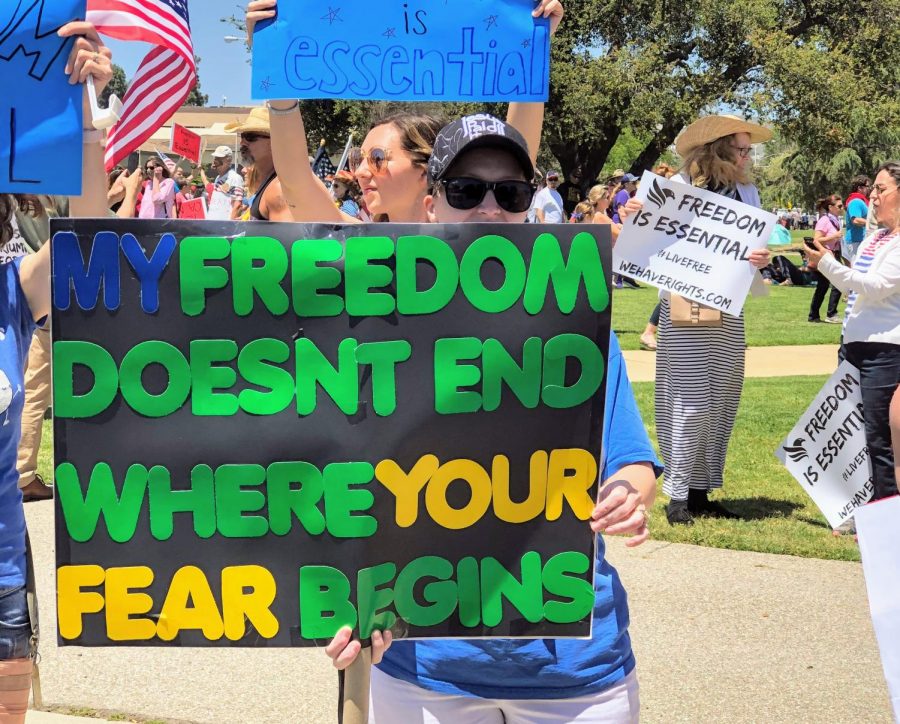 A woman participating in the protest holds a sign that states, "My freedom doesn't end where your fear begins."

At noon on May 1, 2020, a large and passionate group of protesters gathered outside the Ventura County Government Center, demanding a full reopening of California. This protest comes more than a month after Governor Gavin Newsom issued a stay at home order due to COVID-19. Similar protests were held on the same day across California in Los Angeles, Sacramento and San Francisco.

Protesters gathered on the corner of Victoria Avenue and Telephone Road with decorated signs as cars honked as they passed those assembled. Some cars circled through the government center and drove as a parade around the protest.

Many protesters dressed in red, white and blue and held homemade signs with a variety of slogans and messages. Some read: “Open churches,” “Fully Open California,” and “All jobs are essential.” A handful of protesters wore face masks, but most did not.

At the heart of the protest, multiple people spoke and at one point the group was led in a rendition of “God Bless America” and “This Land Is Your Land.” The occasional American flag and “Trump 2020” flag waved through the crowd on the Government Center lawn.

Beyond the protesters, a line of counter protesters stood against the rally. Wearing medical scrubs and masks, four people, presumably healthcare workers, stood six feet apart from each other on the center median, in a line with their arms crossed.

According to the Facebook event advertising the protest, the event was organized by Gina Bacon, Jessica VanderZwaag and Rick Sanchez. The protest is a continuation of the We Have Rights movement.

When asked why she was protesting, Colleen Cocklin explained, “our freedom is being infringed upon” and “the virus” is no longer an imminent threat. Another protester simply said, “tyranny.”

Protests like this have garnered controversy due to split opinions among Californians. Foothill Tech science teacher Mika Anderson emphasizes that “stay at home orders are extremely, extremely important for people to abide by.”

Although she acknowledges people have the right to protest, Anderson believes if, “we all abide by the orders and take the advice of our [medical professionals] we will get through this pandemic faster than with people protesting and disregarding the sound medical and scientific guidelines.”

However Colin McClain ‘20, fully supports the right to protest and believes that “the city, in order to keep us safe, should let us work and feed our families.”

In contrast, Foothill Tech teacher Dan Baker warns of a potential second wave of infections. “One issue with infectious organisms is that the longer they are in a population replicating, the more chances there are for mutations,” explains Baker.

“While COVID-19 is deadly, a mutated COVID-19 could be worse, and that could be a very real risk of loosening social distancing guidelines prematurely,” stated Baker.