The Foothill Dragon Press • May 7, 2020 • https://foothilldragonpress.org/271266/feature-stories/the-artist-behind-ruined-that-ella-oliveras-22/

The artist behind “Ruined That”: Ella Oliveras ‘22 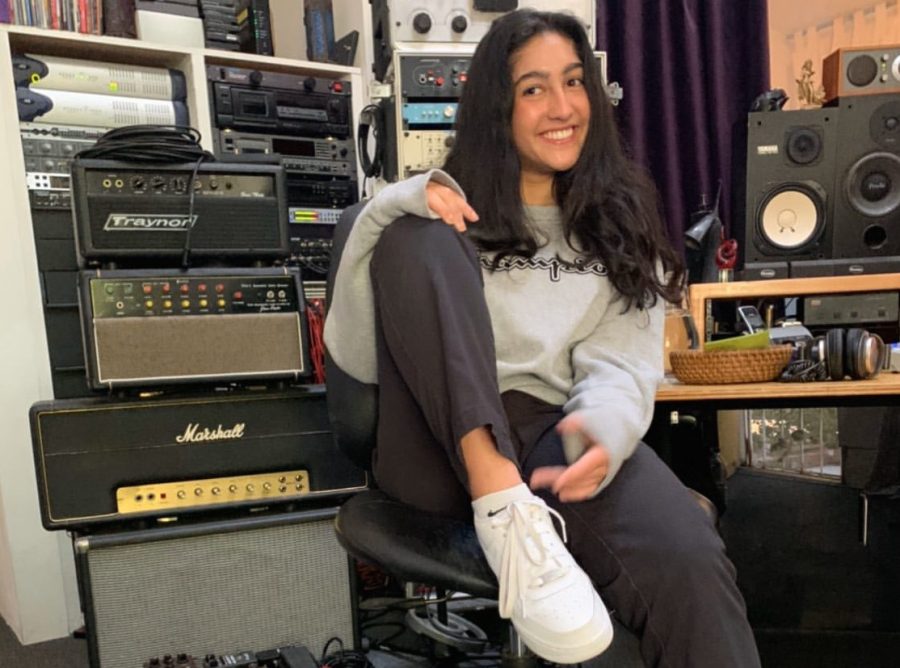 Ella Oliveras '22 in the studio working on her next song (image by Ramtin Noury, used with permission).

In the age of the internet, many people find their dream of becoming a well-known musician a real possibility. Ella Oliveras ‘22, a student at Foothill Technology High School (Foothill Tech), has started her musical journey by releasing her single “Ruined That” on Jan. 24, 2020. Her original song is available on many platforms like Tile, Deezer, Soundcloud, Spotify, Amazon Music, Youtube Music and Apple Music.

She describes her initial spark to music from a young age. Oliveras has been singing “ever since I could talk,” and at that time her favorite song to sing was the traditional nursery rhyme, ‘Twinkle Twinkle Little Star’. Her passion only grew as she began to connect musically with her uncle. Oliveras remembers having a deep connection with him and music while singing Rihanna’s songs at only three years old.

Oliveras was inspired by the popular music she heard throughout 2005 with artists like Taylor Swift. “I never imagined that I could potentially go that far, but I always looked up to her and thought ‘wow she’s like at a really young age and she’s doing something that she loves which is incredible.’”

Music plays a big role in Oliveras’ life and her desire to sing never burns out. She is constantly learning new songs and building her skills as a singer. For anyone, it’s hard to pinpoint an exact favorite musical artist or band, but she’s been inspired by artists like Jordan Smith, Audrey Mika, Sabrina Claudio and Daniel Caesar.

Oliveras’ single, “Ruined That”, had a humble beginning. One late night when she couldn’t sleep, she watched Youtube videos of girls singing covers of songs. One of them was a cheesy love song which she described as being “brilliant, and it was really cool.” This inspired her to begin writing a real love song about a character that was in a relationship and got hurt when she realized that the relationship meant more to her than her partner.

Even though this is the first song that she has released, it’s far from the first song she’s written, “I started writing when I was seven years old, like the first song I wrote was about pictures in my grandma’s room,” she said.

Her song writing process begins with a melody she usually finds herself humming along to. For “Ruined That,” she finished watching videos and turned her laptop off. She was staring at the wall before she fell asleep and began to hum the beat. In a moment of inspiration, she quickly turned on her light and pulled out her writing book. She had started with the pre-chorus of the song with a lyric like “back to back” and before she knew it, the first draft had been done in a half hour.

For many, the process of releasing a song to share with the world is uncharted territory. Oliveras said that releasing a first single can be difficult, because you have to navigate signing contracts and figuring out who gets a percentage. After she wrote her song, she brought her song to a studio and her producer, Evan Sponseller. She gave him the lyrics, sang it, and told him what the song meant to her as he continued to work on the catchy beat. Having a producer can be an essential part of writing a song because “the music is a big part of how you want the song to feel,” described Oliveras.

Her goal is to make music that her listeners can relate to. “I need me to like it first before anyone else can enjoy it and I think that the hardest part would be not trying to make my sound revolve around everyone else’s perspective,” explained Oliveras.

Oliveras advises dreamers like her “that if you’re trying to start to create a sound or put yourself out there, be vulnerable with people and honest and real and create music that makes you happy,” and this piece of advice can apply to anyone, not just those who are in the music industry.

She has many plans for the future, like creating a lyric video for “Ruined That”. She’s been writing a lot and she promised that “there should be a new single out maybe sooner than you think.”

Oliveras has performed at multiple music festivals in Oxnard. One day she hopes to sing for a Foothill Tech event, like Air Guitar. She’s grateful for the opportunity to sing with her worship group, as her confidence continues to grow and singing in front of others becomes less nerve-racking.

“The most rewarding part is being able to make something that people can relate to. I mean I just hope that people enjoy it and that they get something out of it,” Oliveras explained. With a memorable beat to dance along to and personal lyrics, the song can relate to someone still in love or experiencing a breakup. Just by listening to her newest single “Ruined That” you can see that Ella Oliveras has a bright future in the music industry, and her listeners can’t wait to hear a new song!