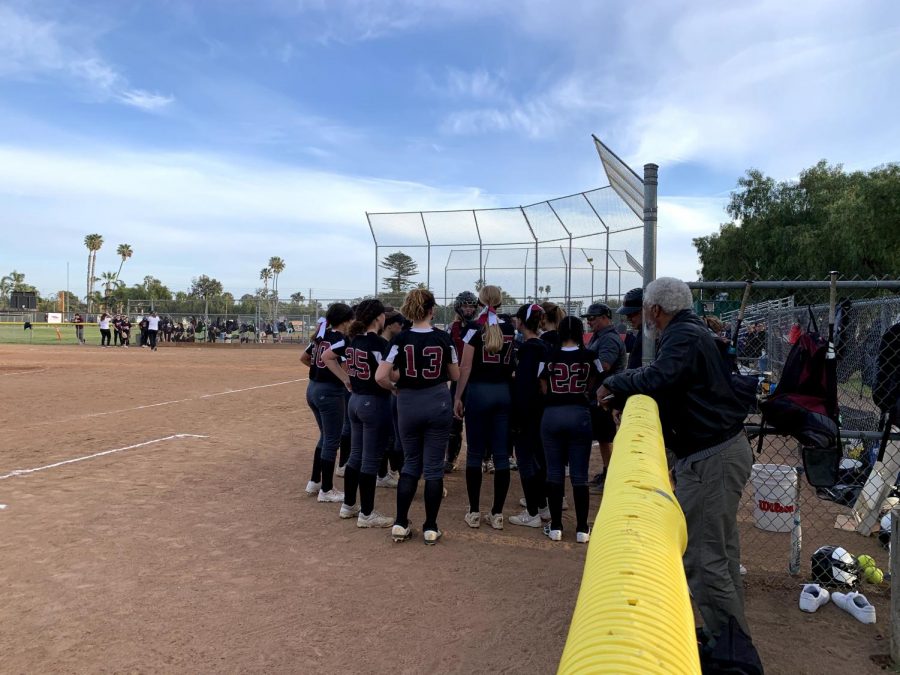 The dragons huddle during a timeout.

The chilling breeze and the quiet campus of Ventura College refused to work in the favor of the Foothill softball team as they suffered a distressing defeat after not being able to hold onto their lead in the later innings of their game against the Grace Brethren Lancers. The match on March 5 ended in a losing battle with a score of 4-2 in favor of the Lancers.

The first inning began with the Lancers at bat, but Dailyn Thompson ‘21 pitched easy outs for her team with her strong arm. When it was time for the Dragons to step up to the plate, Sammy Fenton ‘20 hit a line-drive double to left field which generated a wave of energy through the crowd. Maddy Houvinen ‘22 was the next to step up and was awarded first base by getting hit by the pitch, putting runners on first and second base. Next was Natalia De La Rosa ‘20 who hit a line drive to bring Fenton home, making the score 1-0 by the end of the first inning.

Thompson commented on their opponent, Grace Brethren’s: “They’re a pretty good team, they just got a new pitcher. She’s a freshman and she’s pretty good, but they were some fair competition so I think we did well against them.”

The second inning produced no score to either team, which was largely attributed to outfielder Katherine Roth ‘21 who caught two long fly balls in the outfield.

The Lancers had no opportunities to score in the third inning, but the Dragons struck again to get the score to 2-0. With two outs already, catcher Celia Porrazzo ‘22 slammed a ball straight down the middle to earn her way to third base. Jade Barretto ‘21 was the next up to bat, and she secured the second point of the game with a base hit, bringing Porrazzo home.

With no changes in the score during the fourth and fifth innings, the Lancers went into the sixth looking for retribution. They scored two runs, tying up the game and putting pressure on the Dragons. The crowd waited anxiously for the Dragons to secure a lead, but the Dragons were unable to retaliate in the sixth inning.

The seventh inning continued in the same pattern as the previous inning, with the Lancers taking control of the game and scoring two more runs, ending the game 4-2.

Head coach Jere Dietz commented on the challenges the Dragons faced, saying that they “had a couple missed cues in the sixth and seventh inning that allowed them [Grace Brethren] to score the tying and go-ahead runs.” Dietz finished off saying that the “team played really well” despite their fallbacks.

He continued with a more optimistic mindset as he projected about the rest of the season. Dietz reflected that the team is “young, last year we graduated seven seniors so this year’s a young team so we’ve got to figure it out. Right now we’re in that figuring out mode. This is probably our best game that we’ve played so hopefully, we can build from here.”

Thompson commented about the upcoming season and says, “we’re improving every game so I have high hopes for us.” Fenton commented in a similar manner saying, “if we play like we did today, it should be a good season.”

The girls are motivated to face off against their future rivals in this upcoming season.