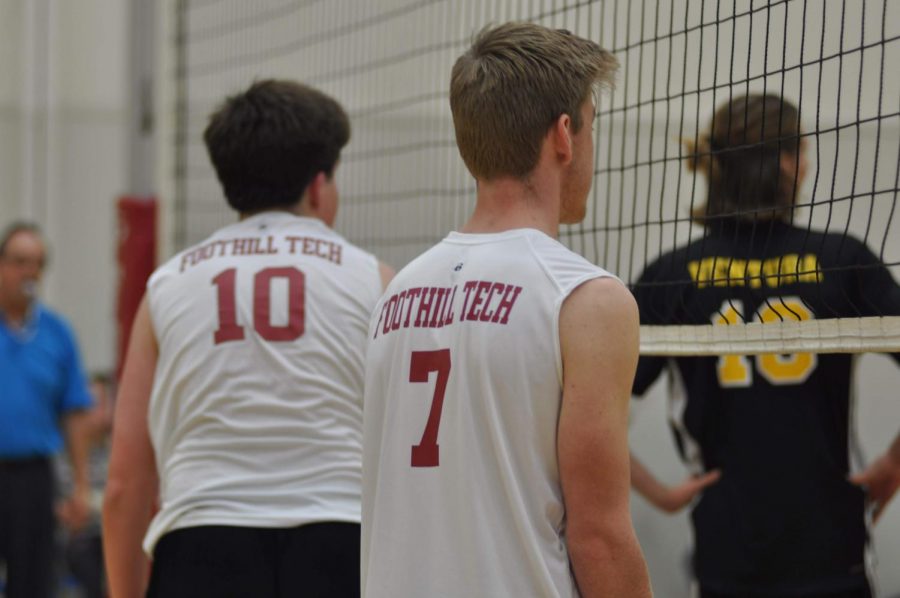 Chance Callaway '21 in position as the opponent Ventura High School sets up and serves the ball over the net.

Excitement filled the gymnasium at Cabrillo Middle School. Fans from both schools, Foothill Tech and Ventura High, met here on Mar. 3 to watch the boys’ varsity volleyball teams face off in a high intensity match. The Dragons warmed up with a confident rhythm, feeling at ease on their home court. Once both teams had congregated to strategize and set up in their rotations, the game commenced.

Matthew Godfrey ‘20 served first for the Dragons and the game began with an easy point for Foothill after the Cougars’ return fell out of bounds. Sam Shinsky ‘20, Cooper Armstrong ‘20 and Godfrey kept a slight momentum at the beginning of the first game, with all of them contributing equally in excellent blocks and kills.

The Dragons kept a small lead alive, even enough to stay right with the Cougars until they pushed ahead to 11-10. It was at this point Foothill lost a lead that they would never get back. A few short passes, or out of bounds serves, and the Dragons were behind by only four towards the end of the game.

Unfortunately, in the end, it was a double hit violation that allowed Ventura to take the first win of the night at 22-25.

In the second game, Ventura took a substantial lead that they managed to maintain throughout the entire game, taking advantage of Foothill’s minor mistakes. Between net violations, short serves and out of bounds hits, neither team was having a very successful game. The highlights included more excellent offensive efforts from Godfrey, Shinsky and Armstrong.

Ultimately, the Cougars took the second set 20-25, placing them in a position with only one more set needed to win the whole game.

But the Dragons weren’t ready to relinquish their competitive fire. Godfrey began the third set very strong, with an uncontested kill for Foothill. The Dragons built off of this momentum, growing a lead thanks to the tips and hits of Matt Kyle ‘22, Godfrey and Shinsky.

When asked about the factors that kept the Dragons competitive in the game, Kyle confidently answered: “definitely passing, we’ve been struggling with passing, and we did actually a lot better with that today.”

Foothill’s impressive comeback was also attributed to the blocking power of Bodhi McDonald ‘20, and powerhouse Godfrey’s consecutive ace serves. The Dragons finished off the set with an ace served up by Armstrong, winning 25-14.

The Dragons finally found their rhythm and continued their excitement into the following set.

In a similar pattern to the previous match, the Dragons gained slight traction in their game that gave them a consistent lead for the remainder of the set. Armstrong, Godfrey, Kyle and Shinsky, along with the help of Chance Callaway ‘21, battled the entire time, sustaining a ten-point lead towards the end of the game.

Ventura struggled with a myriad of mistakes, such as net violation and tools that cost them the set. Foothill took advantage of this, claiming a victory of 25-18 due to a speedy tip over the net by Armstrong.

The anticipation for the final set was nerve-racking and had the entire crowd on the edge of their seats, hungry to see a victor in the match.

The fifth game was a see-saw of point exchanges, ties and minuscule leads that kept everyone wondering where the final victory would lie. Godfrey kept the spirit alive and the team motivated, while Armstrong had several excellent serves.

Both teams suffered a few technical missteps such as shanking a pass or hitting out of bounds, but in the end, it was the Cougars who came out victorious winning by a slim 12-15.

“This is still preseason, we’re still working it out, it’s still a working progress,” Coonan said. “Every volleyball team improves over the season.”

The boys’ volleyball team will return to their home court, prepared to avenge their losses in a face-off against Laguna Blanca on Mar. 10 at 6 p.m.