The Foothill Dragon Press • May 2, 2020 • https://foothilldragonpress.org/270996/feature-stories/our-health-may-lie-among-the-greenery/

Our health may lie among the greenery 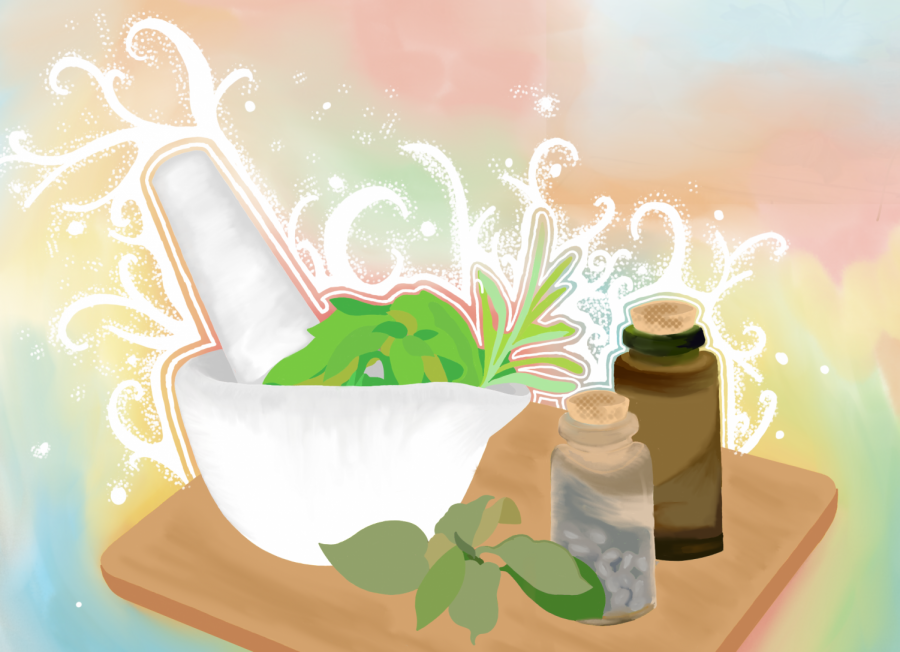 The idea of herbal medicine not being a calculated solution implies a negative connotation to its effectiveness as a medical treatment, but its untapped potential could one day be discovered.

When you go to the doctor, they may do a number of things to check up on your health. They might check your blood pressure using a sphygmomanometer, or your heart rate with a stethoscope. Maybe you get a couple shots to fight future viruses. The science of medicine has come a long way over the centuries, with new methods and treatments being discovered all the time. But what about its beginning? What did the human race use to stay healthy before all of these advancements?

Herbal medicine has been used for over 5,000 years, long before any complex medical technology was developed. Before discovering agricultural practices, ancient human beings hunted or gathered for food. They used resources that naturally grew in their environment, and became experts on how to use them efficiently.

Herbs are an example of these natural resources. In 1500 BCE, ancient Egyptians wrote Ebers Papyrus, a guide on the usage of over 850 herbal medicines. Chinese emperor Chi’en Nung, also known as the Father of Chinese Medicine, wrote Pen Tsao, a detailed handbook informing readers on some 365 remedies.

As people began to discover the importance of health and its direct association with diet, more resources went into researching the properties of certain herbs. During the 15th and 17th centuries, the study of herbal medicinals and their documentation was at an all-time high. Many handbooks were translated into English, whereas previously they were available only to those who could read Latin or Greek; Grete Herbal, published anonymously in 1526, was one of the first herbal books to be written in English.

During the late 19th century, a group of physicians began experimenting with herbs and different therapies. These physicians were known as the Eclectics and were responsible for forming more advanced medical techniques such as purging, bloodletting and mercury-based medicines. Although these techniques were later discovered to be dangerous, they effectively opened a gateway of improvement in the medical world.

The FDA recognizes herbs as food, not medicine. With all the amazing benefits herbs seem to possess, why isn’t more research being done regarding their legitimacy? The American Medical Association, or AMA, is the main reason. While herbalism was flourishing in the late 19th century, the AMA slowed this progress by creating more concrete rules concerning health and medicine. They regulated the education system and set down rules many medical schools could not meet. Herbal medicine was put on the back burner, and the more traditional medicine we know of today took its place.

Herbal medicine is not an exact science, so the regulations set in the past may have been for the best. However, learning about herbs and their properties still holds great importance. Who knows, maybe the world’s next miracle cure resides in the leaves of some inconspicuous plant.