Girls’ soccer takes a breezy 3-1 win over Fillmore Flashes, advancing to second round of CIF playoffs 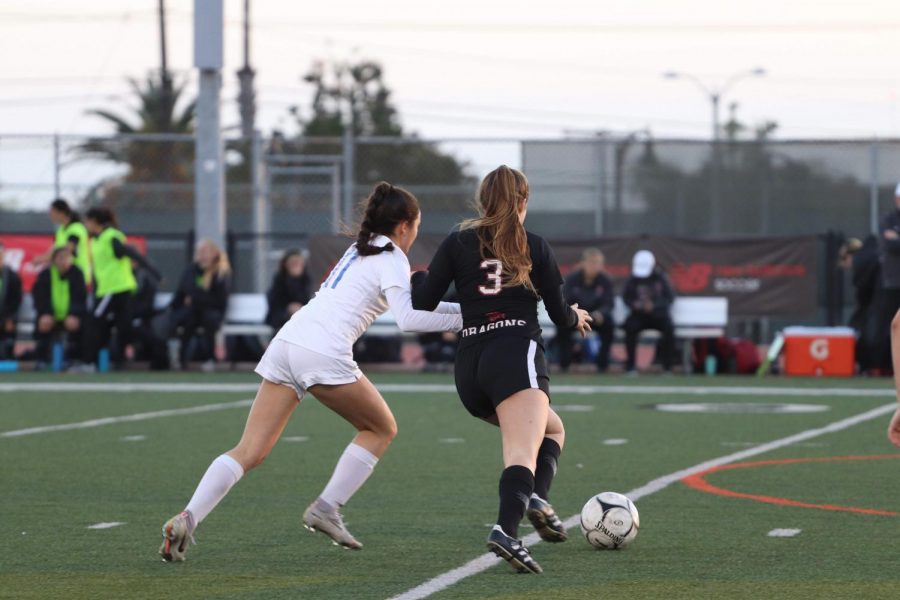 Elice DeLong '20 dribbles around the defender.

The brisk winter air had a crowd of parents, students and onlookers shivering with anticipation at the Ventura College stadium on Feb. 13. It was the first round in the Division 4 California Interscholastic Federation (CIF) playoffs for the Foothill Technology girls’ soccer team, and the excitement was unmatched. The varsity team huddled together one last time before the five o’clock game, strategizing until the final seconds leading up to the face-off with the Fillmore High School Flashes.

Fillmore began with possession of the kickoff, pushing hard to maintain offensive control, but the Flashes were struggling to keep up with the Dragons’ skillful defensive efforts.

Two of the Dragons’ starting forwards, Grace Combs ‘20 and Ava Sivoraraj ‘20, took care of the ball incredibly well, working together and passing effectively to earn an exciting goal from Combs, assisted by Sivoraraj, within the first five minutes of the game. This pulled the Dragons into their consistent lead as the scoreboard read 1-0.

Combs thought that it was, “good that we scored early on because it gave us some confidence,” and also mentioned that “it knocked Fillmore a little bit.”

After this, Fillmore had several unsuccessful goal attempts, that were either blocked by the Dragons’ goalie Keara Fitzgerald ‘20 or entirely missed the goal. Riley Schneider ‘22, right fullback for Foothill Tech, earned several possessions for the Dragons due to her strong defense.

Schneider also assisted Combs to another goal for Foothill, off of a throw-in from the sideline. The celebration from the stadium was energetic and gleeful as the Dragons lengthened their lead to 2-0.

Schneider, discussing her strategy, adds that “as the game progressed I saw that their fast forward was on the opposite side, so I was able to make more runs forward and combine with Lily [Shadden].”

The Dragons’ defense couldn’t falter, even when Filmore pushed their offense as far as they could. Fitzgerald caught and blocked numerous more goal attempts, and Kami Kunes ‘20 kept the intensity very high, effectively stopping several of the Flashes’ attacks. This excellent defensive effort ultimately ended the half with the Dragons maintaining a 2-0 shutout.

The Flashes riled up a more aggressive offense for the second half, inching closer and closer to the goal. The stadium was on the edge of their seats when Fillmore headed the ball towards the goal, but barely missed and it soared over the goal instead.

Coach Craig says he was “a little concerned because we lost possession of the ball,” but attributed their mistakes to the fact that Fillmore was a very skilled team.

Fitzgerald’s saves were consistent, even coming far out of the goal box to stop Fillmore’s offensive plays.

Both teams had plenty of good attempts, but Fillmore finally found the back of the net due to their seamless passing and good communication.

After finally showing up on the scoreboard, their celebration was to be short-lived when the Dragons’ center forward Dylan Mullaney ‘21 scored an impressive goal and further stretched their lead to 3-1.

In the final minutes of the game, Shadden continued to put pressure on the opposing goals, with numerous goal attempts that were incredibly close. In the end, the game concluded with a 3-1 win for Foothill Tech.

The Dragons will play the second round CIF game on Feb. 25, at 3 p.m. at Patriot High School, and will be facing off against the Warriors.