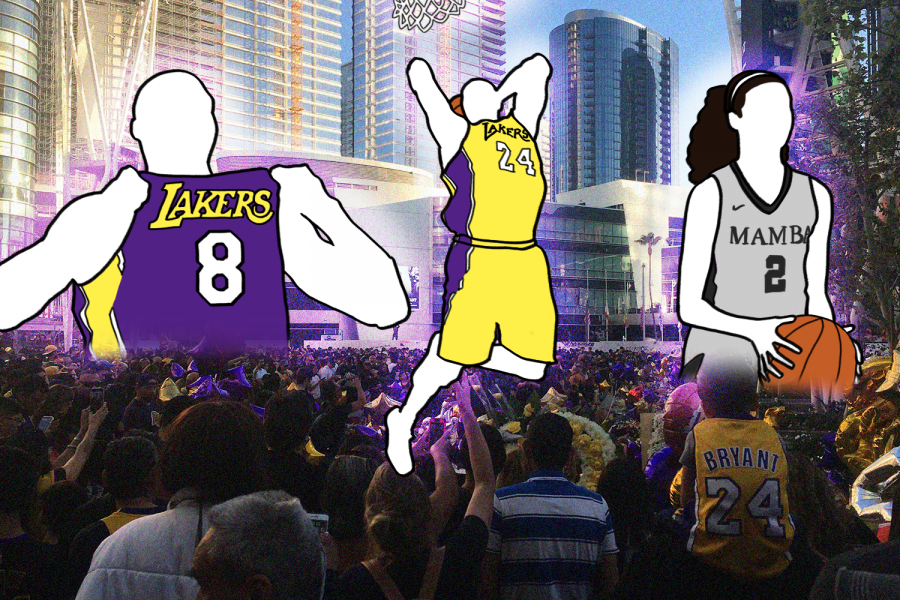 Cartoonist Lillian Li pays her respects to Kobe and Gianna Bryant with renditions of them and a photo she took at their memorial at Staples Center.

It’s been difficult for me to fully understand why your passing has hit me as hard as it did. I grew up watching your exploits on the court, but I was too young to understand what I was seeing. The sport of basketball was just a flurry of bright colors, of rushing skin and extravagant dunks and three-pointers to me. I couldn’t comprehend the rules, nor did I bother to learn them in their entirety after I hit middle school and became enraptured in volleyball.

The only reason I placed any stock in the achievements of my mysteriously beloved Lakers was because of the passion my father had, and has, for them. But somehow, for some reason, as I watched you, and Pau Gasol, and Derek Fisher, and Metta World Peace (whose name I could never fully grasp), you were important to me. You stood among the likes of Captain Benjamin Sisko of Star Trek and Paul McCartney of The Beatles in my mind; idols of my childhood, giants of men who inspired me throughout my formative years.

I cried the day you and Gianna died. I sobbed the day the Lakers paid tribute to you at their first game since your death. And I stood there, lonely tears escaping me, at Staples Center among the subdued, mournful shuffling of hundreds of people who all felt the same thing. A mass of gently swaying, plaintive comradery; a people united in tragedy.

I felt all of that in my bones, never mind the fact that I’d stopped paying attention to basketball once I reached sixth grade. At the risk of sounding like most people who mourn you, it wasn’t necessarily about the basketball. It was about the man behind the Mamba. We didn’t lose Kobe Bryant, a five-time NBA champion, former third-leading scorer, 2008 MVP; we lost him in 2016. We lost Kobe Bryant, devoted father, loving husband, storyteller—the man who inspired so many and touched countless lives in not only Los Angeles but the entire world. And it was the combination of my childhood idolization of you and the void you left in the world that made me so sad on Jan. 26.

I could sit here and wallow about how hard your death hit me, but I know for a fact that there are hundreds of thousands of people who are mourning you as if a family member—people who watched you grow up, or grew up with you, who watched you singlehandedly change the game of basketball and so many people’s lives; people who fully understood your role in their lives and who felt the blow of your death like a bullet. And I just want you to know although the world is a little darker without you in it, the light you gave in your 41 years on this Earth far outshines even the deepest of shadows in your absence. We miss you so much, and we hope you and Gigi are happy. Where ever you are.