Girls’ basketball crushes Thacher in last game of the season 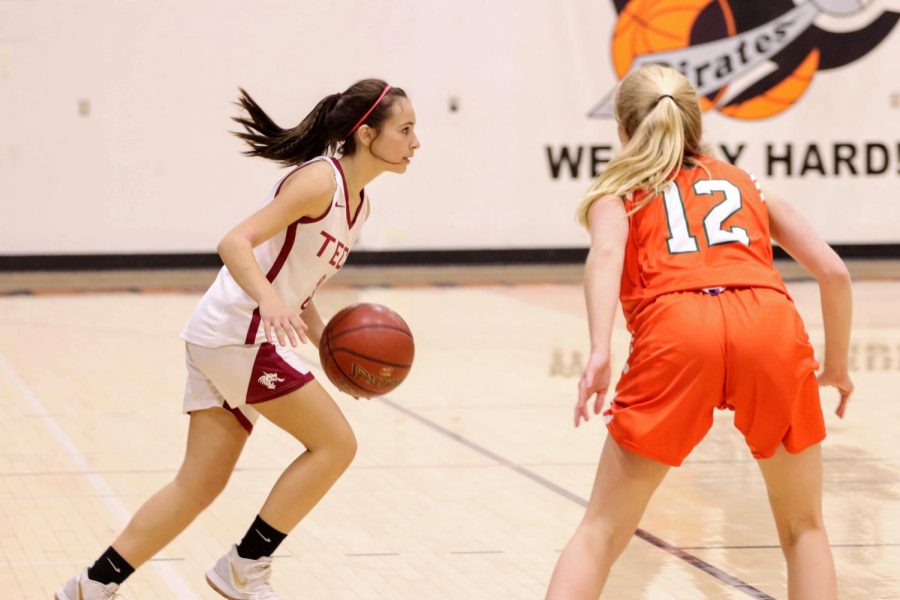 Cierra Marienthal '22 runs the ball up the court.

“Fans are on fire tonight,” says announcer David Paige on the night of Feb. 6, kicking off the final game of the Foothill girls’ basketball season. The Dragons blew away the Thacher Toads in a match that filled the entire crowd with energy. Spirit lined the walls with posters for each of the players on the Foothill team, fueling the Dragons with the enthusiasm and vigor needed to pull away with a whopping 57-17 win.

The first quarter proved the strength of the relatively young team, carrying no seniors on their roster. Olivia Huynh ‘23 said, “I think we played pretty well this season, especially for a very young team.” Starters included Rome Falcocchia ‘22, Huynh, Ashley Kaller ‘23, Cierra Marienthal ‘22 and Chloe Scofield ‘22. Although the Toads gained possession after tip-off, the Dragon defense held firm and Scofield scored first for the Dragons. Marienthal scored shortly after, and shots continued to flow in until the scoreboard rapidly increased to end the quarter 20-0.

With no score from the opposing team, the second quarter commenced with high intensity. The Toads remained competitive with many shot attempts and sunk a three-pointer to get on the scoreboard. Shots from both sides continued, but the Dragons maintained a high lead. Many numbers and set plays were served from point guard Marienthal, assisting her teammates to make scoring easy. The half ended with a score of 37-7.

In place of a senior night celebration, events were held at half time with a chance to win money and gift cards. Fans excitedly lined up for the first event: the opportunity to win a $10 gift card to Starbucks with a free throw competition where and the last fan standing would win the lucky prize. The next activity was even bigger and better than the last. Students and parents filled the court and lined up to shoot half-court shots. The first person to make it won a $100 Visa gift card.

Falcocchia commented that the “seniors all graduated last year so this was a growing year for us, but we were able to develop our own skills and we’ll come back really strong next year.”

As the half time events concluded, the Dragons prepared to continue to dominate. Overaggression led to a quick foul, and Thacher snagged two points to kick off the half 37-9. Kaller drove to the basket and spun off a Toad defender to regain control of the game. With Thacher still hungry for points, Marienthal stepped up to block a three-point shot. More fouls from both sides fill the half, increasing the intensity and fueling the cheering fans. The quarter ended with a layup from Huynh, coming from a long pass from Kaller, finishing it 50-15.

The last quarter fired up both sides, and Thacher held strong in the attempt to score. A sequence from the Toads lit a spark and they managed to put a few more points on the scoreboard. Yet the Dragon offense continued to dominate, finishing the game 57-17.

“I mean you can pick a name, they all played well tonight,” says coach Paul Tafoya. “Just very proud of these young ladies.”

The team placed fourth in their league, with Falcocchia commenting, “It was a fun way to end the season.” The girl’s basketball team looks forward to a hopeful season next year.