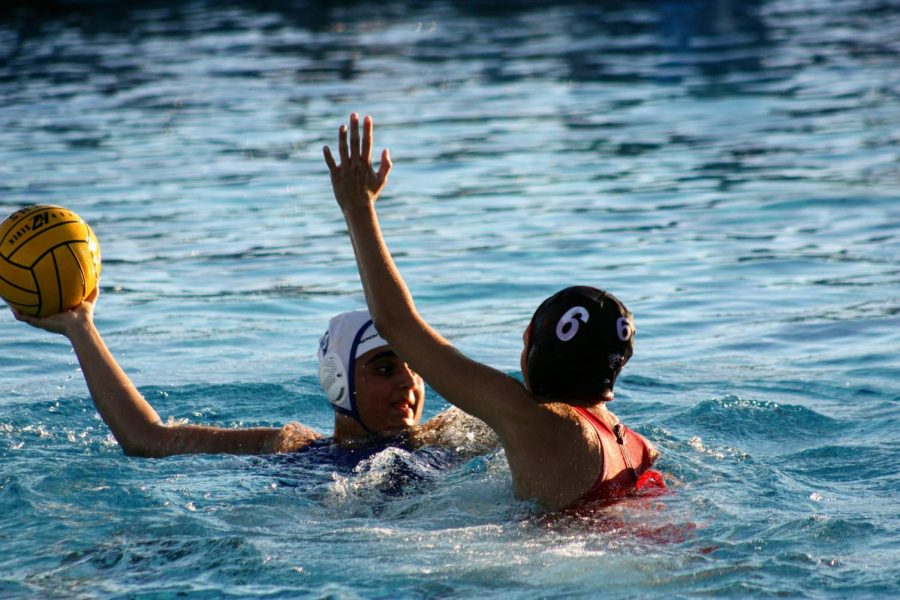 Cate moves to pass the ball, awaiting an interception from Foothill.

It was a sentimental afternoon on Feb. 3 as the Foothill Technology girls’ water polo hosted Cate School, and honored their three graduating seniors. The Foothill Dragons along with the Cate Rams lined up poolside to honor Annika Arroyo ’20, Julia Malach ’20 and Lauren Steward ‘20.

After families applauded and bouquets were bestowed, both teams jumped into the pool to escape the frigid February air, and prepped for the game.

The game began and quickly prompted excitement. The Dragons were awarded the first sprint and scored a speedy goal off their first play.

Their momentum continued, pressuring Cate to lose control of the ball many times, and the Dragons took advantage.

After dozens of steals and tough defense, the Dragons ended the quarter with an 8-0 score. Some of the goal contributors included Arroyo, Heidi Fedde ‘21, and Malach.

Foothill’s Steward won the sprint and gained an immediate goal off the play. After this, both teams exchanged possessions for a couple of minutes before Maya Murillo ‘23 scored another goal for the Dragons.

Cate made one of their few goal attempts but missed it, which was piggybacked by the Dragons’ Ruby O’Conner ‘22 scoring another goal.

After several missed goal attempts from the Rams and a goal for Foothill’s Mariah Valenzuela ‘23, the half was concluded at 12-0 for the Dragons.

The third quarter began with Emily Secrieriu ‘22 winning another sprint for the Dragons, and a goal from Isabela Borjorquez ‘23 following the beginning of the half.

After sustaining the strong league for some time, many of the Freshmen received lots of playing time.

Fedde earned several interceptions throughout the quarter, leading to an abundance of scoring opportunities, that ended successfully thanks to Borjorquez and Alyssa Cagle ‘23, who added two more points to their powerful lead.

Arroyo, who played goalie for the majority of the game, shut down every goal attempt from Cate in this quarter, dominating the blocks. The quarter ended with the Dragons up 14-0.

As a graduating senior, Arroyo described her outlook on her high school water polo career: “Although my time is really close to being over,” she says “I’m really happy that it happened.”

In the final quarter of the game, Elyce Peck ‘22 started it strong by winning the final sprint. After a couple of possessions, Cate scored their first and final goal of the game, with smiles and high energy, despite the scoreboard.

Peck regains the Dragon’s momentum with a goal, and Arroyo shocks the crowd with an astounding uncontested goal thrown from the opposite side of the pool. Dragons Angelina Longhammer ‘23 and Secrieriu scored two more goals, with a few steals in between, to end the game with an 18-1 win.

Since everyone was having an excellent game, Malach mentioned how proud she was of the team, “especially the freshman since they didn’t get a lot of playing time this season.”

Even though the league season ended, girls’ water polo will be participating in CIF this year, extending their normal season.

Arroyo feels confident going into CIF, saying “we should have a good matchup in the first round since we won league.”

Their first CIF game is Feb. 11 at the Ventura Aquatic Center against the Monrovia Wildcats.