Boys’ soccer triumphs over Laguna Blanca in a 1-0 win 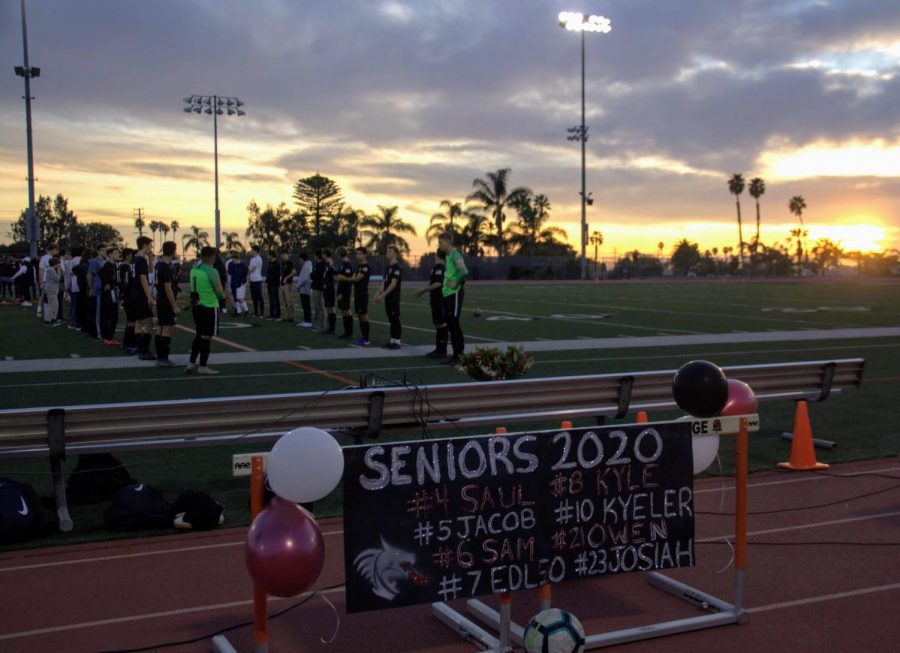 The Foothill boy's soccer team lines up to celebrate their seniors.

The evening of Jan. 31 marked the final home game for the boys’ soccer team. By having the crowd on their side, the Dragons were able to impress the crowd by defending their turf against the Laguna Blanca Owls.

Prior to the match, each of the seven players of the senior class of 2020 was individually recognized for their hard work and dedication throughout the season. Parents of the athletes also attended the field alongside their sons, showing their love and appreciation and motivating the boys to play even harder.

The referee blew the whistle, sparking the start to a spectacular match. The Owls took no time to get the ball rolling, quickly moving up the field. In return, the Dragons brought the heat and pressed Laguna’s goal. The defense took possession of the ball and moved up the field. Noticing the significant gap between the goalkeeper and Laguna’s defensive line, Josiah Jorden ‘20 quickly sent the ball up the field to Kyle Grenier ‘20 who reacted and sprinted towards the ball headed towards the far right of the field. Grenier beat the defense to the ball, made it past the keeper, but barely missed the goal in a rather unfortunate scenario. Even though Grenier missed the goal, he later stated that they “made it back up.”

The Dragons quickly took back to the field in need to ‘get back,’ in order to defend the offensive attacks from the Owls. For Jacob Girardot ‘20 “defensively [the Dragons were] definitely improving. Compared to the last game, big improvement, offensively, we got a lot of chances but we didn’t finish them.

The time approached 27 minutes until halftime and the Dragons continued to press the ball forward as Laguna struggled to withstand the offensive lineup. As the Dragons moved the ball up the field, Jorden found a way to creep the ball past the Owls defensive line to Grenier. Grenier, yet again, took possession of the ball and shot, hitting off the hands of the keeper. The ball lurked dangerously back into play and was struck again in an attempt to score, this time it ricochets off the crossbar to what appeared to be a goal, only to be mistaken as Laguna’s keeper reclaims the ball. The crowd was absolutely appalled by the play and stunned by the vast chaos near the net.

The time dwindled as 15 minutes remained in the first half. In a quick hurry, goalkeeper Luke Shadden ‘21 started the play by passing the ball from the goal line to the midline, going directly to Kyeler Brant ‘20. Brant took the ball up the field in a hustle. He shoots, the ball gets deflected off the keeper, and the ball gets put back in play. A total of five close range shots were made, until Alex Loza ‘22 managed to slip it past the opposing keeper, breaking the scoreless run and putting the Dragons ahead 1-0.

The half ended with an aggressive last two minutes, and although a couple of shots on goal were produced from both teams, nothing substantial enough passed by.

As the second half commenced, the Dragons defensive line consisting of Jorden, Brant and Giradot was constantly “working out of the back,” according to Jorden. They were effectively able to penetrate past the Owls’ defensive line numerous times, but were unable to put the ball in the back of the net.

As the Owls regained some possession of the ball, defenders Jorden and Zach Noah ‘21 controlled the defensive line, ensuring that the ball would not infiltrate past them.

While the Owls seem to be gaining momentum with a few opportunities to shoot on goal, a similar trend seems to be plaguing both teams: neither could put the ball in the back of the net.

As the scoreboard still read 1-0 with four minutes left, the intensity of the match spiked.

Even though the Dragons faced many obstacles during their match against Laguna Blanca, in the end, it all paid off as the Dragons reigned victorious with a final score of 1-0.

Girardot noted that the Dragons were able to maintain possession of the ball, contrastingly noticing that Laguna “only had two main players” that acted as “the center of the whole team.”

Coach Luis Sanchez concluded the night by commenting that “the seniors did a great job, I am very happy for all the people that came and supported. We have parents come and support their sons and give some words of encouragement.”

It may have been the last home game for the Dragons, but they earned a spot into CIF as they will compete to be better than last year.