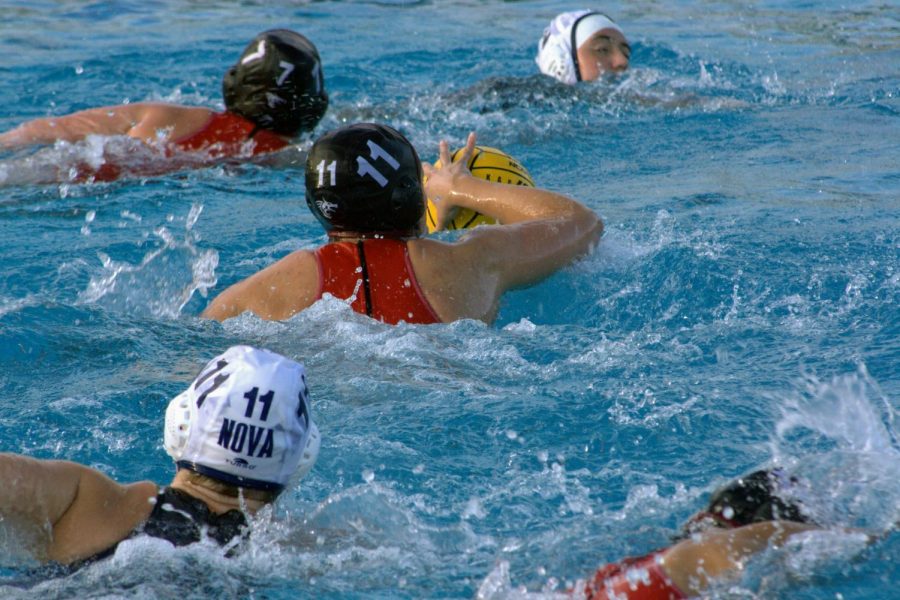 The Dragons fought hard against their Wildcat opponents and came out victorious.

Grey skies covered the pool at the Ventura Aquatic Center as the Foothill Tech Dragons were getting ready to start their first league game. The girls’ water polo team faced off against the Villanova Preparatory Wildcats on Jan. 16.

Starting the second quarter, the ball is dropped and Villanova wins the sprint. The Wildcats have the ball, but this doesn’t stop Heidi Fedde ‘21 from stealing it and giving her team a chance to score. This opportunity is taken by Arroyo, and she shoots and scores for the Dragons within the first minute of the second quarter, making the score 3-1. With this lead, the Wildcats scored two goals back to back, tying the game once again. With the game tied at 3-3, the Dragons and Wildcats both have many possessions but aren’t successful in scoring. That is until Julia Malach ‘20 gives the Dragons the lead once again with close to three minutes left in the second quarter. With the remainder of the time, the Dragons take shots at the goalie but fail to put any more balls in the net.

Third-quarter rolls around and the Dragons are leading the game. Coming out of the halftime, head coach Victoria Lee wanted her girls to “keep control of the game throughout the entire second half as we did start out in the first.”

The Dragons kept this in mind as the referee began the game. As the ball dropped, the Dragons raced out and won the sprint, giving them a strong start. With their aggressive offense, there was nothing the Wildcats could do besides foul, giving the Dragons more time to set up. With 30 seconds on the shot clock, the Dragons don’t rush giving Secrieriu enough time to set up her shot and score. The score is 5-3 within seconds of starting the third quarter. The Dragons don’t let up, adding two more goals, minutes apart, scored by Arroyo. Soon after the seventh goal is scored by the Dragons, Villanova scored their only goal of the third quarter.

In the last quarter, the Dragons went in confidently with the lead. Although they lose the sprint, they continued to play aggressively and take several shots on the goal. With five minutes left to go in the game, Villanova wasted no time to try and put in more goals. They succeeded when one of their players fired off a shot and scored. With the close 7-5 game, the Dragons and Wildcats were both eager to score. As the time ticks on the clock, the Dragons managed to keep the score the same until Arroyo scores with three minutes left. This prompted the Villanova coach to call two timeouts in order to set up a play for his team to score. It ultimately worked, and the Wildcats scored with 50 seconds left on the clock. With the crowd on their feet, the Dragons were able to run out some of the time and they secured the ball after the failed attempts the Wildcats made at scoring, winning the game 8-6.

According to Arroyo, the girls did really well and this was their best game they’ve played so for this season, as they were “working as a team.”

The Dragons will use this positive momentum to face off against their next opponent, Cate School on Jan. 21.