Opinion: Death to cars when? 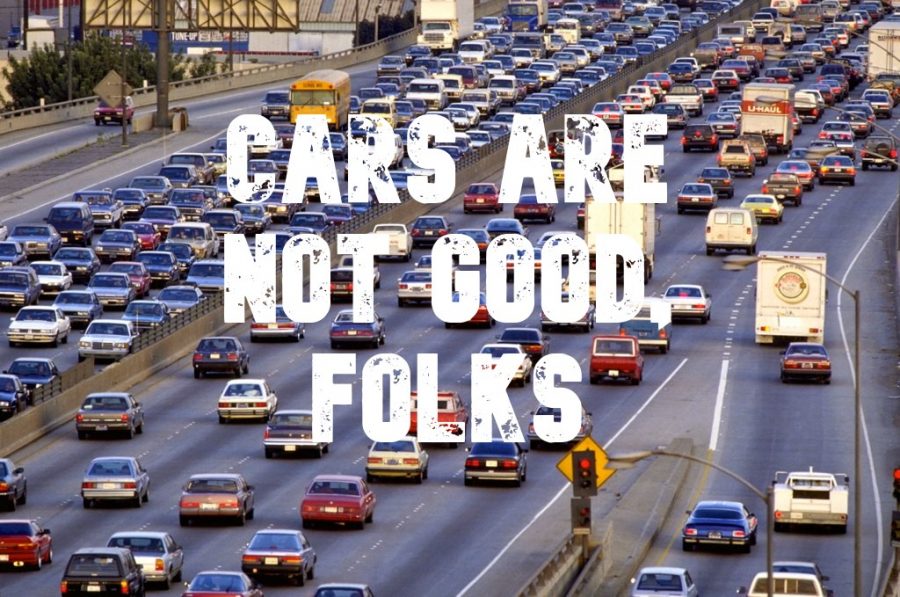 If you are a naive teenager at Foothill Technology High School, you probably thought at some point that cars were a gateway to freedom. Maybe you still do, but from what I have observed, the first month after getting your license is usually spent in pure ecstasy, and after that, assuming you’ve actually been using your license, those feelings eventually fade. You grow tired of cars and begin to realize they are aesthetically bad for our cities and neighborhoods. Go anywhere and you will see curbs and driveways cluttered by these explosion-powered beasts. These feelings are not unjustified. A better world beyond cars is possible with just a bit of attention and willpower.

I hate driving and avoid it like a chore. I hate other drivers. I hate waiting for an oncoming car on a through street only to have them turn in right before me without using their signal. I hate the idea that everybody is going over the speed limit and highway patrol can give anyone who is simply keeping with the flow of traffic a fat ticket. I hate when pedestrians lean over the curb as if to cross but then dash away into the abyss as they see me stop.

Public transportation, or really any form of transportation outside of cars, is even worse. Ever try riding the bus from Ventura College to Ventura Avenue? It takes forever. Some of that has to do with the stops it must take, but the real issue is that city buses are forced to accommodate cars. If buses were given their own lane and traffic signals, there would be fewer delays and faster trip times. Buses would finally be free from the caprices of automobile traffic and allowed to compete on their own terms.

Ventura, to its credit, improved bicyclists’ safety by painting all of those bike lanes green. Unfortunately, this also reinforced the idea that cyclists and drivers need to “Share The Road” when in reality, everyone knows that the system favors cars. Everything is built around cars. Bicyclists are infinitely more vulnerable on the road and are a pestilence for drivers. I pity anyone who thinks drivers could share the road with a larger number of cyclists without turning at least some of them into roadkill.

So as things are now, it isn’t enough to try and shame people into riding their bikes. The only thing that will make cycling more accessible is to build more bike paths. There is only one bike path in Ventura. It is mostly used by homeless people, beachgoers, thieves and escaped convicts. We need bike paths that people can ride to their jobs, friends and grocery stores en masse.

And don’t come at me with this nonsense about how we need the “hyperloop” or flying cars or those sucky-tubes from Futurama. I’m not interested in waiting around for another silicon valley techno-doofus to reveal their next big boondoggle that they thought of during a microdosing session. These transportation problems don’t exist because buses and bikes aren’t high-tech enough; they exist because they are underutilized in our society.

When I tell people about how the robust transportation systems in Scandinavia make car-centric America look like a laughing stock, I am reminded that most Scandinavians can’t afford a car, so while they may have a functioning transportation system, they pay for it with their freedom. That’s because Real Freedom™ is sitting in your personal four-ton metal hotbox on the 405 as you crack the window to get a whiff of those glorious exhaust fumes and the “cool” air that somehow turns out to be hotter than the air inside the car. Real freedom is when half of the automobile trips in the biggest United States cities travel less than three miles in a country with a projected obesity rate of 50 percent by 2030.

It is going to be difficult to make Americans relinquish their fetish for cars. Cars are a status symbol. Cars can be for hobbyists. Cars are sexy. Think of the countless magazines that feature steamy, bikini-clad women sprawled out on windows and hoods. Just think of it this way: is pollution sexy? What about traffic? Are predatory auto loans “freedom?” Of course not. Let us say death to cars, which is not an incitement of violence but rather a rejection of the car-centric way of thinking.