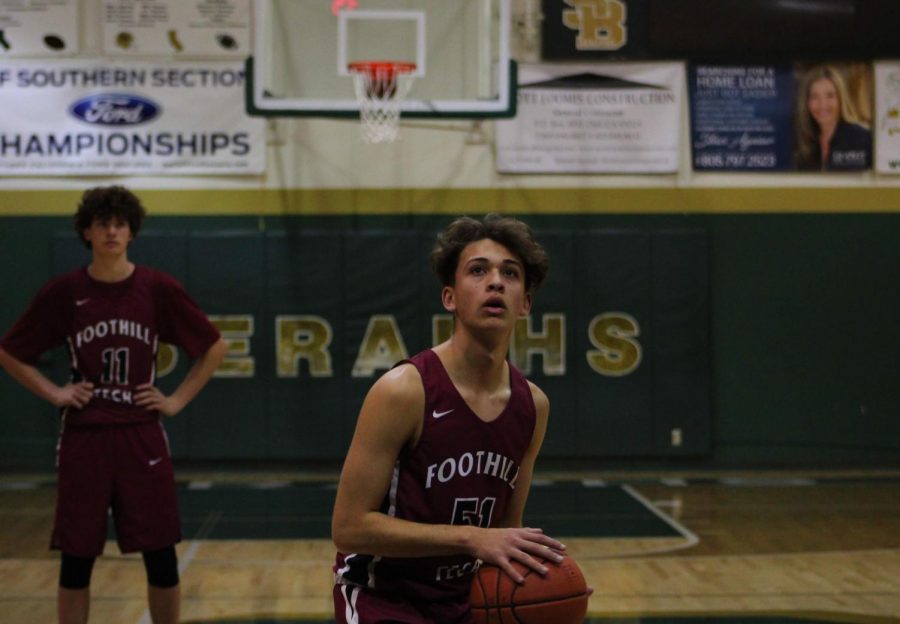 Justin Razo '21 preparing himself to take a free-throw shot.

A thrilling air of anticipation hung over the crowd that was jam-packed into the home court gymnasium of the Saint Bonaventure Seraphs on Jan. 8 would mark the first league game of the 2019-20 boys’ basketball season, and fans came from across town to watch the Foothill Technology Dragons play their rival team. The bustle and hum of the growing crowd only grew louder as the time drew nearer to seven o clock, and the players began to gather, preparing to begin the game.

The beginning tipoff was won by the Seraphs’ 6’5” center, Gavin Beerup ‘20, giving St. Bonnie the first possession of the game. After a few minorly eventful plays made by both teams, the Seraphs scored the first two points of the game, scoring an easy put-back off of an offensive rebound within the first minute of the game.

Following several missed three-point attempts from the Dragons, and some strong offensive boards for the Seraphs, Bonaventure scored two more layups, edging the Dragons 6-0. Luckily, shooting guard Brian Holloway ‘21 swished the Dragons’ first three-pointer of the game, putting them on the scoreboard for the first time.

Holloway reflected that the Dragons “started out slow,” mentioning how the Seraphs out-rebounded them in the first half.

The excitement of the shot was short-lived as the Seraphs quickly scored a layup and swished their first three-pointer of the game. In the next Dragon possession, Holloway took a drive to the basket, getting fouled on his way to a layup. Soon he was on the free-throw line, knocking down points.

After Beerup, the Bonaventure center, missed both of his free throws, Ty Macias ‘20 took a risky three-point buzzer beater and scored, giving the Dragons an extra three points for the final first-quarter outcome of 15-7 in the Seraphs favor.

Quarter two began with an offensive possession for St. Bonaventure, who began the quarter with an up-and-under layup. It wasn’t until Bonaventure’s third score within the first two minutes, that the Dragons called a timeout.

Both teams continued the second quarter with a steady give-and-take point exchange. Seraph point guard Riles Neff ‘20 notably made three consecutive 3-pointers for his team. Holloway scored two points for the Dragons off of a one-and-one foul call, since Bonaventure was exceeding six fouls by the first half.

Dragon center Bodhi McDonald ‘20 was also fouled twice throughout the quarter and made all four of his potential free throws.

While these free throws helped the Dragon’s game slightly, in between foul calls the Seraphs scored ten points just towards the end of the quarter. The Dragon’s point guard, Sam Shinsky ‘20, banked a three-point shot at the top of the key with about one minute left in the half, and ended the quarter with a swift block from Cooper Mecham ‘21. The halftime score read 43-21.

After halftime, McDonald starts the Dragons off strong with a power-move and a layup. Neff and Holloway both score three-pointers for each of their respective teams, within about a minute of each other. The Dragons had a few turnovers giving their opponents four points off of layups, and letting Neff score yet another outside shot, adding three points to Bonaventure’s substantial lead.

The Seraph’s aggressive defense began to gain some attention from the referees and they get three fouls called on them, within one Dragon possession.

The Dragons scored another two points by the end of the quarter because of a fadeaway jumper from Shinsky. However, the final points of the quarter are scored for the Seraphs off of a fast break by Neff. The quarter ended with the scoreboard reading 60-33.

The final quarter of the game began with a Dragon possession; the ball was entered to McDonald who drove to the hoop and scored two points out of the gate. After a short-lived play for the Seraphs, McDonald scores on his basket once again. The Dragons continue the streak with a clean three-pointer from Justin Razo ‘21. Coach Jamaal Brown mentioned that he was “proud they didn’t quit”, commending his team for working hard until the very end.

Neff responds with a two-point jumper for the Seraphs, but Shinsky fires back by draining another three-pointer. McDonald scores an alley-oop layup for the Dragons, but it’s combated with four layup points from Neff, for Bonaventure.

Towards the end of the game, the Dragons’ Kainoa Wilkes ‘22 aided in maintaining intensity by delivering a wicked block. DJ Allen ‘21 was fouled on a drive to the hoop and goes to the line. The game’s scoring concludes with two made free throws from Allen to finish off the Dragons’ final score. Bonaventure ran out the clock until the final buzzer rang out, ending the game with a hard loss for the Foothill Tech Dragons 74-50.

When questioned about how the Dragons plan to grow and adapt the next time they meet the Seraphs, Holloway said that they would “definitely be more physical, and locate the shooters.”

The Dragons’ boys’ basketball team’s next game will be held on Wednesday, Jan. 15 at Santa Clara High School. They will play the saints at seven o’clock.