“Cats” is a failure worth abandoning 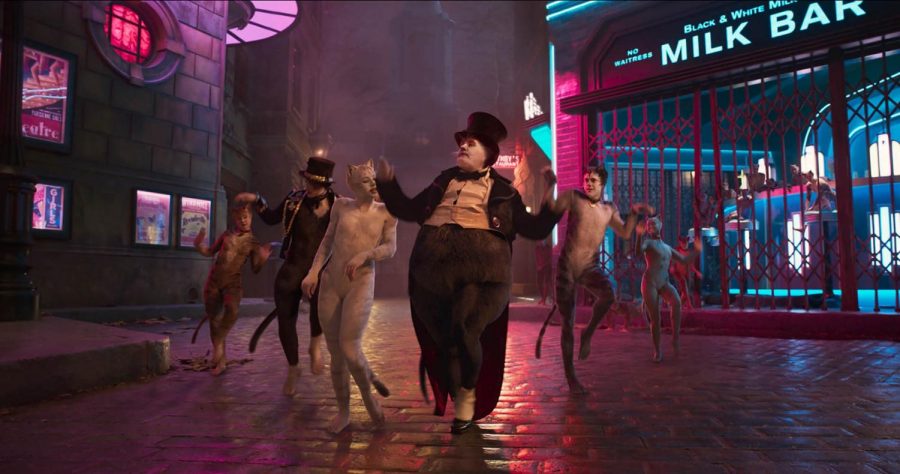 I have never watched a movie in which I wished for a train to come while I, along with the characters, were tied to the track, waiting to end my misery. But I guess everything must happen once, and this wish arose as I sat in the theatre and watched humans act like cats, dancing around the stage in skintight suits that were animated to look like cat fur. The disaster that is Cats horrified me and I don’t wish this suffering on anyone else, so go ahead and continue reading to really understand if you want to risk being scarred for the rest of your life.

Cats is focused on a storyline of a group of cats, the Jellicle cats, gathering together at the “Jellicle Ball” to determine the chosen one for gaining a new life and entering the Heaviside Layer. The group that is involved in the election process collects a select group of possible candidates, but while doing so, the notorious Macavity is wreaking havoc and attempts to eliminate the candidates in the running.

While the plot may seem generic and simple to the point that there is no conceivable way to fail at portraying the overall idea, the director, Tom Hooper, still managed to create a convoluted movie that lacked in the ability to make sense of the storyline. Not only that, but the movie as a whole was incapable of establishing a direction of the plot at the beginning of the hour and 50-minute film as details and explanations were shrouded by music that was incomprehensible at points. With the confusion that surfaced from the beginning and continued throughout almost halfway through, boredom and frustration arose, creating a not so perfect combination for the engagement of the audience.

With such an all-star cast that included reputable names like Idris Elba, James Corden, Judi Dench, Ian McKellen, Jennifer Hudson and Taylor Swift, it was a shock to see that this much talent could produce such an awkward and disjointed movie.

Seemingly, the downfall of this movie was an inaccurate portrayal of aspects and the inclusion of ideas and concepts that were more disturbing and confusing than entertaining. One of the largest issues was the setting of the movie as it was primarily created with the help of computer-generated imagery (CGI). In order to assert the concept of the human actors being real cats, a scale and proportionality were used to create a larger background to make the actors seem like they were the size of cats in the real world. This approach may have been a smart idea in the beginning but an issue was clear to see as the scale of the background was forever shifting making confusing sizes of the background and objects compared to the cats.

The CGI techniques caused more disaster when it came to the making of the “cats.” While many were off-put by the idea of people being created into cats through CGI after watching the trailer, when an individual actually has to watch more than an hour of humans as cats, the representation becomes even more disturbing. The actors maintained features of humans, such as body shape, lips, hands and feet which formed an unsettling union of two different species.

The saddest part of the movie was the fact that the talent was impressive but was unfortunately clouded by chaotic choreography and confusing songs that focused on the unknown word of “Jellicle” and spent minutes to explain each type of cat that was represented. Francesca Hayward, who played Victoria the White Cat, performed an outstanding role that was able to demonstrate the skill she has for ballet, but her raw talent wasn’t given the spotlight it deserved and was pushed to the background in order to make way for pathetic attempts at creating a dramatic, or maybe an attempt at mystical, movie.

The failure of the movie was felt all over as it earned a remarkable 19% on Rotten Tomatoes and a 2.7 out of 10 on IMDb.

The attempt to create a new version of Cats after the memorable play was understandable, but through incorrect decisions and confusing additions, the movie failed at capturing the idea that Andrew Lloyd Webber and T.S. Elliot created. It was an honest attempt, but overall, it lacked in creating an entertaining film that abstained from disturbing features and aspects.