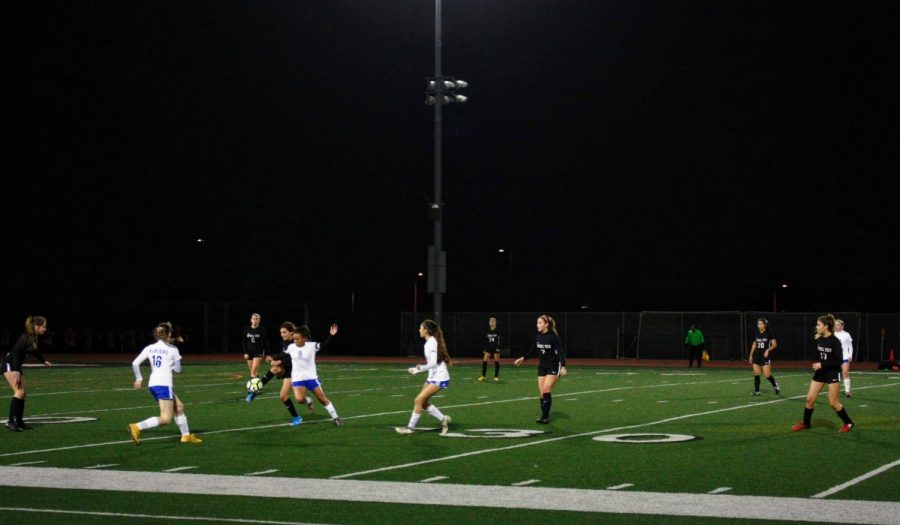 Foothill and Nordhoff clash during an aggressive game of soccer.

On Dec. 4, a cold and gloomy evening at the Ventura College soccer pitch, the Foothill girls’ soccer team arrived with intensity for their home opener against the Nordhoff Rangers. The Dragons battled hard in a very physical match and prevailed with a 3-1 victory.

There was a lot of back and forth action during the course of the game. Ten minutes into the match, the Dragons pulled their first shot on goal, which narrowly missed the side crossbar. After a couple of missed opportunities on both sides, Hannah Dearman-So ‘21 scored on a close-range shot made after slashing through the Ranger defense 27 minutes into the game.

Foothill continued taking many shots on goal and began to dominate possession time. 31 minutes into the game, Ava Sivoraraj ‘20 scored a goal off of a smoothly crossed ball from a teammate. Both teams continued transitioning the ball back and forth, however, the Foothill defense didn’t allow many shots at the goal.

With three minutes left before the half, Lily Shadden ‘23 scored a goal to put the Dragons ahead. During halftime, they regrouped at the half to strategize in order to maintain their lead.

Ten minutes into the second half, Nordhoff managed to score a goal from right outside of the box. The Dragons continued to stay aggressive and took many shots at the goal in the second half.

The team played very aggressively in order to expand their lead. Maya Diaz ‘22 played physical and knocked down a Nordhoff player when making a play for the ball.

The Dragons only allowed two shots on goal during the last ten minutes and shut out Nordhoff entirely during the second half, allowing no goals.

Head coach Jack Craig stated that for having played in only one practice with the entire team, “the girls connected a lot of passes and made the right plays,” and believes that this match was a “good place to start.”

Dearman-So stated that she felt that her team’s connection was “great even though it was our first game” and that the team overall performed very strongly. For improvements for next time, Shadden stated that they all still need to “learn everybody’s name” along with adding “more communication on the field.”

The Dragons will play in their next game on Dec. 7 against Hart High School at the Westlake Soccer Showcase in Westlake High School.