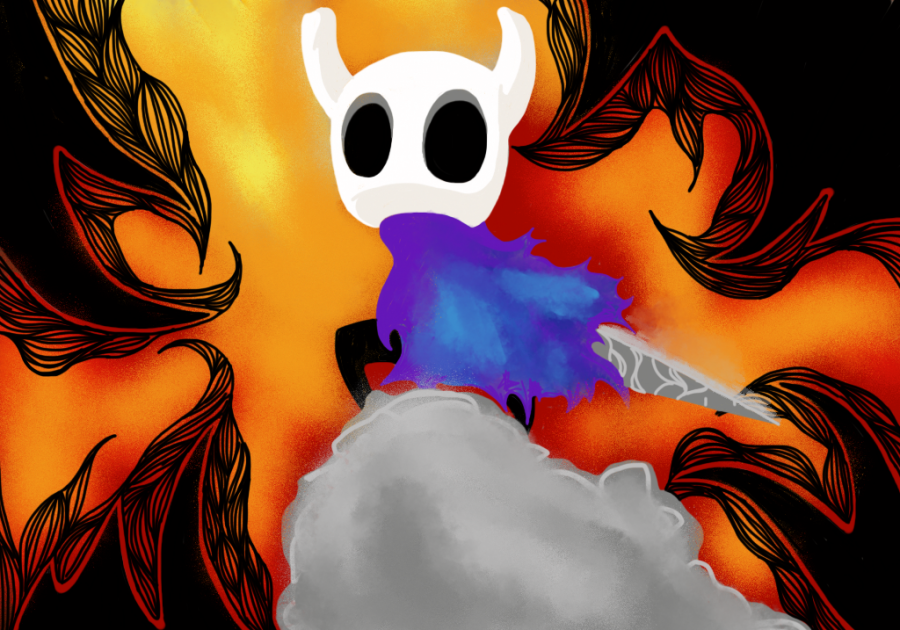 The Hollow Knight is a popular video game that allows the player to explore vast terrains of unique scenery.

As a critically-acclaimed video game, Hollow Knight definitely lives up to its reputation. It is a game from the Metroidvania genre, but it’s distinct from the endless flood of Metroidvania type games that have been released in recent years.

Firstly, the game is endlessly subtle with the way it tells its story, which is a refreshing break from games that are extremely reliant on a story. This allows the players who are interested in the lore of the game to stop and read the dialogue and those who want to just get to the next fight, to skip it. The player watches a cut-scene at the beginning of the game in which the knight, the main character of the game, is wandering down an old path, jumps down a ledge and the game begins. This is all the information the player gets before they start the game, and much of the game is like that first cut scene, wandering until you stumble on something interesting.

The combat in Hollow Knight is thrilling due to a combination of super-tight controls, difficult but creative enemy design, and the highly customizable charm system. The knight fights with a nail that can attack up, down, left, and right. While this, along with an array of four spells, is a fairly small repertoire to choose from, it accomplishes the task of allowing the player to seamlessly weave together abilities and nail slashes without overburdening them with an unnecessarily complicated set of moves. Also, the charm system allows players to passively buff themselves. Meaning that no charm will give the player a completely new ability that they control, but rather, either upgrade one of their existing abilities, like increasing the damage or range of the knight’s nail, or give the knight minions to help him attack enemies.

The player has a soul meter and masks. Each time the knight gets hit, he loses one mask (except for a few tougher bosses who impose two damage). When he gets down to zero, he dies and respawns on the last bench he sat at. However, by hitting enemies, the player gains a soul that allows him to heal mask shards and use spells. Sometimes when fighting a particularly tough enemy, the player is left with no soul and only one mask shard. This excellent game design forces the player to attack and be on a tactical offense to gain soul and heal.

The combat in this game is fun, but it can be extremely difficult at first which can scare away new players. It’s a very souls-like game with the benches very similar to bonfires and the very high difficulty curve that expects death and failure. But unlike Dark-Souls, it’s always fair, it’s never bad game design or a truly-unbeatable boss. If the player dies, it’s the player’s fault, which makes the victories that much sweeter.

This wandering around, walking and dashing through gorgeously hand-drawn rooms is so satisfying. The game rewards the player for searching everywhere for a hidden room or a false wall with things like geo-deposits (the game’s currency), a new equipable charm, a mask or soul shard. Each mask shard is 1/4 of a mask and upon collecting four, the player is rewarded with another mask, which is the character’s form of hit points. Each soul shard is 1/3 of a soul vessel increases the player soul capacity by 33 percent.

The last great thing about Hollow Knight is its amazing ability to set its tone by its gorgeous art direction, by Ari Gibson, that makes the player feel like he’s playing a cartoon, and its beautiful but eerie soundtrack composed by Christopher Larkin. This combination of sublime art and a masterfully composed soundtrack gives off a distinct tone for each section of the map. The luscious and overgrown rooms of Green Path could never be confused with the dark, quiet, and nearly monochromatic area of The Abyss, or the energetic and pink area of Crystal Mound.

Whether it’s the incredibly detailed and creatively interconnected world, the extreme difficulty that is never unfair, the inventive enemy design, or the unique charm system, Hollow Knight seemingly has it all. I give it a 9.7/10.