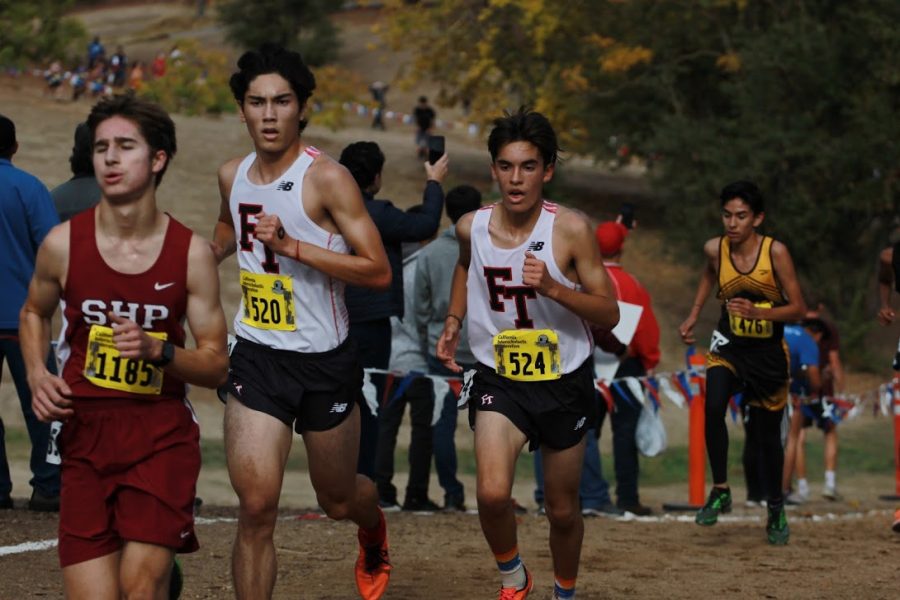 From the 2018 state finals, Jason Messner and Joshua Villasenor work up the hill at the two-mile marker.

The Foothill Technology Dragons boys’ and girls’ cross country teams crushed it in their preliminary and final CIF races, both teams placing high enough to qualify for the state championship.

The Dragons’ glowing placement qualified both teams for the Southern Section CIF Finals meet, however, these results weren’t even close to the full capacity of what the Dragons were prepared to bring.

The following weekend, on Nov. 23, the Dragons reconvened at the Riverside Course to achieve their season-long goal of qualifying for the State Meet, and they did just that. The girls’ team placed sixth among the finalists, with a score of 191, and the boys’ team placed first, earning a score of 99.

The top finisher for the Dragon girls’ team was once again Secreto, placing second and timing significantly faster at 17:28.0 for the same course.

“I don’t think that a lot of the girls in the race really expected me to be there,” said Secreto, mentioning that last year she placed 15th in CIF so she was very excited for her improvement.

Top finishers for the boys included Joshua Villaseñor ‘21 who placed third and timed 15:03.7 and Pick placing seventh with a time of 15:27.2.

Villaseñor also stated, “I have no doubt that we will win state” mentioning that they’ve “put in the work over a very long season.”

One of the two cross country coaches, Jason Dinkler said that “the goal this week during practice is just to keep their minds sharp, and to make sure there really are mentally focused.”

The CIF title is in the bag for the boys’ cross country team, but who knows what’s in store for the Foothill Dragons in the State Meet.