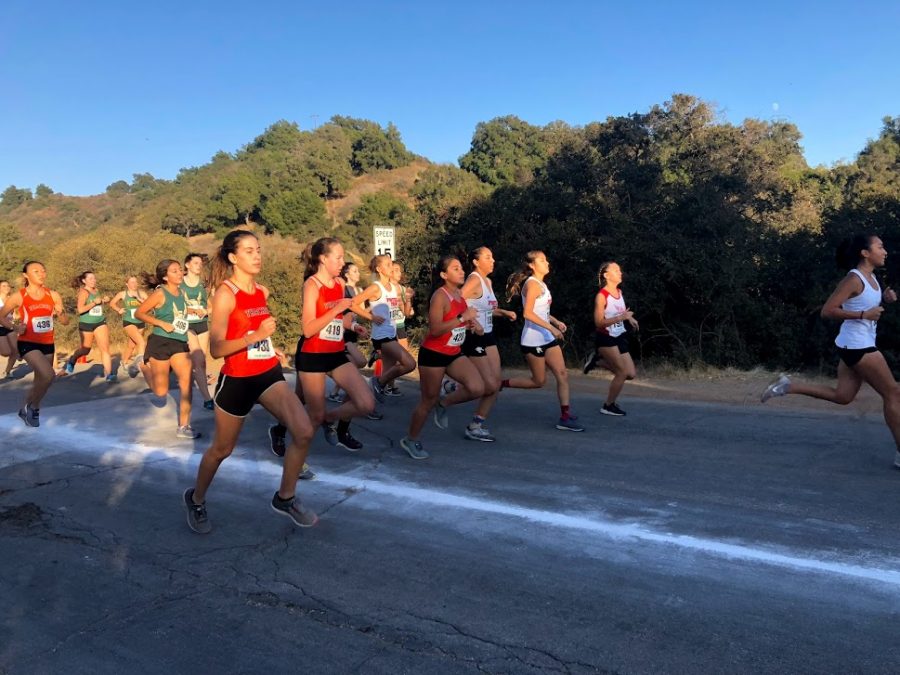 Packs form at the start of the girls varsity race

On a warm and bright afternoon at Lake Casitas, the juggernaut that is known as the Foothill Technology Cross Country team swept the Tri-County Athletic Association (TCAA) League Finals meet, finishing first in the junior varsity (JV) and Varsity events for both genders. The Dragons successfully defended their fifth straight league finals championship. This meet was a qualifier for the next step of their season, and the Dragons are now en route to CIF Prelims.

The Dragons raced against seven opposing teams: Providence (Santa Barbara), Laguna Blanca, St. Bonaventure, Cate, Bishop Diego, Thacher and Santa Clara. Both the boys and girls varsity and JV teams competed in a laborious three-mile race. In preparation for this crucial meet, the Dragons exercised various methods of skill development, including “our training here [at Lake Casitas]; we train here once a week and we try to make it our home court,” which Finn Blacker ‘21 felt to be the best strategy.

The boys’ team came out strong, with Josh Villasenor ‘21 leading the way and maintaining throughout the race, finishing in first place with a time of 15:41.9. An immediate pack of boys runners tailed right behind him with Oliver Pick ’21 in second place (15:51.7), Ethan Crouch ’21 in third (16:23.8) and Blacker in fourth (16:33.1). The boys’ team took first place in the race, with Thacher close behind in second and Cate finishing third.

Assistant coach Jason Dinkler felt that his team “did fantastic” as each of the teams finished league champions, and while there were some notable individual performances, “the team as a whole performed really well.” Due to CIF looming, the first seven Foothill runners will be competing in the next phase of the season. These athletes, along with several alternates, will continue training to defend their honor.

The Dragons are now five-time defending league champions in their sixth year as a program, which furthers the brand that Foothill cross country is known for. Kianna Flores ‘21 reinforced their dedication, and stated that “we have been working on this meet for maybe about five months now,” and that “it’s definitely good to see the progress that we have made as we have grown as a team.”

New to the program, Jonah Billings ‘23 finished first in JV and qualified for CIF, as he owned a top seven time for male Foothill runners. He considered his performance to be “pretty alright, as this was one of the tougher courses.” On the other hand, varsity runner Roy Guan ‘20, who also qualified for CIF by finishing ninth overall in the varsity group, stated that he found some areas where improvements could be made: “hills and my mindset […] especially when it comes to hills.”

Luckily for Guan and most of the team, the CIF prelims and finals courses are “strict flat-courses” which are run using flats, an area Dinkler considers a strength among the team.

The Dragons will compete next at the Division IV Southern Section CIF Prelims on Nov. 16 at the Riverside Community College course. If the Dragons finish in the top eight places of their heats, they could advance to the CIF Finals, which is the state meet’s qualifier.

The Dragons are ready to take on that challenge and defend their past victories.

“After this, we are going to win finals, then state,” stated Blacker and Villasenor grinning.

To view the complete results from the TCAA League Finals, click here.