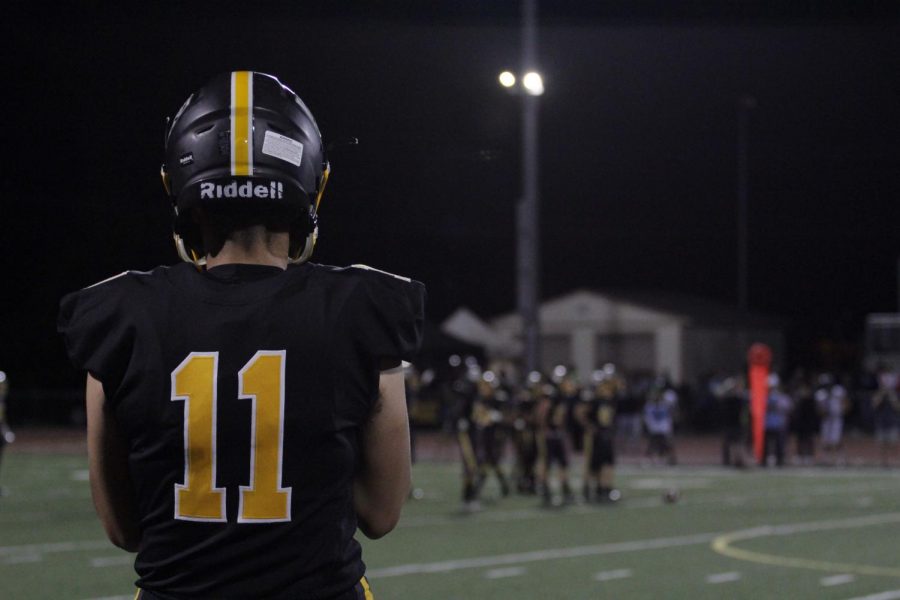 Roy Almalab '20 watching his team on the field

The iconic and timeless Buena vs. Ventura rivalry continued in its 56th-year-anniversary game. Oct. 25, a warm Friday night, proved to be more historical than any average football game for the Cougars. This blow-out win marked the 10th year in a row that the Ventura High School Cougars beat out the Buena High School Bulldogs.

The anticipation in the air was visible, with stands from both high schools filled out, as early as  30 minutes prior to the coin toss. Parents and students from Buena and Ventura alike gathered at Ventura High School’s Larrabee Stadium to witness the famous and well-known rivalry matchup. The night began with a small senior night celebration for the Ventura team, where they honored their 23 seniors graduating this year, who were gifted flowers and snapped pictures with their parents and loved ones.

The Cougars won the coin toss and decided to receive first, letting the Bulldogs start off with the kick. The first few minutes were slightly uneventful until Ventura quarterback Cade Ledesma ‘21, spotted his teammate, Jadon Cline ‘20, at the opposite end of the field and threw him a 26-yard pass right into the endzone, scoring the first touchdown of the game. The Ventura stands provided a deafening response with their enthusiastic celebration. Following the touchdown, Cougar kicker Rourke Rieman ‘20 brought Ventura’s lead to 7-0 with a made field goal, but the quarter had barely begun.

Several switched possessions later, Buena was taken to a fourth down with only one option: a punt. Unfortunately for the Bulldogs, Ventura wide receiver Zack Rodriguez ‘20 wasn’t putting on the brakes. Rodriguez caught the punt and ran a 65-yard punt return right into the endzone for another Cougar touchdown, and another Cougar field goal. The quarter ended with Ventura up 14-0.

As the second quarter began, the Bulldogs started off strong with several long runs, and finally a rush that placed the Bulldogs one yard away from a start on the scoreboard. Bulldog Bruce Powell-Mathis ‘20 finally managed to close the gap, scoring them Buena’s first touchdown of the night. After their made field goal, the ball was kicked off and Ventura was hungry for more points on the board.

One or two incomplete passes later from Ventura, Cline was back at it again with a 33-yard run all the way down the field, further shrinking Buena’s confidence levels on the field, and boosting the Cougar’s lead to 21-7.

Josh Jones ‘20, a player in his final year on the Buena team, said “We just killed ourselves getting in our heads.”

The rest of the first half was filled with a few of Powell-Mathis’s unstoppable runs, and a plethora of incomplete passes on both teams, but the half ended with the same score of 21-7.

The third quarter, although beginning with Buena’s possession off Ventura’s kick, was an exciting one for the Cougars. Within the first four minutes of the quarter, Cougar Dane Kapler ‘20, adds another 6 points to Ventura’s already dense lead, with a 63-yard run. After a field goal, the Cougar’s lead widened to 28-7.

The Bulldogs refused to go down without putting in all their efforts, and soon after the Cougars’ touchdown, had a precise 37-yard endzone pass from the Buena quarterback, Jack Chavarria ‘22, to Jack Geier ‘22 to finally pull the Bulldogs back into the game. After a field goal made by Bulldog kicker Taylin Butterbaugh ‘21, the score was settled at 28-14 with Ventura in the lead.

On the next Cougarpossession, running back Kapler had a 26-yard rush into the end of the field, and the Ventura crowd went wild, however, the play was called back on a hold. The disappointment in the Cougar stands was tangible, but the Bulldog side celebrated the call.

The Cougar quickly went to work with a rush, making it down the field to the first-yard line. Quarterback Ledesma finishes off the last yard with a rush, followed by a field goal from the kicker, extending the Ventura lead to 35-14 by the end of the third quarter.

Buena came into the final quarter ready with one of their best offensive assets, Powell-Mathis, who quickly pulled the Bulldogs back into the game with a one-yard touchdown (35-21).

Cline, linebacker for the Cougars, retaliated with a near 45-yard run down the field, gaining a first down. Once Ledesma had ran the Cougars 25 yards, getting them to the one-yard line nearest to their endzone, Cline jumped over the charging scrum of players blocking his way, earning yet another thrilling touchdown for Ventura. After the field goal, the score was 42-21.

Cline mentioned, “we’ve been preaching all week that we’ve got to keep the momentum in our favor,” and seeing as they did just that, he added, “I feel like that helped us with our win in the end”.

As the game was coming to a close, with nearly five minutes left on the clock, the Bulldogs were giving the game their last efforts. Quarterback, Chavarria, threw an 18-yard pass to Jones, who scored their last touchdown of the night, and solidified their last six points, followed by a field goal (42-28).

To top it all off, in the last minutes of the game, Cougar wide receiver Rodriguez takes the last run all the way down the field into the endzone. He sets the final score of the game in stone: 49-28.

The Bulldogs gave it their best efforts in those last minutes but the game was settled. With about 15 seconds left on the scoreboard, both teams walked off the field, letting it the clock run and finalize the end result.

Cline, describing the excitement of his team on this monumental win, said, “We all worked really hard as a team to accomplish this goal”. He also added, “I really feel like we earned it.”

Buena had a more somber perspective. “Our defense and our offense needed to just come up and step up, we all needed to step up,” said Jones describing the faults of the Bulldogs and what they needed to do better.

Buena will have another chance at redemption next year to try once again to break their 10-year losing streak, but this season was not in the cards for them.