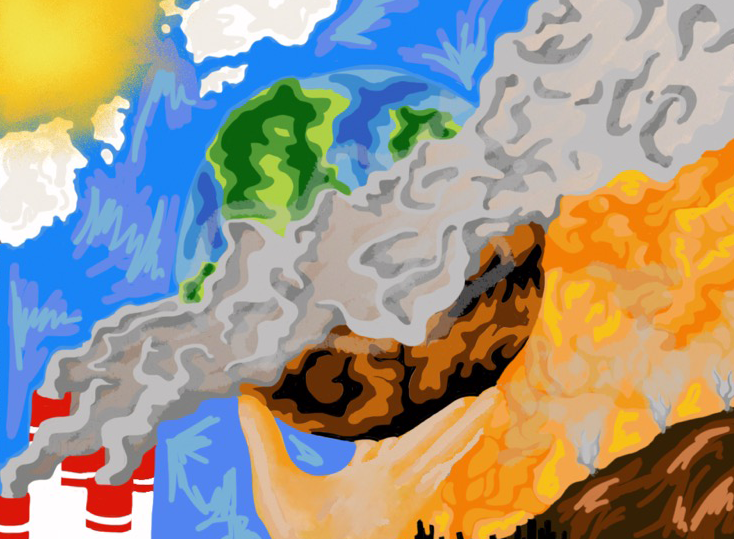 If climate change policies don't change soon, the Earth will be past the point of no return

Governments need to make the switch to renewable and carbon-neutral energies now before the path that they’re taking leads to apocalyptic-amounts of greenhouse gasses in the air.

As of now, a sizable majority of American electricity production is through fossil-fuels. According to the US Energy Information Administration, only about 17 percent of our electricity is renewable energy (hydroelectric 7 percent, wind 7 percent, solar 2 percent, geothermal 1 percent and biomass 2 percent) another 19 percent of our electricity is from nuclear power plants, which are better than fossil fuels because nuclear energy is carbon neutral but not as good as renewable. The other 63 percent of our electricity comes from fossil fuels (coal 27 percent, natural gas 35 percent, and petroleum only 1 percent). According to the International Energy Agency, 33 percent of energy globally is accounted for by coal, (there is even more coal used in the iron and steel industries as well) while 22 percent is accounted for by natural gas. While the percentage of global energy that fossil fuels account for has gone down in recent years; it is still at about 80 percent.

Because the earth’s temperature annually has on average been higher and higher every subsequent year, the ice caps are now melting, and because the ice caps are now melting sea levels are rising and will continue to rise as the ice continues to melt. This heating of the earth, also known as global warming, disrupts ecosystems globally. If just one variable is changed in an ecosystem, even just slightly, the entire system will undergo drastic change. If the change is drastic enough, like for example, the decreased global population of bees, it can affect us and our food supply.

There is some absurd speculation that climate change is not in fact caused by humans. Some claim our hundreds of years of polluting the air and chopping down trees has had no effect on the climate, and that it is simply natural processes. A study found that 4,014 abstracts of research papers out of 11,944 took a stance on the cause of global warming. 97 percent agree that global warming is caused by humans. It’s ridiculous to make the claim that there’s no evidence for humans being the cause of global warming, and it’s preposterous to try to make the claim that there’s no consensus among the scientific community. If the effect continues to progress unhindered, numerous negative effects will ensue: As the ice melts, oceans will rise and cover places where humans currently live. Ecosystems will be disrupted, which means mass starvation and extinction. There will be noticeably hotter days, and places with arid climates will get even less rain while places that used to get rain now get floods.

That’s why changes have to be made, and they have to be made fast. There are plenty of viable options and it will continue to get easier as renewable carbon-neutral energies become more advanced. As they become more advanced, it becomes more and more appealing to make the switch over to them. It is likely to take a toll on any economy while switching over to carbon-neutral energies, but it’s either that or a global catastrophe, and if you think a global catastrophe isn’t going to take a much greater, long-term toll on the economy, then please take your head out of the sand.

I’ve already mentioned some of the common carbon-neutral energies that are available now (hydroelectric, wind, solar, geothermal, biomass and nuclear). None of these energy sources release carbon into the air and they are all, with the exception of nuclear, renewable. The good thing about these renewable energies is that they can keep improving in efficiency as we continue to research and study them.

A good way to incentive the use of carbon-neutral energies and incentivize the use of carbon positive energies is something called carbon pricing. This is where the government puts a tax on carbon. The more carbon a company emits, the more they have to pay, the less they emit, the less they have to pay. This way, companies have good reason to not use fossil fuels, and a good reason to invest more in carbon-neutral energies.

One fairly common misconception that I would like to address is that nuclear energy is really dangerous. While there is a risk—it’s far less dangerous than coal. The air around coal plants is extremely toxic and causes illnesses and death. While nuclear power does emit radiation, it only does so in immediate proximity, making it possible to safely handle. But coal when burned just goes up into the air and surroundings making it impossible to completely avoid (Other sources backing the fact that coal is more dangerous than nuclear energy: one, two, three).

The last alternative that isn’t yet viable is fusion energy. This is by far the best source of energy and it would be seemingly limitless. The fusion of two atoms, deuterium (D) and tritium (T), if done correctly could produce enormous amounts of energy. Deuterium can be distilled from sea-water so it’s practically limitless. Getting tritium is harder, more complicated and decays quickly. The main bonus of Fusion is that it’s roughly four-million times more energetic than a chemical reaction like burning fossil fuels. Because of its low fuel consumption yet high energy output, it’s very economically efficient.

Ultimately, governments need to do something: whether it’s just forcing companies to switch to carbon-neutral energies, or if it’s carbon pricing to incentivize those companies to make the switch, something has to be done quickly. We’re running out of time; we’re already starting to experience the effects of global warming and climate change. Switching to better methods may not be easy, but it needs to be done, for everyone’s sake.