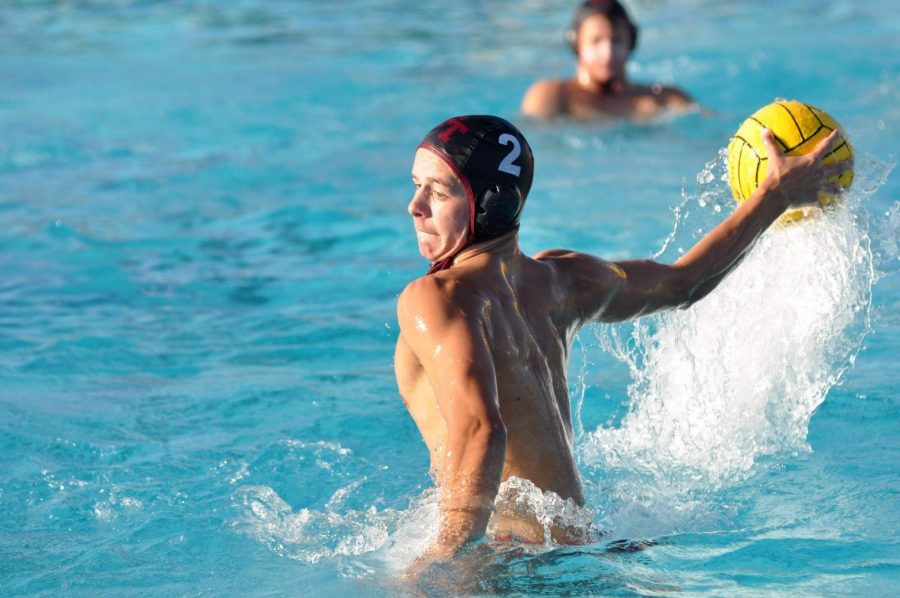 Nikolai Haines '20 winds up for a shot

The pool was lined with spectators of all kinds, from little siblings to grandparents to a lively student section. Such was expected for a matchup like this one: the Dragons had never beaten Malibu in league, but had prevailed for the first time ever in a near 9-8 victory in the Conejo Classic tournament earlier in the 2019 season. Inspired by the possibility to change history, the boys were fired up as they took to the pool.

The buzz of excitement was apparent from the ball drop. Levi Davis ‘22 remarked that this game stood apart from the rest because there was so much on the line, and the aid of the student section “just brought all the hype up, it made us play way harder and we worked way harder.” Unafraid of entering the splash zone, students lined the back of the goal, ready to exclaim at any turn in play.

The Sharks came out hungry to uphold their reputation from quarter one. Malibu’s strong, succinct passing produced an open shot on goal and an early 1-0 deficit for the Dragons. Though their initial energy began to wear off, Davis, Ram Pierce ‘22 and Jack Ryan ‘21 all scored, yet the score remained with neither side ahead at 3-3.

The second eight-minute segment began with aggressive defense across the board, forcing the Sharks to run out of time on the shot clock before they are able to produce an offensive play. A combination of blocks and hustle plays led the Dragons to continue to suffocate their opponents and push to lead 5-3. Even when the Sharks have a 6-on-5 advantage due to a foul, they are unable to create offense against the Dragons’ rock-solid defense. As evidence of their hard work, Ryan is able to finish another opportunity, ending the first half 6-3 in the Dragons’ favor.

Davis brought the energy from the start of the second half by quickly sliding a shot past Malibu’s goalkeeper, further extending their lead. As the intensity and urgency picked up on both sides, the water was as choppy as a windy day in the ocean. The Sharks regained energy as a zooming shot hit the top crossbar, and was put into the back of the net off the bounce. Due to a lull in defense, the Sharks sneak a shot to pull up to 7-5, then finish a penalty shot to nearly tie the game at 7-6.

Fired up by the opposing team’s comeback, the Dragons rush to win the ball drop. Through matched intensity, each team inched their way ahead with anything the opposite side gives and closes the regular game out in a tie, 9-9.

As the six boys reentered the pool for the ball drop in the three minute overtime, the tension seemed to be cuttable with a knife. Both teams took their time settling back into their rhythms as neither team was able to produce a shot on the net. Though the momentum shifted back and forth, neither side could pull out a play to push ahead.

The second overtime section began similarly, with the level of urgency ramped up. Through discipline and perseverance, the Dragons were able to create an open opportunity for Nikolai Hanes ‘20 to end the game. Aware of the weight on his shoulders, and after fighting through two overtimes and numerous timeouts, Hanes lobs the ball just over the keeper’s shoulder to put the Dragons ahead with just seconds left in overtime. Hanes grinned gleefully at the crowd as the buzzer sounded and the game concluded with a 10-9 victory for the Dragons.

With a 4-0 record in league, the Dragons have a strong chance of making into CIF playoffs with a high seeding. However, before they can get there, the Dragons need to put a few more wins under their belt.

Bishop feels that in these next few games they need to mix their individual skill sets with an overall game plan to yield success by “not just playing by ourselves; we need to work together as a team.”

The Dragons will match up against the Sharks for the second time on Oct. 31 at Malibu High School.