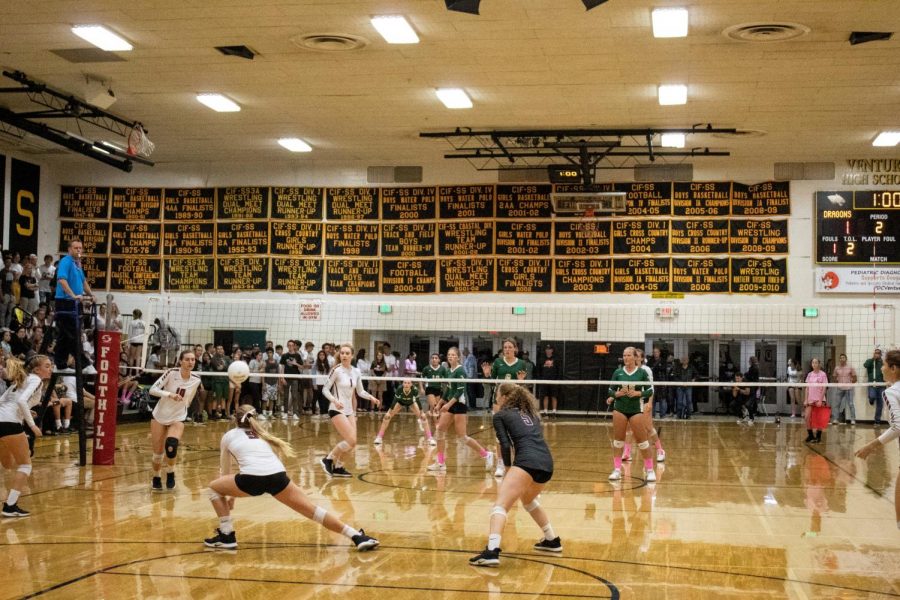 The Dragons fought hard through all five sets against rival Seraphs

Excitement and anticipation filled the Ventura High school gym on the night of Oct. 15 as Foothill students flocked in to watch their girls’ volleyball team face off against cross-town rivals, the St. Bonaventure Seraphs. The combination of the senior night presentation and the Dragons’ previous loss earlier in the season against St. Bonaventure made this a game that could not be missed. Though the crowd energy and high spirits propelled the Dragons into a 2 win lead on the Seraphs, victory slipped from their grasp in a crushing moment for the team.

Senior night was both a time of joy and sadness as the younger Dragons honored their elder teammates. Parents and seniors were brought in front of the crowd with flowers and applause.

Once the game began, it immediately became apparent that the Foothill supporters were there to see their team win⁠—subsidiary cheers frequently emerged from the crowd, and the stands exploded with excitement at the smallest plays.

The game began with an excellent display of offense from the Dragons. Although several balls dropped on the Dragon’s side, the serving work of Lexi Donnelly ‘21 and aggressive kills from Nicole Najera ‘20 brought the team into a 25-18 win over the Seraphs.

This momentum carried into the second game as the crowd grew louder and the Dragons brought heat and grit. The rallies were short and typically ended with the Dragons either getting a kill or letting the ball drop. Regardless, the game felt as if it were in the control of the Dragons. Despite the Seraph’s calm demeanor, it appeared as if they could not keep up, leading to a 12-25 win for the Dragons, putting them ahead two sets to none.

The crowd began to settle as the third game began. After all, it appeared as though the Dragons would continue their dominance. However, after several successive errors were made, the Seraphs stole a 10-17 lead. Although the Dragons ground out another 8 points, the game bafflingly went to the Seraphs with an 18-25 win.

On the opposite end of the gym, the supporters of the Seraphs continually grew louder and louder as their team scored point after point. Even though signs of previous aggression showed through kills and a few blocks, the Dragons appeared to grow more and more exhausted as the Seraphs took the game with a 20-25 victory for game four. The final game of the night went back and forth between the two teams for the first 10 points of the game. Despite the Dragon’s attempt to make a final push for victory, the Seraphs took the win with a final score of 13-15.

In spite of the heartbreaking loss, the team was optimistic about their performance. “I think overall the game went really well… we played well all the way around,” Fae Armstrong ‘21. Both Armstrong and teammate Nicole Najera ’20 had similar insights on the future of the team.

The Dragon’s next challenge will be at CIF On Oct. 25.