After a slow start, the Dragons crush the La Reina Regents 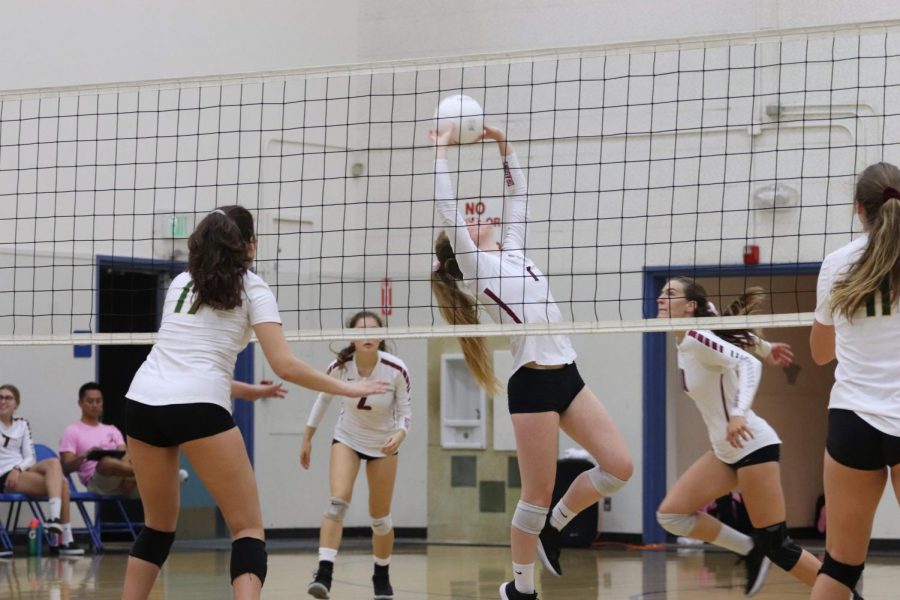 The buzz in the Cabrillo gym was high as the stands filled up with fans donning pink shirts for breast cancer awareness on the evening of Oct. 8. The excitement between the Foothill Technology Dragons and the La Reina Regents was boundless as they warmed up and prepared for a battle of attacks. In their final league game in their home gym, the Dragons played with tenacity and managed to pull away with the win in four games.

The first game started with a strong serve from libero Ashley Pazen ‘20. The score tilted back and forth between the Dragons and the Regents, but the powerful spikes sent by the Regents eventually gave them the lead. The Dragons struggled to stay together eventually giving the Regents the win in set one with a score of 25-19.

After an upsetting set one, the Dragons came out swinging in game two, pushing to a 10-1 lead, instigating a time out from the opposite team. With consistent kills from Maliah Juker ‘22 and widespread consistency as a team, the Dragons edged over La Reina, ending set two at a score of 25-8. The Dragons returned to their bench in a rush of excitement, setting the tone of the rest of the match.

With a match score of 1-1, set three tested each team’s ability to be strong-willed, filled with volleys and great digs from Ashley Pazen 20’. Although the Regents came out unfazed from set two with an intense offensive push, the Dragons were able to overpower them with strong defense, giving the Dragons the upper hand in the match at 2-1.

After two straight wins, the Dragons came on to the fourth game with confidence in their ability to maintain their momentum. The Dragons forced a lead at the beginning and went ahead 8-4. They continue to extend the lead with blocking from all around the court. At the last play, the ball volleyed back and forth until the Regents hit it out of the court giving the Dragons the win with a score of 25-11.

The Dragons cheered as they won the previous three sets with double digits. Although they lost the first set, they remained strong and changed their mentality from victims to victors.

“I think individually we all told ourselves, we can’t do what we did before, we need to step up to the plate,” Ashley Pazen ’20 said.

The Dragons will have their next league match, their rivalry game and senior night, at Ventura High School against St. Bonaventure on Oct. 15.